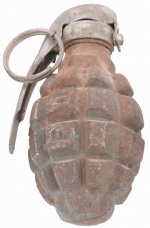 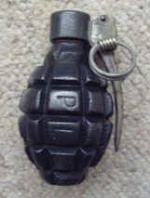 The F1 hand grenade was designed in France during World War I and used until after World War II. As early as 1915, the Fusante 1 hand grenade was introduced into the French army. It was oval in shape and resembled a small pineapple with deep grooves on the outside. The first models had a simple percussion fuse with a brass protective cap. To activate, the cap had to be pulled off and the hand grenade had to be struck with the fuze on a hard object. A percussion cap then ignited the fuse, which consisted of a simple detonating cord with a crimped-on detonator.

From 1916 onwards, the automatic fuze of the "Billant" system was used, which had a preloaded firing pin with a bow safety. The F1 was feared for its powerful fragmentation effect (up to 200 m) and was also introduced by the Russian army shortly after the war. In 1935 it was modified and equipped with Mle. 1935 fuse.

The F1 hand grenade and variants can be seen in the following films, television series, video games, and anime used by the following actors: