Before you do any editing please take the time to read the Rules, Standards and Principles. This is a very important document that explains how this website is setup as well as telling you what is and isn't allowed. If it is determined by an admin that you have not read these rules, your account will be suspended. Continued non-compliance may result in a permanent ban.

Finally, IMFDB has a forum set up here that is only available to registered members. There is lots of good stuff to see there. Please register yourself an account using the same username you used to register here.

Your screenshots for Batman (1989) appear to be from a DVD source. My screenshots are from a Blu-ray source. Also, the particular screenshot of the Cutts compensator may be look a little more blurry because the particular frame that shows the muzzle flash was in the middle of a focus change. Users are allowed to overwrite previous screenshots if they are from a higher quality source. While using the print screen option is a simple alternative, using the media player VLC and its screengrab function is the best option I have found. Also, the proper term is muzzle flash, (and not sparks) emitting from the barrel of a firearm. Please be aware of the warning at the bottom of the page regarding edits that states: Please note that all contributions to Internet Movie Firearms Database - Guns in Movies, TV and Video Games may be edited, altered, or removed by other contributors. If you do not want your writing to be edited mercilessly, then do not submit it here. Please also sign your posts with --~~~~ --Ben41 (talk) 19:38, 25 September 2012 (EDT)

Do you plan on adding any more screenshots to Batman or Batman Returns? I ask this because it appears that your screencaps appear to be from a source that doesn't match the other screenshots on the page. Also, if you are adding additional screenshots to a section that contains numerous ones already, please make sure that you have a legitimate reason to do so, such as if there's a distinctive characteristic about the firearm not already seen (you should explain this in the caption). A lot of your added screenshots are wide angles where the weapon is very tiny in the frame and there may be subject to exclusion. If you do not want your screenshots replaced or deleted, please consider using a higher quality source and using VLC player. --Ben41 (talk) 21:56, 27 September 2012 (EDT)

No more screenshots with Printscreen

Please do NOT upload any more screenshots using Printscreen as your images are coming out very blurry and do not match the quality of any of the other screenshots on the page. Please find another way to capture screenshots or else your screenshots will be deleted. If you choose not to heed this request, you may be subject to harsher disciplinary action such as banning of privileges. --Ben41 (talk) 01:59, 17 October 2012 (EDT)

SMG magazines placed behind the trigger.

Excuse me Ben41, but a day ago while I was playing GunApp and Gun Club 2 for Ipod/Iphone/Ipad, I came across this very strange SMG called the TAR-21. What makes it strange is that the magazine is placed BEHIND the trigger instead of in front like most SMGs E.G H&K MP5 and M4A1 Carbine. Whats the purpose of the magazine sometimes being placed behind the trigger instead of in front of it? Is it because it makes it look more cool like the Thompson SMG? Or is it for a different reason? If U know, alert me ASAP. Thanks! Gunnerboy--17:30

This rifle configuration is known as a "Bullpup" configuration and common in such rifles as the Steyr AUG and the L85A1. You can look up "bullpup" on wikipedia to see its advantages. Also, you can sign your posts by clicking the "pencil" button right above. --Ben41 (talk) 22:49, 4 October 2012 (EDT)

Y is it that most of the time police use machine guns during dangerous criminal situations but they VERY RARELY carry grenade launchers (at least for my knowledge)? E.G During a riot in Vancouver, I noticed police used GL-06 grenade launchers to shoot smoke bombs at the crowd to make arrests easier. But in most crime scenes like in the movie T3: ROTM, police carry machine guns to shoot the T-850 and smoke bombs (to smoke out Katie and get her to safety) but no grenade launchers. It isn't adding up/making any sense for me whatsoever. And also, Y is it that police/SWAT don't use heavy weapons? Such as miniguns, bazookas, missile launchers, tanks, and turret mounted vehicles like police cars and SUVs etc.? I know they carry machine guns and grenade launchers, but it still dosent add things up/make any sense whatsoever. Any advice?--Gunnerboy 11:01 October 6 2012 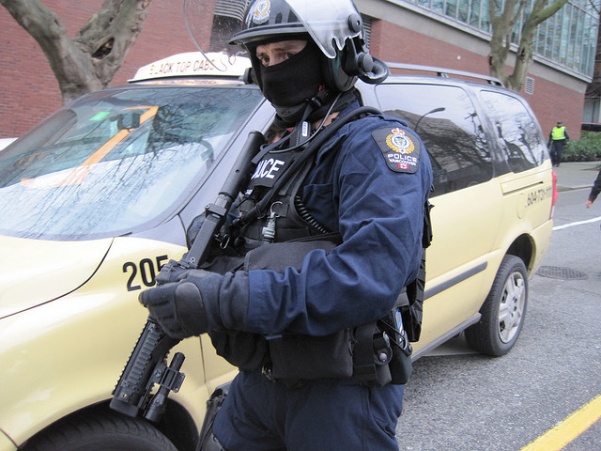 A riot policeman guarding the streets of Vancouver with what appears to be a GL-06 grenade launcher. 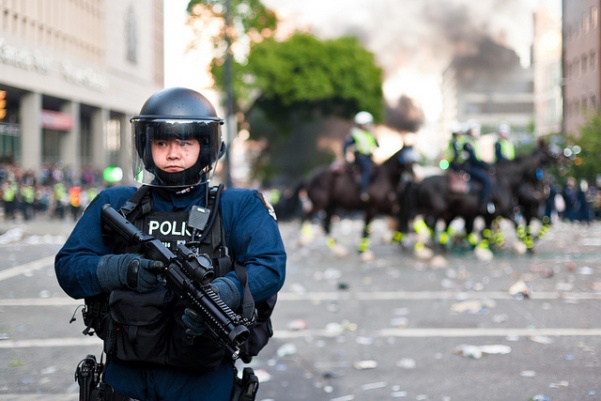 Another riot policeman with what appears to be a GL-06 grenade launcher. (Please help me figure out what kind of launchers these are. It comes down to either a GL-06 or an EXD-37).

You're more than welcome to contribute, but make sure they are good quality contributions. The reason is that in reality most law enforcement agencies are interested in preserving lives and the people they typically need to deploy their weapons on are citizens, and not enemy combatants. Heavy weapons tend to have too much potential for collateral damage as well. Also, you're not texting here, so I would recommend that you try and use a more conversational writing style. --Ben41 (talk) 20:16, 18 October 2012 (EDT)

Try to find a program that allows you to capture a shot of the entire computer screen (not Printscreen). Then playback your DVD on the computer and take the screenshot of the entire screen. You can MS Paint, MS Picture Manager or Photoshop to crop off everything except the shot of the video. If you want to add the screenshot, first add to the discussion page of the film and then it will be decided if it will added. --Ben41 (talk) 01:24, 18 October 2012 (EDT)

You save what, one second, typing out two extra letters on a keyboard? And I don't know if you're aware, but most people have a rather low opinion on youtube commentators and comparing yourself to them might be the worst defense ever. As you get older, people will judge you based on the way you communicate, so don't make it easy for them. --Funkychinaman (talk) 20:57, 18 October 2012 (EDT)

Batman Returns behind the scenes reply

Creating multiple accounts is exactly what sockpuppetting is. If you're lucky, we'd at least warn you about it first before banning you. As for quotes, there's no hard and fast rule regarding them, but they should at least be famous and relevant. You can't really compare "hasta la vista, baby," arguably the most famous quote in the film, with some random quote by an unnamed character. As for everything else, all I suggest is sit back and watch how things are done. Don't bite off more than you can chew and be accountable, I don't know what else to say. I suppose the fact that you recognize that there is a problem is a step in the right direction. --Funkychinaman (talk) 02:56, 21 August 2013 (EDT)

I agree with what FCM said. I would recommend that you observe how pages that the admins or some of the other regular users are made. If you're going to contribute to some of the major pages like the Terminator pages or Transformers, you'll know that these are more frequently watched and will be corrected if needed. Quotes can be subject to removal if they could be deemed to be offensive or just not relevant enough (just adding "Fire!" doesn't really say much). I definitely would recommend you go over the Rules, Standards and Principles page again. Also, if you're somewhat new to the site and you want to contribute, it's best to drop a "short and to the point" message that informs someone of what you want to do. You'll definitely cause a little more headaches if you start make a lot of edits that you didn't first tell an admin about. --Ben41 (talk) 16:43, 21 August 2013 (EDT)

Ben41 and Funkychinaman nailed the issue on the head. Like it or not we try to be a little more adult here. I/m a moderator as well and I don't have any issue with the occasional humorous caption but it needs to relate to the screencap in question. Not just some cutesy smart-ass remark. We strive to rise above the middle school mentality here. Hope this helps. --Jcordell (talk) 12:44, 24 August 2013 (EDT)

Modern Warfare 2 had a habit of referring to M134s as "Vulcan" mini guns as well, you can't really just go off of that name. You could mention that the drum magazine is similar to that used on some of the M61 variants, but the weapon in game is quite clearly supposed to be a hand-held M134. Also, according to the Payday wiki, it's name in the files is "m134".--AgentGumby (talk) 20:01, 2 February 2018 (EST)

I didn't even recognize that little thing thing as a drum mag at first. That can hold what, three seconds worth of ammo? Drum mags are hardly unique to the M61, and something that size and shape is more like what was on the MG42.

The M134 itself was called the "mini-vulcan" when it was under development (that's what "minigun" is a semi-shorthand for) and a I recall as a kid I thought that "vulcan" was a generic term for rotary guns, so that doesn't really prove anything.
Now the image you put up might look a little similar (that's the M61A1 mounting from the F/A-18 Hornet) but look from a different angle: 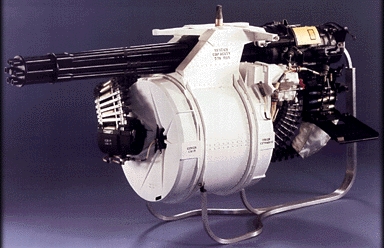 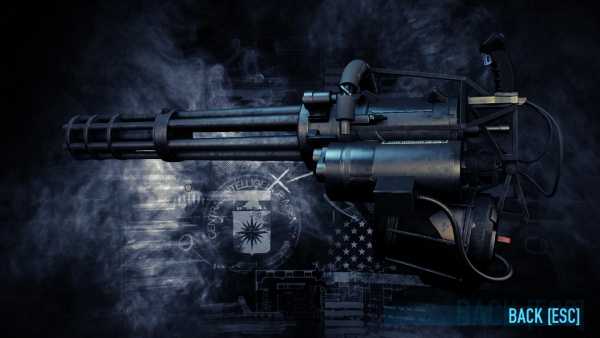