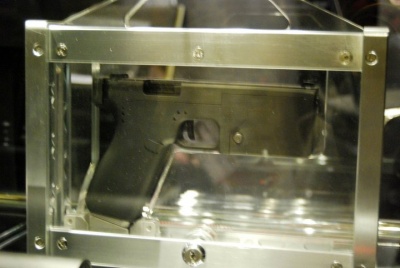 The official name is "KRISS KARD". TDI is the name of the company, and not weapons.

And Kriss (or rather Kriss Super V) is the name of the action, not the weapon. The pistol is just called the "Kard," TDI slaps "KRISS" in front of literally everything they manufacture because they're run by 13-year-old morons. They're now calling themselves KRISS USA (feel the allcaps), so "KRISS" in this thing's name is just the manfacturer name, which we're discarding since we're calling them TDI. Though they were slapping KRISS in front of the names of everything on their site before that, including things like the KRISS sling and KRISS tactical pack which weren't even guns.

To give you some idea of the kind of people we're talking about here, their official name for the gun sane people call the Vector was "TDI KRISS Super V Vector XSMG." They are the ultimate mall ninja gun company. Evil Tim 06:02, 5 May 2012 (CDT)

i have looked at the system of the super v it is mechanicaly sound and recoil stablising i look for good engineers i leave the naming to the pr chumps --Seekerdude 07:27, 5 May 2012 (CDT)

I'd be the first to agree that it's a better image, but it also has a watermark specifically stating it's copyrighted. If someone wants to ask the guy's permission to use it here that's fine and good, but we can hardly complain about people nicking MPM's images if we transparently do the same thing to other people's. Evil Tim 02:53, 6 May 2012 (CDT)

Doesn't it look like a GLOCK? Seriously, is it only obvious to me?

The squarer profile of the upper portion of the weapon is somewhat reminiscent, but I never would have made that connection unless you brought it up. ---ChrisJ- CONTRIBUTIONS 05:07, 2 October 2012 (EDT)

So i agree with you guys, they're morons in the company. But I will admit that they did make one hell of a system.

Eh, system that was very similar was invented for a target pistol over a century ago, and it never caught on (though in that case it was placed in such a way that it increased muzzle jump). It's a classic case of creating a problem in order to solve it. If they'd made the Vector back in the subgun renaissance of the 80s they might have shifted some units, but I don't think they're ever going to see any serious military or LE sales now that everyone's using carbines or lighter AP "PDW" cartridges. The Kard is just pointless: a .45 semi just doesn't have the kind of recoil problems that would justify all the additional complexity to offset them, and good luck finding a military or LE buyer for a machine pistol without the use of a time machine. Evil Tim (talk) 08:53, 4 January 2017 (EST)

Their best bet at this point would be to try and ship it as some sort of handgun for competitive target shooting, as that's one place where any amount of recoil makes a difference, but even that I'm not sure on. Now, their ideas on creating other sorts of weapons with this mechanism (assault rifles, battle rifles, shotguns, I've even heard a bit of hearsay about an anti-material rifle), those could go somewhere. However, it seems like those ideas aren't going anywhere; these guys are too dead-set on making the submachine gun successful, regardless of whether or not anybody else agrees with them. Pyr0m4n14c (talk) 18:53, 4 January 2017 (EST)

The ones I heard of were the MVS which was a shotgun they gave up on talking about sometime in 2009, and a .50 machine gun with a twin horizontal version of their mechanism they were calling the "Disraptor" (!1) which vanished from their website when they changed from TDI to ALLCAPS ARMS. They strike me as being like Metal Storm, all impressive-sounding projects that never go anywhere. Evil Tim (talk) 03:23, 5 January 2017 (EST)