Should the alien weapons be put into this article? I know they aren't real, but they are still weapons from the game

Why not? Why not the Gluon gun or the Tau as well?

Isn't it a Bizon not an MP5 with the MP5 being added via mods?

You have that the wrong way round.

dose the crossbow count as a weapon on this sight?

I'm pretty sure the mp 5 in th egame is the silenced variant, it sure looks like it.

it is an mp5. if you look at it while its on the ground you can see its an mp5

This is a very well-known continuity error. The Player (p_view) model is an MP5SD3, but the World (w_view) model that lies on the ground is an MP5A3. On the other hand, the weapon certainly does not sound like an MP5SD3. -MT2008

The thing that looks like a silencer is a compensator used to protect the grenade launcher. ---Drake2

Yeah, just like the one from "End of Days"

No, it's not. Look at the model some time using the Half-Life Model Viewer or any other such program. The p_view MP5 model clearly has an MP5SD hand guard and suppressor, not a ported compensator and G3-style hand guard like the End of Days MP5. Not to mention that Half-Life was released almost a year before End of Days, so I doubt the Half-Life artists used that gun as their reference point. -MT2008

For me the RPG looks kinda wierd too,but Combine OverWiki(half life wikia) says that it resembles an Armbrust.Is this true?

i think it does. i checked with combine overwiki (i am a member) and it does say that, when i googled it,it doeslook just like it. its called the HECU RPG, but RPG is rocket proppelled greneade and this isnt its more like laser guided rocket launcher smish34

Can anyone please help with these guns? 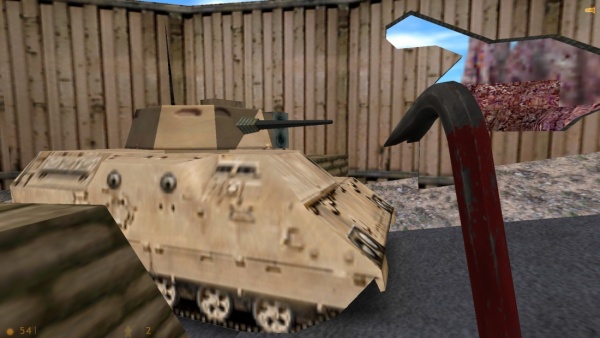 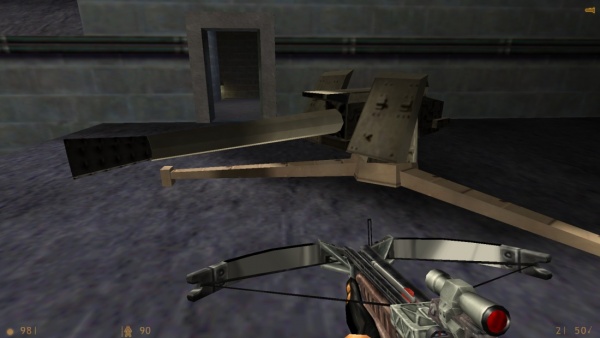 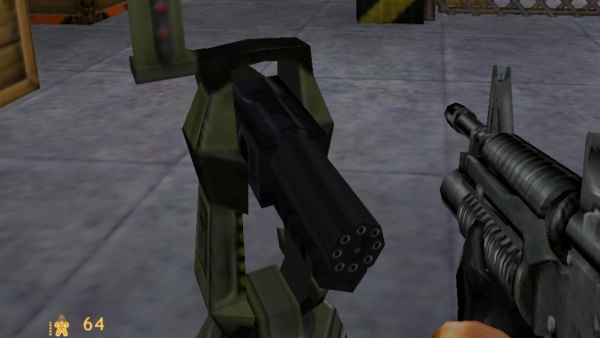 1 is supposed to be a Bradley, so it's an M242 Bushmaster chaingun. 2 doesn't really have enough detail to ID; it looks more like they based it on a WW2 anti-tank gun than a modern artillery piece, though. 3 would just be "fictional gatling gun." Evil Tim 14:39, 16 October 2011 (CDT)

Also, get a picture of the Abrams, it's worth commenting that the hull machine gun it has is totally wrong since I can't off-hand think of any MBT that's ever had a hull MG; it compromises the glacis plate. Evil Tim 14:46, 16 October 2011 (CDT)

Ok, will get an image. But first tell me which tank is the Abrams. There is a yellow tank or the green tank. The green tank has a Browning on its top, the yellow one has no MG on it. (so I'm thinking it is the green one) - bozitojugg3rn4ut 15:25, 16 October 2011 (CDT)

There is a tank with desert finish when climbing up from the sewers I think. I didnt cap it because there was no gun on it. 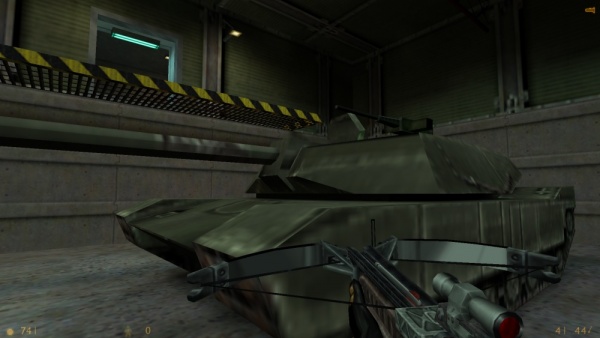 You can, yes. The tank with the hull gun is in an open area with trenches you can use to sneak around it, I think it's just after that Bradley you've got in the picture. Evil Tim 16:28, 16 October 2011 (CDT) 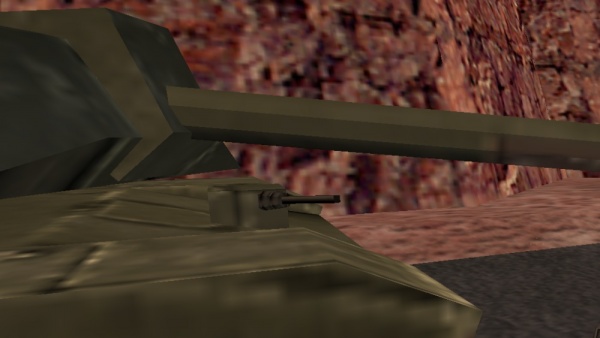 This is what you meant, right? This is from the original game. In the HD version there is a small window and the Browning is sticking out from there so it is a little bit more acceptable. 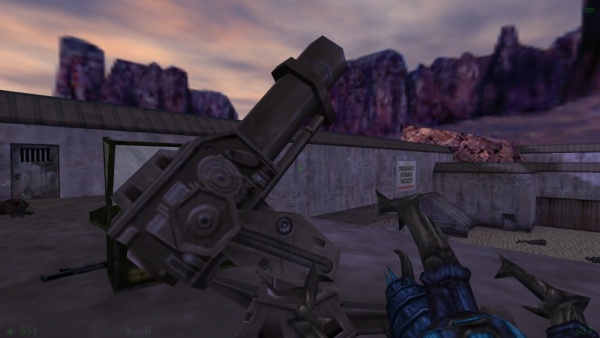 Fictional again (if it were anything real it would be a >12 inch siege mortar), and that stupid little mount would probably just make it flip over backwards if you tried to fire it in real life. Evil Tim 09:35, 17 October 2011 (CDT)

Now this is an impressive necropost even for me, but I thought of something. I've played through the game multiple times, and I'm pretty sure that I would remember a giant mortar firing. This, coupled with its location in a scientific research facility (and, given how it seems to be around night-time in that screenshot, the astronomical-oriented section in particular (the area where you launch the rocket from)), makes me wonder something: how do we know that it isn't a telescope? If nothing else, I don't really think that a group of Marines could get that large a mortar on top of a roof in such a short span of time, after including all the time spent securing the area and all, especially considering that the door next to it in this screenshot is too small for it, so it would have to be taken up in pieces and assembled there. So, do you think that this is a logical idea? Or have I forgotten something, and so now I've just been rambling on like an idiot? Pyr0m4n14c (talk) 09:43, 10 August 2017 (EDT)

A telescope.. an interesting argument but I don't think it works. For one I think I remember this piece actually firing, myself. Or, at the very least I most certainly recall having to run a lot to avoid getting otherwise inexplicably blown up in the part of the level where this appears and with nothing else to explain said explosions, well.. there ya go. I'll add by pointing out it does have a large ammo box next to it (which a telescope certainly doesn't need) and I don't see an ordinance depot as the typical place to conduct stargazing. I agree with the ridiculousness of it being up there, just as I also agree with Tim's point about the ridiculousness of it actually being used. Hey it is a video game, and one approaching 20 years out at that. StanTheMan (talk) 02:16, 11 August 2017 (EDT)

Wait a second... is this in one of the expansions? Like, Opposing Force or Blue Shift? 'Cause, if so, then that would pretty much invalidate my main point. Well, at least I have the fact that I now know how to upload screenshots to comfort me. See ya in my next edit spree (New Vegas), now with someone screenshots. Pyr0m4n14c (talk) 09:04, 11 August 2017 (EDT) P.S.: Do we have an ID on the Blue Shift cover art pistol? It looks kinda odd.

I'm pretty sure that's from OP4, 'cause I remember that section was a pain. And also, I was replaying HL and during the section "On a Rail" these launchers were being fired at me (rockets). Is this based on a real launcher system? -SeptemberJack (talk) 11:47, 11 August 2017 (EDT) 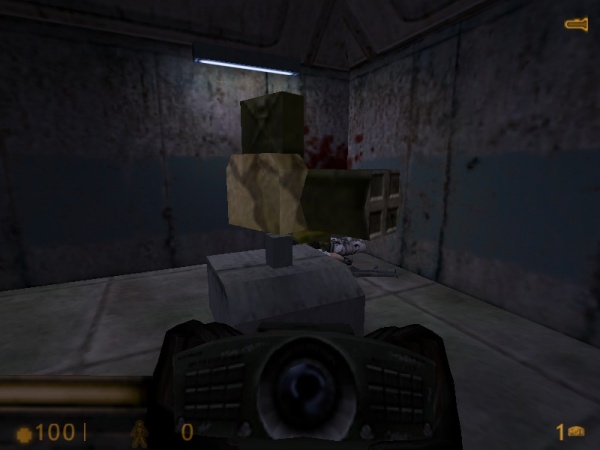 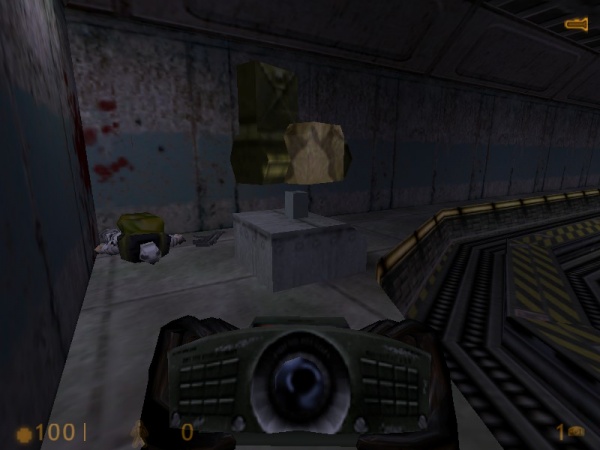 Those are on the main page; they're loosely based on the M202 FLASH, with a slightly different body shape, square holes, and a magazine feeding system. Also, would you kindly try and get close to one of those without killing the enemy next to them? They won't actually attack, so you can get a great shot of the low-detail NPC M727, which is different from the dropped/in-world model. Also, any ideas on the pistol on the Blue Shift cover art? Thanks! Pyr0m4n14c (talk) 12:28, 11 August 2017 (EDT)

The pistol, idk (looks like a amalgam of pistols, imo, just like the Half-Life shotgun). Here's the model you wanted, 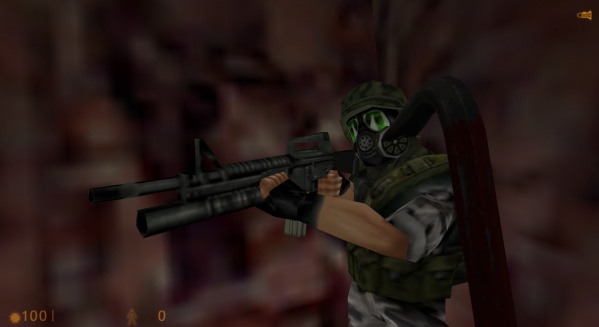 A HECU Grunt holds his M727 in the cliffs of "Surface Tension".

and I found the mortar! It's in the level "The Package" of Opposing Force. 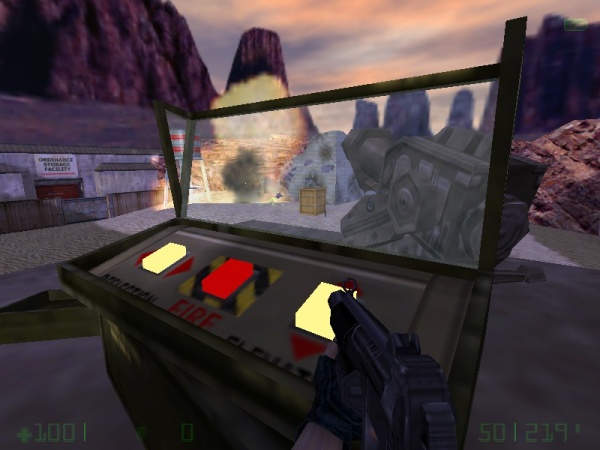 The mortar used in the level "The Package".

I do think you should leave one non-HD screenshot at the top of each section, just to illustrate the difference better. That's what I'm planning to do when MGS HD Collection comes out. Evil Tim 07:32, 18 October 2011 (CDT)

Changed the order of some of the images. now most weapons have pics of both versions, Maybe I will get the rest when I have the time but to be honest playing the old version hurts. Really. Oh, and the combine wiki claims that the artillery is a M198 Howitzer. What do you think? - bozitojugg3rn4ut 08:06, 18 October 2011 (CDT)

Yeah, game-specific Wikis can have some fairly "interesting" ideas about weapon IDs added. If someone held a gun to my head and said I had to ID it as something, I'd say it was a deployed PaK 44 with the wheels missing, but it looks nothing like any modern field gun. And looking at the mortar again, I think they based it on a telescope. Evil Tim 11:01, 18 October 2011 (CDT)

I've been looking at the handgrenade in the original game and it looks more like a Mills Bomb rather than a MkII. What do you think? 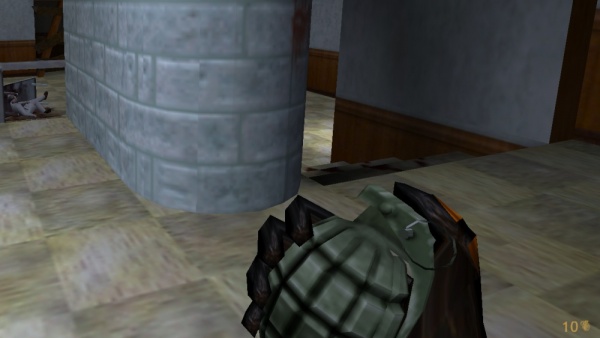 Original version of the Mk 2 grenade.

Could say that the the scoring patterns on the body looks nothing like a Mk2. Perhaps a hybrid?

Specifications section above the 92FS section. There is a factory 17-rounder, but from the pictures I just looked at it has a deeper base than the one on the model in the game. Evil Tim 02:31, 12 August 2012 (CDT)

Fun fact: I just saw mentions of the ISTEC ISL-200, an underslug grenade launcher made in the 2000s that can apparently be attached to the MP5 and even to the MP7 (those submachine guns being in HL1 and HL2, respectively). Not sure what sources we can trust and whatnot :P (which is why I'm not putting a particular link, so feel free to google it) --Ultimate94ninja (talk) 12:10, 19 January 2018 (EST) 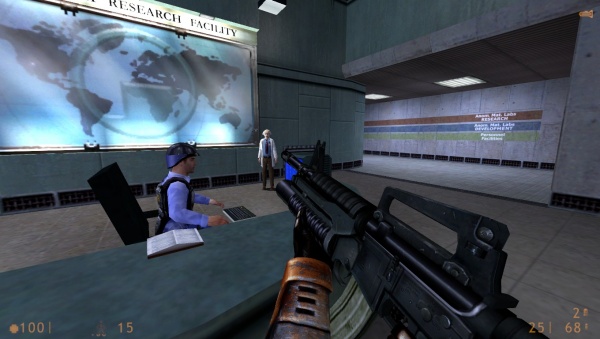 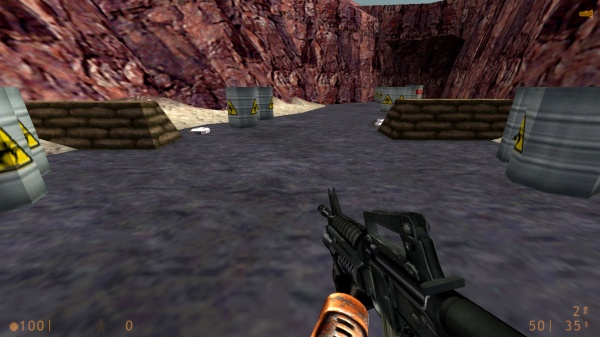 The weapon in Half-Life: Source's HD pack could look like an M4A1 at first glance, but looking at it closely the carrying handle seems to be a fixed one. Thus, I suppose we should keep it IDed as a Model 727, just with added knobs on the carry handle like an M4 (but on the opposite side). Opinions? --Ultimate94ninja (talk) 16:23, 30 July 2019 (EDT)

I suppose those are supposed to be the knobs as part of the removable carry handle (which would make it a legit (Model 921) M4A1), but that's a fairly crude representation if so. But between that and the fact there's no showing of even a simple line to indicate the slight gap between the rail notches and the carry handle (nevermind the actual break/gap of the notches and the carry handle in proper detail), and no receiver markings to the contrary - Eh, I don't see any big need to change it. StanTheMan (talk) 22:19, 30 July 2019 (EDT)

Yeah, in fact HL source initially lacked an HD pack, and a fan-made one was released (with some improvements compared to the HD pack of the original Half-Life and its expansions, notably the HEV suit's scratches, the textures of some weapons, the HECU's uniforms, etc.), but this improved pack later made it to the official HL Source following a 2013 update. --Ultimate94ninja (talk) 12:10, 31 July 2019 (EDT)