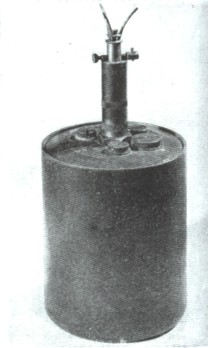 S-Mine 35. Note the fuze is in the centre of the mine body; the later S-Mine 44's fuze was instead offset. 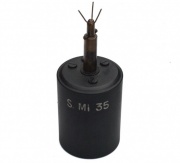 The Schrapnellmine is perhaps the most well-known bounding antipersonnel mine. Developed in the 1930s by Nazi Germany, the mine consists of an outer casing surrounding the mine body, with a propellant charge underneath. When triggered, either by applying pressure to the prongs, operating a tripwire rigged to them, or by any other type of fuze that might be substituted, the propellant charge is set off, throwing the body 3-5 feet vertically whereupon the main charge detonates, creating a horizontal spread of shrapnel with a lethal radius of around 22 yards and a casualty radius of around 150 yards. This earned the mine the nickname Bouncing Betty among American troops, though this nickname has since often been applied to any bounding antipersonnel mine, not just the S-Mine. Jumping Jack was also used by Australian and New Zealand soldiers, while the French called it "The Silent Soldier".

S-Mine dischargers were also mounted in brackets on the hulls of early production Wehrmacht armoured vehicles, used for close-range anti-infantry defence; early versions of the Tiger I had five such devices. These were essentially small mortars that fired the mine's bounding body as a projectile.

The S-Mine appears in the following: 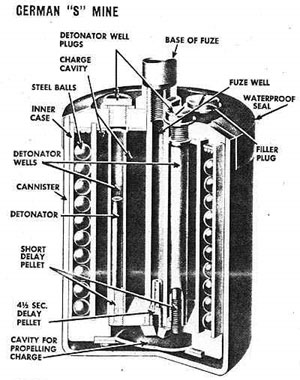 Diagram of the body of an S-Mine. 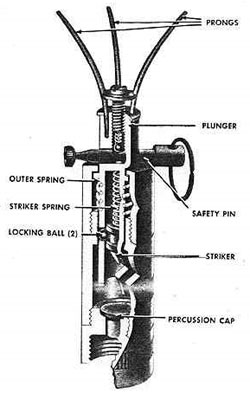 Diagram of the sensor of an S-Mine.
Retrieved from "http://www.imfdb.org/index.php?title=S-Mine&oldid=1483201"
Categories: