Tremors 3: Back to Perfection 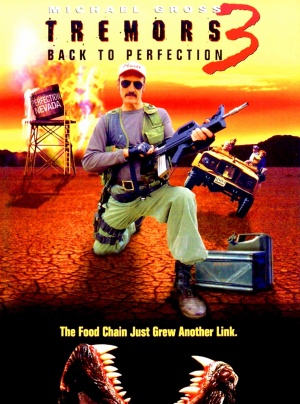 The following weapons were used in the film Tremors 3: Back to Perfection:

Burt Gummer (Michael Gross) is armed with a Ruger Mini-14 equipped with flash-hider and fitted in the proprietary Ruger Muzzelite MZ14 Bullpup stock. He carries it throughout the film, using it to fire at an attacking Ass Blaster on one occasion. The Muzzelite Mini-14 is also seen on the film's poster and home video art. 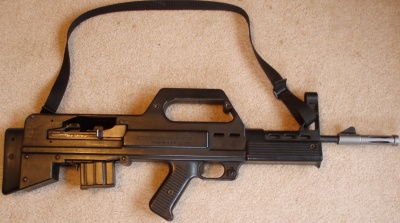 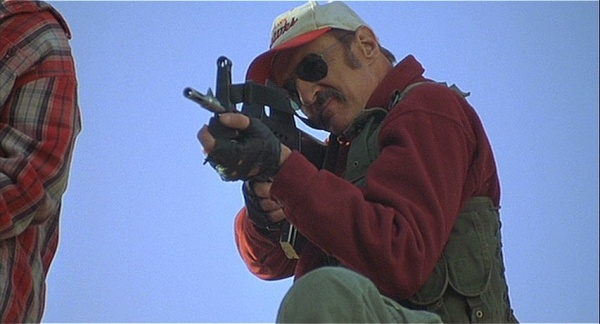 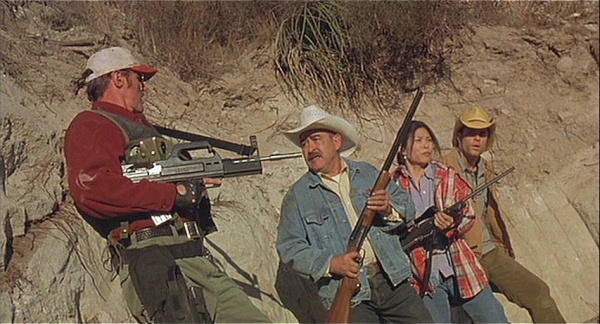 Burt and the others take cover.

Burt (Michael Gross) arms himself with this single-shot LAR Grizzly Big Boar .50 BMG rifle when investigating the Graboid outside his compound. 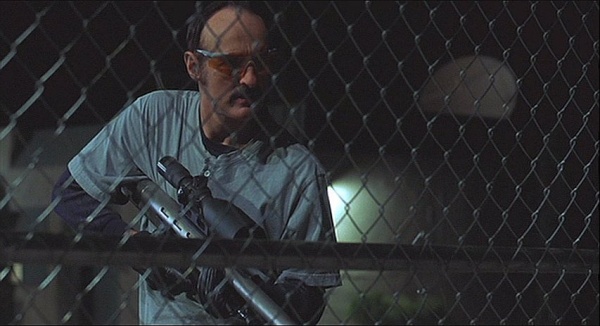 Burt (Michael Gross) hands a .308 chambered Ruger M77 bolt-action rifle with scope off to Jodi (Susan Chuang) when the group heads to the canyon to clean up the Shriekers, she ends up using it to fire at the first AssBlaster they encounter. The front sling swivel, relieved areas of the buttstock and the scope rings indicate it is a Ruger. This M77 also has the now discontinued "boat paddle" stock. 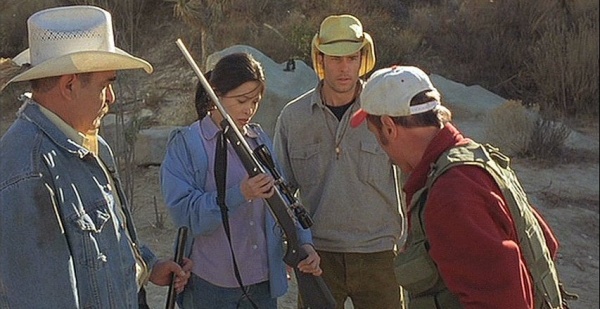 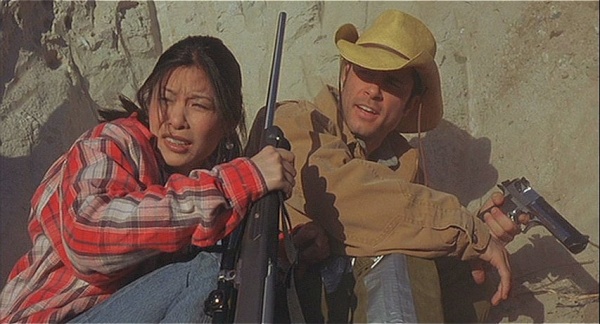 A Colt AR-15 SP1 fitted with A2 handguards can be seen when Burt (Michael Gross) takes target practice in his indoor basement shooting range shortly before the albino Graboid shows up outside. 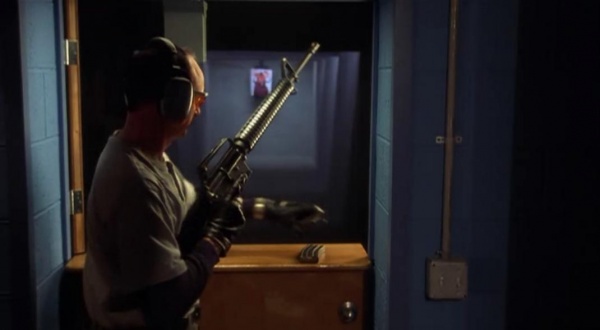 Burt (Michael Gross) finishes firing a few rounds in his indoor range with his SP1 with A2 handguards. Note lack of forward assist on the rifle.

This .357 Magnum chambered two-tone finished Desert Eagle Mark I is carried in a thigh holster by Burt (Michael Gross) throughout the movie, Burt pulls it once when the albino Graboid's tentacle gets close to his foot on the rock. Burt also hands it off to Jack (Shawn Christian) when the group go to eliminate the Shriekers in the box canyon, Jack ends up using it to fire on the first AssBlaster creature they encounter. 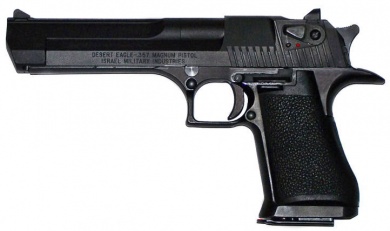 Jack (Shawn Christian) holds the Desert Eagle Mark I as he and Jodi take cover from Burt's bomb.

Burt (Michael Gross) uses two of these .50 caliber Browning M2HB machine guns in an M45 quadmount system to eliminate around 300 Shriekers in the film's opening. 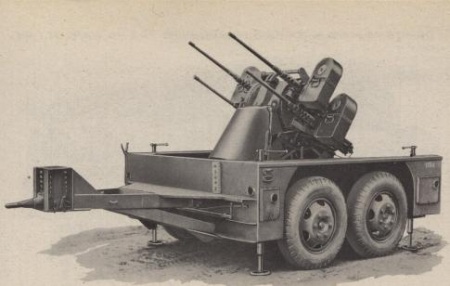 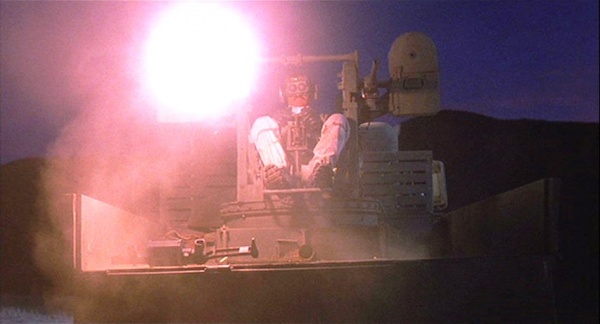 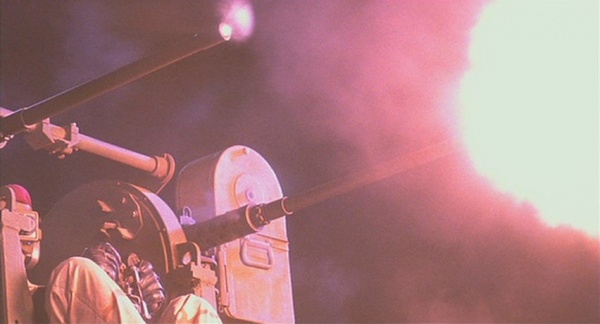 Another shot of Burt firing the twin .50's on the oncoming Shriekers

A 12 Gauge Double Barreled Shotgun can be seen in the hands of Miguel (Tony Genaro) in the scene where they go to kill the Shriekers in the box canyon and when they first encounter an AssBlaster in which he doesn't get a chance to get a shot off. 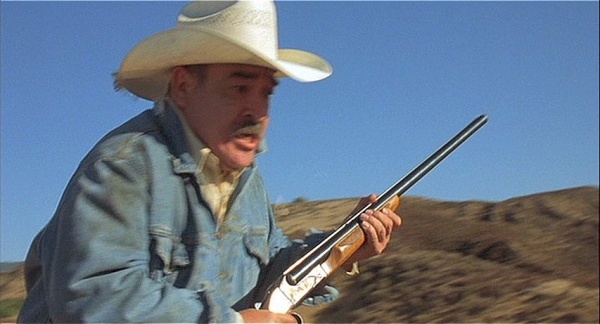 A multi-shot DefTech 37mm launcher (similar to the ones featured in RoboCop 3 and CliffHanger) can be seen in the hands of Burt near the films opening in which he fires a flare out of to illuminate a proper killing zone for the approaching Shrieker herd. This is one of the very rare instances where the launcher is actually seen firing its proper/correct flare munitions, rather than explosive rounds as it is often portrayed. 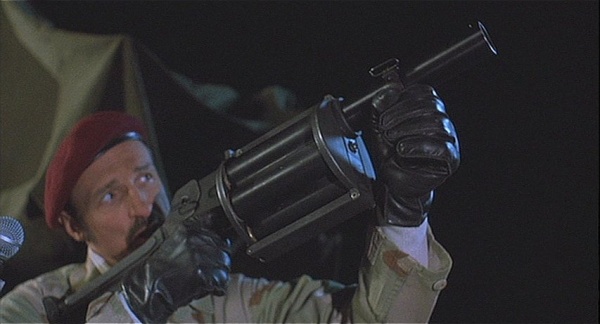 Burt fires a flare into the air in Argentina from the DefTech 37mm launcher. 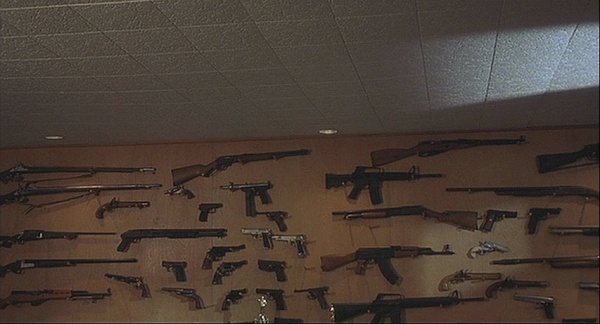 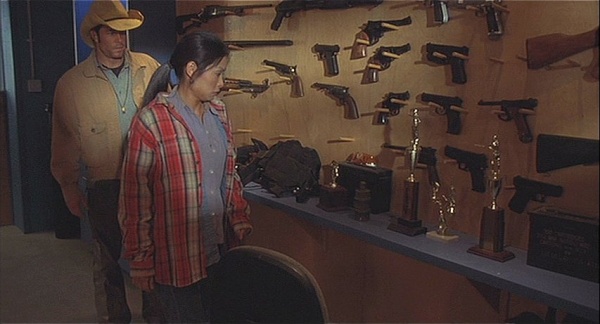 Pictured: SKS rifle (left peaking out by Jodi's head), Colt 1851 Navy above first trophy in front of Jodi, Heckler & Koch P7M8 directly above previous, Smith & Wesson Model 29 right of previous with Smith & Wesson Model 19 directly below Model 29, Mossberg 500 Cruiser above previous Smith 29 & 19, Glock 17 muzzle pointed right across from Model 19 Smith, CZ 75B directly below previous Glock, with Mauser C96 below & Nambu Type 14 Pistol to the right with a Glock 30 below it. 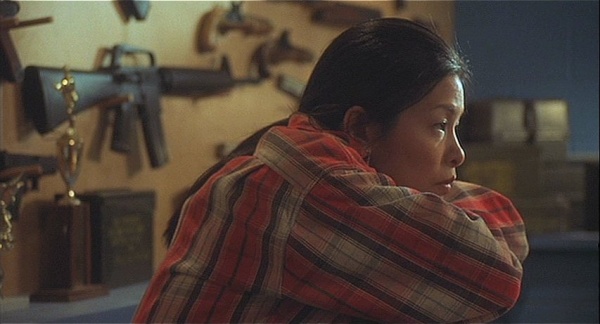 An AR-15 Sporter II is seen on the wall behind Jodi.