Treasure of Silver Lake (German title: Der Schatz im Silbersee) is a 1962 German Western film directed by Harald Reinl and based on the novel by Karl May. Starring Lex Barker as Old Shatterhand, Pierre Brice as Winnetou, chief of the Mescalero Apache tribe, and Herbert Lom as Colonel Brinkley.

The following weapons were used in the film Treasure of Silver Lake:

Fred Engel (Götz George) uses a Bodeo M1889 during the shootout with the bandits. 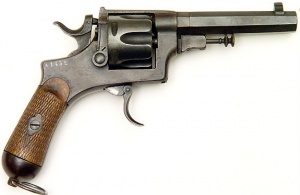 Several characters use Smith & Wesson Victory Model revolvers. The appearance of this revolver in a film taking place in the 1800s is extremely anachronistic due to the fact the Victory Model was only made during World War II.

One of the bandits (left) holds his revolver in hand, note the lanyard ring and plain wood grips.

Hilton (Ilija Ivezic) appears to be armed with a Röhm RG34 revolver. Its appearance is also anachronistic, although it may be standing in for the somewhat similar looking Colt Single Action Army.

One of Hilton's bandits with his double-barrel.

Old Shatterhand (Lex Barker) is armed with one of his signature weapons, a "Henry 25-shot Carbine" (Henrystutzen, as it is called in the original novels), made by Mr. Henry, a fictional gunsmith from St. Louis. The screen gun is a custom prop, made specially for the movies, apparently built around a Gasser M1870.

Old Shatterhand's "Henry 25-shot Carbine", as it appears on screen.

Old Shatterhand (Lex Barker) fires his custom-made "Henry" with a 25-round magazine.

Bandit on horseback carries a rifle.

Mr. Patterson (Sima Janicijevic) out on night patrol with his gun at the ready. 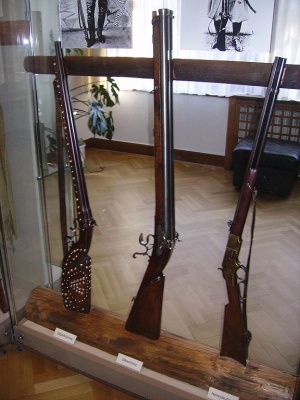 From left to right: Winnetou's "The Silver Gun", Old Shatterhand's "The Bear Killer", and "Henry's 25-shot" in the Karl May Museum.

Old Shatterhand knocks bandits off their horses with the "Bear Killer".

From left to right: Winnetou's "The Silver Gun", Old Shatterhand's "The Bear Killer", and "Henry's 25-shot" in the Karl May Museum. 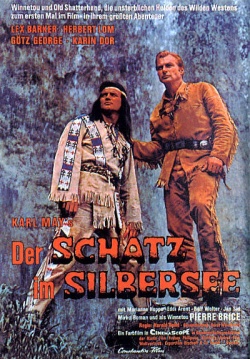