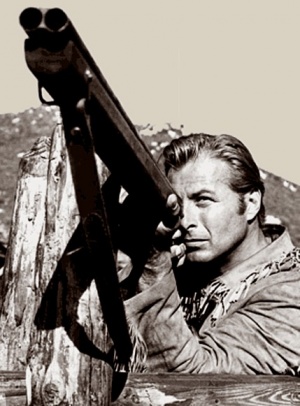 Lex Barker born as Alexander Crichlow Barker on 8th May 1919 in Rye, New York. He began worked as a lighting technician, stagehand and assistant director. The breakthrough in his professional life came with the role of Tarzan: after Johnny Weissmuller Barker became his the tenth film Tarzan. By 1952 he managed to get a divorce from Arlene Dahl and live with one of Hollywood's biggest stars Lana Turner. Although Tarzan brought him fame, Barker gave up the role because he longed for more challenging roles and wanted not to be associated with one character. In 1962 a German producer Horst Wendlandt offered him the role Old Shatterhand in the film Treasure of Silver Lake and Barker's fate was decided once and for all: he had made him a star. At that time he was on top of the German box office due to a trilogy about Winnetou: Apache Gold (1963), Last of the Renegades (1964) and The Desperado Trail (1965). Barker went from movie to movie. In 1966 at the Bambi awards in Germany he was elected as the most popular foreign actor. His last western as Old Shatterhand was filmed in 1968. The film´s offers gradually waned, causing his return to the U.S., where he appeared the popular television series The FBI and It Takes a Thief. Lex Barker died 11 May 1973 at Lexington Avenue New York of a heart attack.