The Batman is the 2022 "reboot" of the Batman feature film franchise. Directed by Matt Reeves, the film follows the Caped Crusader during his second year of fighting crime in Gotham City as he pursues the Riddler, a serial killer targeting Gotham's elite. The film stars Robert Pattinson as Bruce Wayne / Batman and co-stars Paul Dano aa Edward Nashton / The Riddler, Zoë Kravitz as Selina Kyle / Catwoman, and Colin Farrell as Oswald Cobblepot / The Penguin. After several delays, the film was released theatrically on March 4, 2022.

The following weapons were used in the film The Batman:

"Hey! Put down the bat or I'll blow your head off!"
Corrupt detective William Kenzie (Peter McDonald) holds Batman at gunpoint with his Glock 17 when he forces his way into the Iceberg Lounge to find Oswald Cobblepot / The Penguin (Colin Farrell).

Kenzie fires his Glock 17 at Batman when he moves to throw the bat he's holding at Kenzie.

GCPD officers aim their Glock 17s at district attorney Gil Coulson (Peter Sarsgaard), who has had a bomb strapped to his neck by the Riddler.

Lieutenant James Gordon (Jeffrey Wright) uses what appears to be a Smith & Wesson M&P9 pistol as his sidearm.

James Gordon (Jeffrey Wright) holds what appears to be a Smith & Wesson M&P9 pistol after a vehicle crashes a memorial service.

The "Emoji Drophead" (Tony Christian) is seen using a Smith & Wesson Model 10 revolver when he sticks up the Good Times Grocery convenience store.

Smith & Wesson Model 10 HB (heavy barrel) revolver (post-1950s model) - .38 Special. Later incarnations of the Model 10 had a non-tapered heavy barrel, which leads it to be commonly mistaken for a .357 revolver.

The "Emoji Drophead" (Tony Christian) draws his Smith & Wesson Model 10 on the cashier at Good Times Grocery. The outfit he is wearing is possibly a reference to the one worn by Robert Pattinson in Good Time, along with the name of the convenience store. Pattinson's performance in Good Time was reportedly a large reason why director Matt Reeves chose to play Bruce Wayne / Batman in The Batman.

A close-up profile shot of the Model 10 as it is pointed at the cashier.

The "Emoji Drophead" gets up after he is hit by a taxi, having been distracted by a dark alley that he feared Batman was lurking in.

In a video by the Riddler revealing the dark history of the Wayne and Arkham families, one of the Arkhams (Martha Wayne's mother) is shown to have committed suicide with a nickel Smith & Wesson Model 19 Snub Nose after murdering her husband. 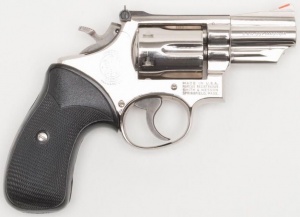 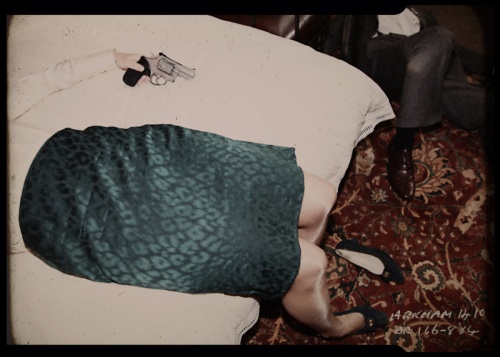 A crime scene photo of the suicide of Martha Wayne's mother showing the Smith & Wesson Model 19 still in her hand. This picture and the following one were released after the film on Rataalada.com, a recreation of the website used by the Riddler in the film that would host riddles with extra content from The Batman as the rewards for solving them. 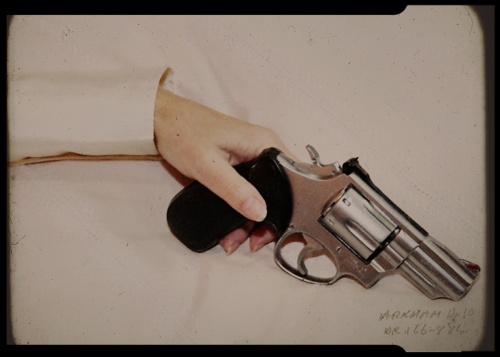 A close-up of the Smith & Wesson Model 19 in the hand of Martha's mother. Note that, while the Smith & Wesson logo seems to have been edited out, small bits of writing on the frame and barrel are just barely legible, including the "S" in "S.&W. 357 MAGNUM" on the latter.

A Heckler & Koch P30 pistol is used by one of Falcone's henchman, specifically the one who uses his phone as a flashlight.

The henchman wields his Heckler & Koch P30 as he investigates the elevator.

As he turns to check the other side of the elevator, the P30's external hammer can be just barely seen.

At the beginning of the film, a thug shoots at Batman with a snub-nosed revolver during the subway attack.

The thug fires a revolver at Batman from point blank range.

GCPD police chief Mackenzie Bock (Con O'Neill) uses a revolver as his sidearm, only drawing it when district attorney Gil Coulson (Peter Sarsgaard) drives his SUV into Don Mitchell, Jr. (Rupert Penry-Jones)'s memorial service at Gotham City Hall with a bomb strapped around his neck, as part of a plan by Edward Nashton / The Riddler (Paul Dano).

Oswald Cobblepot / The Penguin (Colin Farrell) fires a Micro Uzi at Batman when he spots him outside his drug lab and also fires it at the Batmobile in the ensuing chase scene.

The first of Riddler's followers fires a Heckler & Koch MP5A3 with a railed handguard and rail mount for sights at Batman after he crashes from the roof during the attack on Gotham Square Garden.

The follower on the left aims his Heckler & Koch MP5A3 at Batman.

One of Falcone's henchmen is seen firing a Heckler & Koch MP5K at Batman.

The henchman on the left fires his Heckler & Koch MP5K at Batman.

Gordon holds his Mossberg 590 as he takes Falcone into custody.

One of the Riddler's followers attacks Batman with a 12 Gauge Double Barreled Shotgun when Batman disrupts their attack on Gotham Square Garden.

The GC-ESU officers hold their M4A1 Carbines as they watch Batman enter the scene.

A close-up of the flash hider on one of the officers' M4A1 as it is aimed at Batman, who is dazed from the bomb having exploded right in front of him.

The Riddler's followers are seen with what appear to be Winchester Model 70 rifles during their attack on Gotham Square Garden.

One of the Riddler's followers holds what appears to be a Winchester Model 70.

The Riddler's followers react as Batman crashes through the roof.

One of the Riddler's followers carries a M16A4 rifle with a telescopic sight during the arena attack.