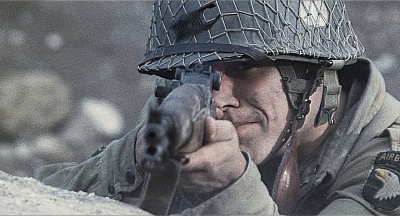 Matt Damon aims a Glock 17 as Jason Bourne in The Bourne Ultimatum (2007).

Matt Damon is an American writer/actor well known to film audiences for his role as Jason Bourne in four features in the Bourne film franchise. In addition, he received an Academy Award for Best Original Screenplay for the 1997 film Good Will Hunting, which he co-wrote with his friend and co-star Ben Affleck. He also received Academy Award nominations for his acting roles in the films The Martian and Invictus and has appeared in such films as Saving Private Ryan, Courage Under Fire, Green Zone, True Grit (2010) as well as all three films in the Ocean's Eleven feature film trilogy.