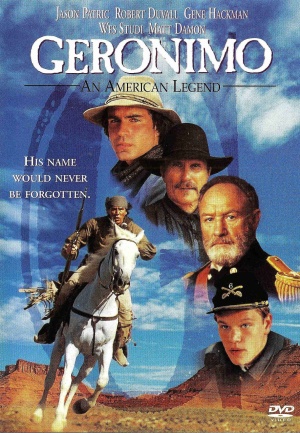 The following weapons were used in the film Geronimo: An American Legend:

The Colt Single Action Army is seen in hands of several characters in the film including Geronimo (Wes Studi) and Gen. George Crook (Gene Hackman).

Gen. George Crook (Gene Hackman) draws his SAA as he prepares to lead the charge.

Sieber fires his SAA during a gunfight in a bar.

Another weapon used in the film is the Remington 1875 revolver, most notably by Lt. Charles Gatewood (Jason Patric) and 2nd Lt. Britton Davis (Matt Damon).

A featured rifle in the movie is the Winchester Model 1866 "Yellow Boy". It is primarily used by Al Sieber (Robert Duvall).

Several characters in the film are seen armed with Winchester 1873 rifles including Geronimo and Gatewood.

Geronimo opens fire with the Winchester.

Gatewood takes aim with the Winchester from his fallen horse.

US Cavalry soldiers are seen with the Springfield 1873 "Trapdoor" Carbine.

US Cavalry prepare to move on the Apache armed with the Springfield 1873 "Trapdoor" Carbine.

Other US troops are seen throughout the film carrying the Springfield 1879 "Trapdoor" Rifle.

Other US troops are seen throughout the film carrying the Springfield 1879.

Geronimo also is seen using a Sharps 1874 Buffalo, notably to shoot out a moonshine bottle held by Joe Hawkins.

Geronimo also is seen using a Sharps 1874 Buffalo, notably to shoot out a moonshine bottle held by a bounty hunter.
Retrieved from "https://www.imfdb.org/index.php?title=Geronimo:_An_American_Legend&oldid=714489"
Categories: