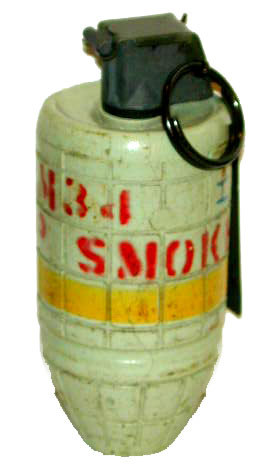 M34 White Phosphorous grenade. This is a post-1987 version with STANAG 2321-compliant markings.

The M34 white phosphorous grenade is an American bursting smoke / incendiary grenade designed by Rocky Mountain Arsenal in the 1950s to replace the WW2-era M15 White Phosphorous grenade, with a redesigned casing to prevent it being mistaken for a burning-type smoke grenade and to allow compatibility with the M1 rifle grenade adapter. The M34 produces a dense, IR-blocking white smokescreen that lasts for approximately 60 seconds.

The pre-scored casing has a far superior bursting radius of 35 metres compared to the 17 of the M15: unfortunately this is actually larger than the 30 metres the average soldier can throw it by hand, making it very dangerous if the thrower cannot retreat to cover before the 4-5 second fuze burns down.

Most existing M34s were manufactured prior to the adoption of NATO STANAG 2321 (which standardised ammunition color coding for rounds larger than 20mm) in 1987 and have light grey bodies with a yellow stripe and black lettering: those manufactured afterwards are light green (indicating a smoke / marker round) with a yellow stripe (indicating the grenade contains an explosive bursting charge) and red markings. As of the September 2000 version of FM 3-23.30 ("grenades and pyrotechnic signals") the M34 was listed as obsolete.