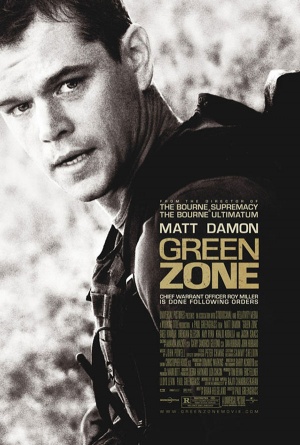 Green Zone is a 2010 Iraq War thriller set in Baghdad a few months following the US invasion. Matt Damon stars as Roy Miller, a US Army Chief Warrant Officer in charge of a MET-D unit tasked with locating WMD throughout the country. When numerous sites come up empty, Miller ventures into the "Green Zone" of safety in Baghdad to find out from the CIA why. The film marked the third collaboration between director Paul Greengrass and Matt Damon (following The Bourne Supremacy and The Bourne Ultimatum) and is notable for the fact that most of the actors portraying the MET-D team were actual veterans of the wars in Iraq and Afghanistan, which is a plus for realism and also explains the excellent weapons handling throughout the film.

The following weapons were used in the film Green Zone:

Chief Warrant Officer Roy Miller (Matt Damon) carries a Beretta 92FS as his sidearm, but doesn't use it in the film. He is also threatened with a Beretta after he is abducted by men with General Al-Rawi (Yigal Naor). Freddy (Khalid Abdalla), an 'asset' working for the Americans, also uses a Beretta towards the end of the film.

Major Briggs searches CWO Miller, who has a Beretta 92FS holstered on his thigh.

An Iraqi "asset" points a Beretta 92FS at one of Al-Rawi's men.

Freddy grabs a Beretta from under the seat of his car.

Miller is threatened by one of Al-Rawi's men with a Beretta.

Members of Miller's Mobile Exploitation Team - Delta (MET-D) unit appear to use Glock 17 pistols as their sidearms. Some Green Zone security guards also have Glocks in their holsters, while Major Briggs (Jason Isaacs) has a Glock holstered on his tactical vest. 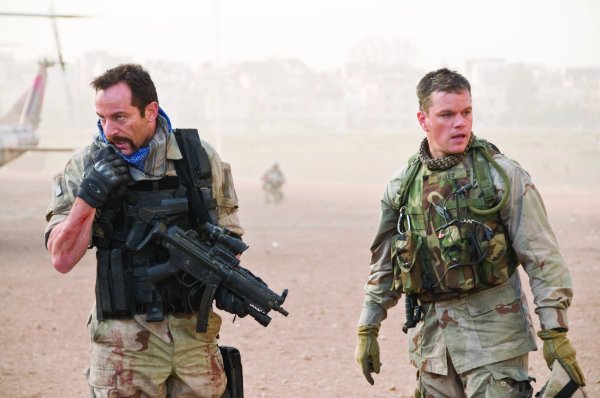 A MET-D soldier points his Glock 17 at prisoners seized during a raid.

One of Miller's men (inaccurately) carries a Glock 17 as his sidearm, visible across his chest. 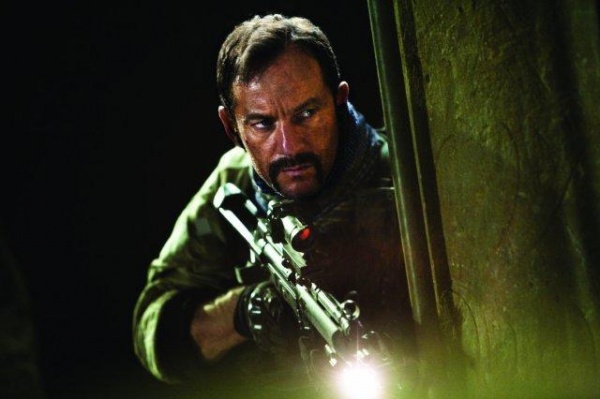 Maj. Briggs with his MP5 in another production still.

Major Briggs searches for Al-Rawi with his MP5 at the ready.

Briggs holds his MP5 on Miller.

A contractor at the airport holds an H&K MP5A2.

Another contractor (at right) with an MP5A2.

Norinco Type 56-1 AK rifles, distinguished by their hooded sights and handguards, are used by most of the Iraqi gunmen. Roy Miller takes one from his captors and uses it when he attempts to track down General Al-Rawi during a battle between Iraqi insurgents and American special forces soldiers. 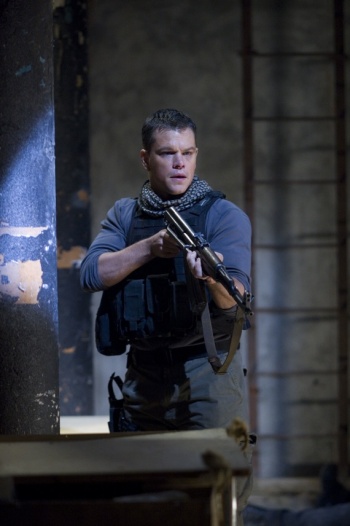 Production still of Matt Damon with a Norinco Type 56-1. 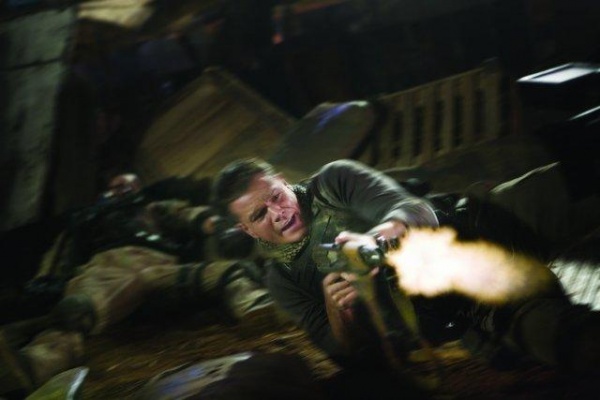 Production still of Damon with the Type 56-1.

Al-Rawi's bodyguard stands nearby him with a Type 56-1 rifle at the ready.

One of Al-Rawi's men holds another Type 56-1 on Miller.

A gunman fires at the SF soldiers.

Miller searches for Al-Rawi with the Type 56-1 at the ready. His trigger discipline is excellent.

Miller and some of his men use M4A1 carbines with a variety of different sights and attachments. Miller's M4A1 is fitted with an ACOG sight and a Surefire 660 flashlight.

The M4s in the movie all have A1-style lower receivers with the older-style 2-position collapsible buttstock, which means that they're actually M4 uppers on lower receiver units taken from older-model CAR-15 variants (the genuine mil-spec M4 was only ever available with the A2-style lower receiver and 4-position and later collapsible stock). Interestingly, they also use the skinnier handguard seen on older CAR-15 carbines, such as the XM-177, 653/654, or 723/727/733. This is not an error typically seen in movies and could be a result of these guns being truly built from scratch.

For reference, an M4 carbine with the correct handguard. 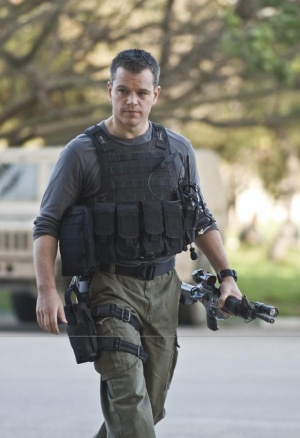 A publicity photo of CWO Miller (Matt Damon) in nondescript clothes and carrying his unloaded M4.

One of Miller's MET-D soldiers rides in a Humvee with his M4 at the ready. Note the ACOG and Surefire 660 weaponlight.

Miller takes aim with his M4 at a sniper in a building across the alley. Note that even after firing to draw the sniper out, the dust cover remains closed when it should be open.

Miller enters the basement of the house where Al-Rawi meets the other military commanders.

Another of Miller's men holds an M4 in the foreground.

Miller's M4 sits on the bed as he types his report on the WMD intel in the climax.

M16A2 rifles are used by various American soldiers throughout the film. Wilkins (Jerry Della Salla) uses an M16A2 with an Aimpoint red dot optic mounted on the carry handle.

A soldier with an M16A2 stands ready at the first WMD site.

Another solder with an M16A2 as Miller's men enter the site.

A clear view of an M16A2 barrel/carry handle as Miller's men try to capture Al-Rawi.

The PMC security contractor on the left has an M16A2.

A soldier with an M16A2 on his back watches (now former) President Bush's "Mission Accomplished" speech on TV.

One of the 101st Airborne troopers sent to assist Miller's MET-D unit uses what appears to be an M16A4 with an M203 grenade launcher. This is actually a G&P airsoft replica, as evidenced from the obvious G&P Marine EV trademarks visible on the lower receiver well.

An 101st Airborne trooper carries a G&P replica M16/M203; note the markings on the lower receiver well (compare to the image above).

Another MET-D soldier holds up his G&P replica M16/M203 while preparing for a mission.

Most of the Special Forces soldiers are armed with CAR-15-type carbines fitted with various accessories, including M68 Aimpoint red dot scopes and Surefire Universal weapon lights. A close inspection reveals that many of the non-firing CAR-15s used by the operators are actually Classic Army XM177 airsoft replica rifles. The firing weapons appear to be Colt Model 733s (or some other variant) fitted with XM177 flash hiders. It seems unusual that a well-equipped SF unit would be using such outdated AR-type rifles in 2003, especially since Miller's unit carries the more modern (and correct) U.S. military-standard M4 Carbine.

The SF unit confronts MET-D; the operator on the right has what seems to be a Classic Army airsoft XM177.

One of the SF operators takes MET-D's prisoner from them; the receiver of his CAR-15 appears to have Classic Army markings.

The SF soldier in the center has a painted XM177-type carbine (probably another Classic Army airsoft replica).

Briggs and his men board a Blackhawk helicopter.

One of Briggs' men fires his CAR-15 into the door of Al-Rawi's hideout; this gun has an M16A2-style receiver with a 10-inch barrel and XM177-style flash hider.

Another view of the CAR-15 used by the same operator above; note the XM177 flash hider, but A2-style receiver.

One of Miller's MET-D soldiers is armed with the M249 SAW. The weapon actually appears to be a standard FN Minimi that has been given an M249-style stock and heat shield (its front hand guard and carry handle are the wrong type for a genuine M249).

A soldier with an M249 throws a water bottle to Iraqi passers-by. Note that the hand guard is different from that of the genuine M249 seen above, indicating that this is actually an original FN Minimi dressed up as an M249.

The SAW gunner puts down a suppressing fire against the sniper.

The SAW gunner takes down the sniper with a well-aimed burst.

A closer view of the M249's receiver.

A gunner on the M2HB.

One of Miller's C-BIST is armed with what appears to be a Remington 700 sniper rifle painted in desert camo, standing in for a US Army M24 sniper rifle. The rifle appears to have a fluted barrel and tactical-style stock with adjustable butt. This rifle is in reality, as many others in the movie, an airsoft replica from Classic Army (Airsoft HK Brand) due to tape covering the airsoft mag.

Several of Miller's men stack up around a corner; the soldier in the center has an M24.

A closer view of the soldier's M24. Note the tape on the handguard covering the airsoft mag.

Iraqi insurgents use a RPG-7 to shoot down an American Blackhawk.

An insurgent runs up some stairs with an RPG-7 (the rear grip barely visible here).

The RPG team fires at a Blackhawk.

Several Ottoman Muskets can be seen in the house of one of Al-Rawi's commanders when the MET-D unit raids the house.

Several Ottoman Muskets can be seen in the house of one of Al-Rawi's commanders when the MET-D unit raids the house.
Retrieved from "https://www.imfdb.org/index.php?title=Green_Zone&oldid=1543651"
Categories: