Remington 870 "Witness Protection" Short Shotgun - 12 gauge. This is the actual screen gun used by Denzel Washington in The Book of Eli. 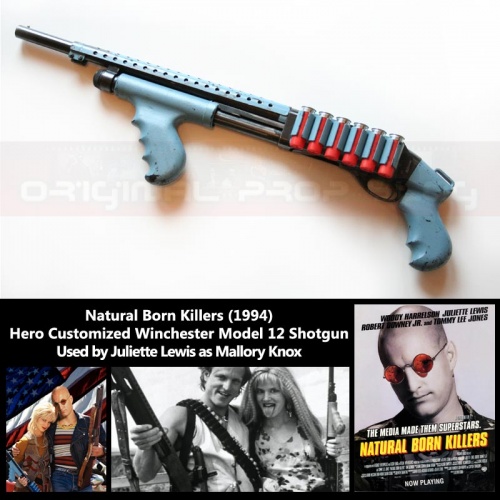 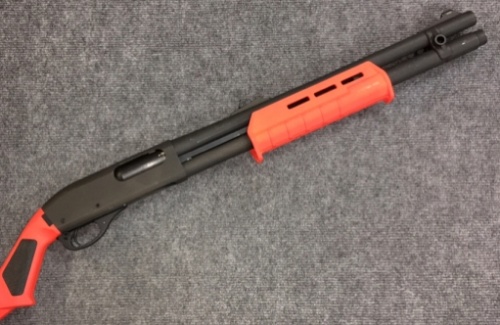 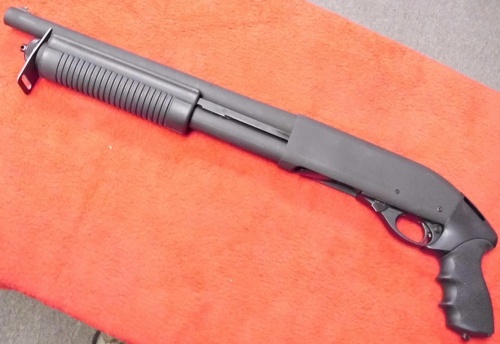 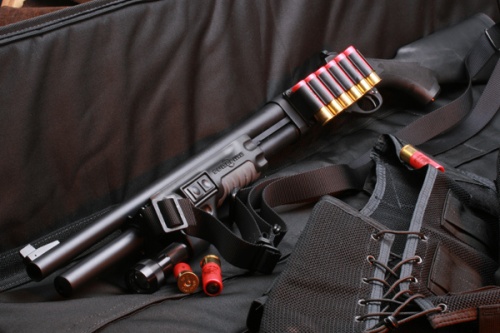 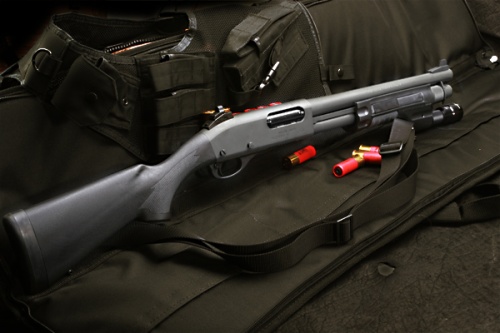 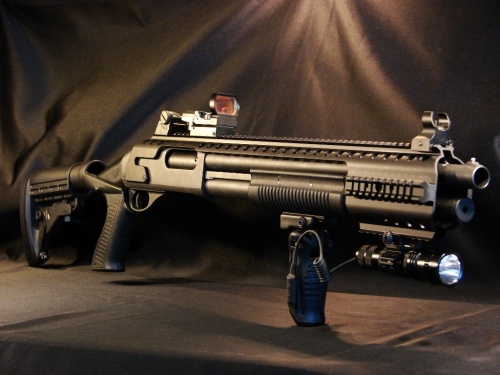 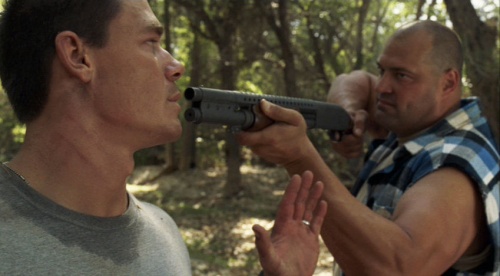 I will raise this question again. Field Gun primarily refers to long-barreled guns (hence the name), to call a short gun with a vent rib "field gun" is ridiculous. Slugster is also quite speculative, as it just might be a smooth barrel with rifle sights. In short, I do not see the point in these categories, otherwise we must then do a separate one for everyone, including trenchguns and etc. --Slon95 (talk) 14:41, 16 April 2020 (EDT)

The uses of the green furniture variant picture show its appeared in at least 8 separate TV shows. Given how distinctive the appearance is and how unusual it is to people unfamiliar with law enforcement tactics, it seems worth a section. I tried, but gave up when trying to format the table. Here's a description I wrote
Due to the extreme dangers of mixing-up normal and "less-lethal" ammo, many (if most) police departments designate specific shotguns to be used only with less-lethal ammo. These shotguns are typically marked with brightly colored furniture or paint. As the 870 is by far the most commonly used shotgun among United States law enforcement, these variants regularly appear in the hands of fictional law-enforcement. --VladVladson (talk) 02:28, 22 April 2021 (EDT)

The issue with that is that that logic could apply to just about any shotgun barring autoloaders. Yes, the 870 is more common than most in this role, but that's mostly just because the 870 is one of the most common pump-action shotguns in existence - plenty of different pump-action shotguns have been, are, and will be used by police departments as less-lethal weapons (especially if you apply a rather loose definition of "less-lethal" - some early riot control officers would just fire birdshot at the ground to ricochet it into people's legs, IIRC). It'd be a slippery slope of Antarctic proportions - you'd essentially be opening the door to any shotgun that anyone could think of, because one or two movies featured someone firing rock salt out of one. I understand that that isn't the intention, but establishing any sort of precedent like that just isn't a very good idea - if we start categorizing guns based on what they can do with specific types of ammo, rather than what they generally/normally are, we're going to have a very large mess on our hands - for example, every single 40x46mm grenade launcher would now be a shotgun because you can fire M576 buckshot out of it, and also a less-lethal weapon because you can fire tear gas out of it, and so on. The less-lethal category is best reserved for dedicated/exclusively less-lethal weaponry. Pyr0m4n14c (talk) 07:42, 22 April 2021 (EDT)

I'm pretty sure he means just having a section for the less-lethal 870 on the page (based on multiple show appearances), not a whole new category. As for formatting the table, just copy one from another section and edit + preview it until you get it right.--AgentGumby (talk) 10:03, 22 April 2021 (EDT)

Correct. I was proposing a section like Remington 870 Slug Gun currently has. The normal tables aren't too bad, but trying to figure how the formatting for multiple characters/episodes had me stumped. --VladVladson (talk) 23:12, 22 April 2021 (EDT)

My bad, I didn't realize that that was what you were talking about - in my defense, I'd just woken up. In that case, go right on ahead; like AgentGumby said, the solution to something you don't understand how to do (especially with regards to table formatting) is just to find another instance of that bit of formatting, and cargo-cult carbon-copy it, filling in new info as needed. Pyr0m4n14c (talk) 23:21, 22 April 2021 (EDT)