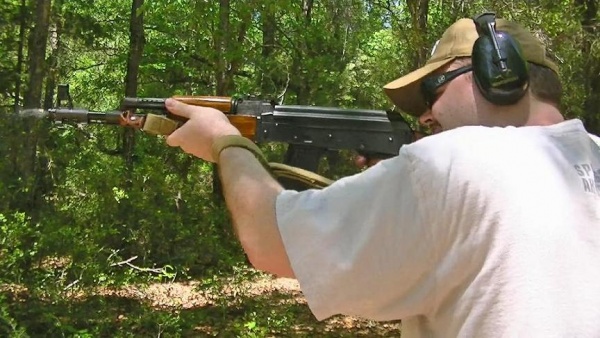 Me firing my Polytech AK.

I like guns, otherwise I wouldn't be on this site. I'm not super into guns, but really into movies. I got around 300 DVDs. So maybe as time goes by, I'll be able to make some good contributions to the site.

I already have all of these on DVD, so no biggie if anybody else beats me to some of them.

Does not include actor pages built and minor contributions 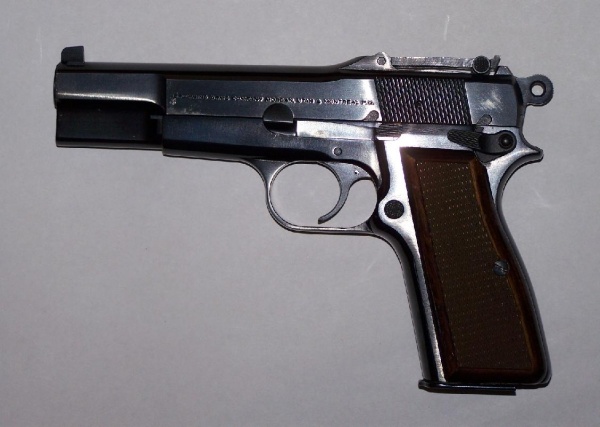 My first gun I ever bought. When I decided to purchase a gun, I wanted a 9mm handgun. The only ones I knew about at the time was Beretta and Glock. The only way I would own Glock, is if it is given to me. So I was set on the Beretta. But decided to look around. I had bought some early '90's gun magazines and there was an article on the then new .40 S&W Hi-Power. They gave a brief history on the Hi-Power and I was sold. This is a Captains model with the tangent rear sight. 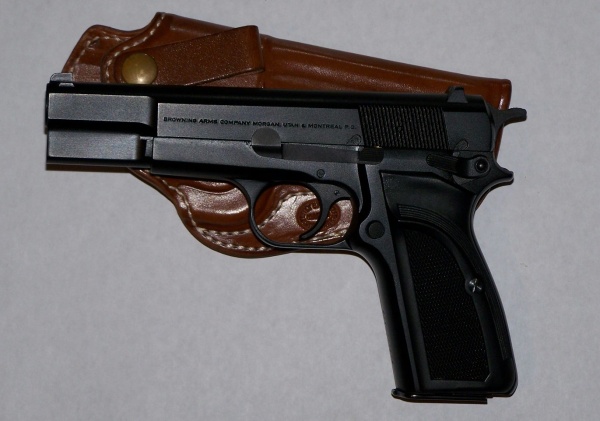 My Mark III Hi-Power, this is my favorite of all my guns. The holster is Milt Sparks. 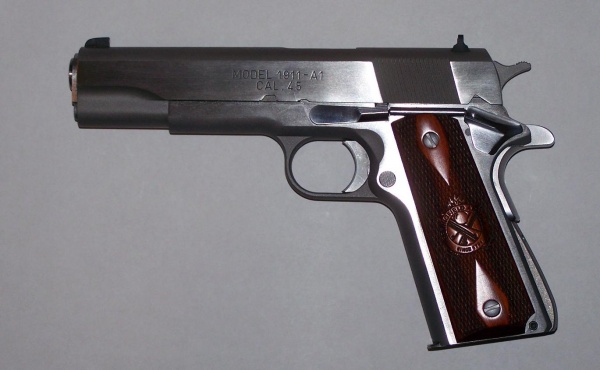 Springfield Mil-Spec in stainless, what I would have purchased but in parkerized instead of the Para GI Expert if the prices weren't so out of line at the time. Went with the stainless since this was going for a good price and wanted at least one 1911 in stainless. 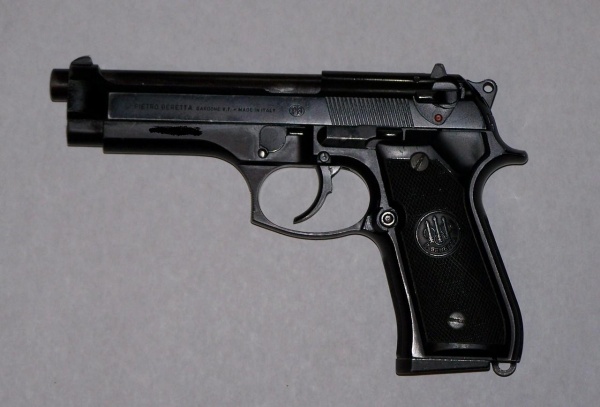 Beretta 92F the type of gun I would have bought if I hadn't found out about the Hi-Power. This was someones former duty gun. I have since traded this to my Grandma for a Colt Challenger. 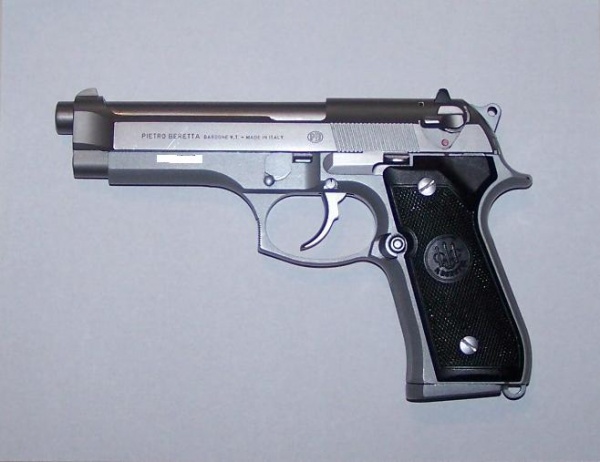 Bought this after trading my 92F and having several spare mags and no gun to use them with. Always loved the '90s Italian Inox's. 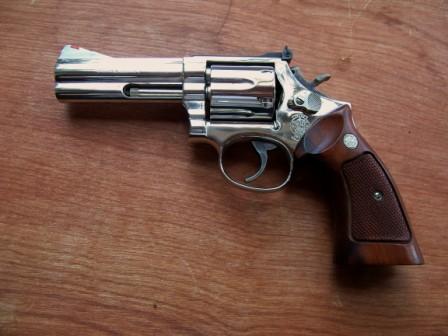 The second gun I ever purchased, I was in the market for a blued 586. But this one came up and I had to have it. This is an auction pic. My pic didn't turn out too well. 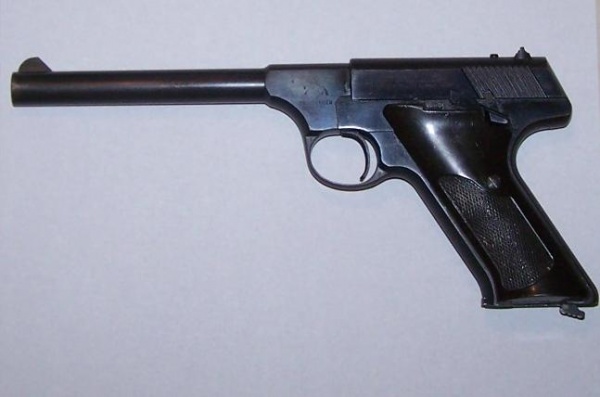 Needed a .22 for cheap practice, so traded my beater 92F for this Colt Challenger, 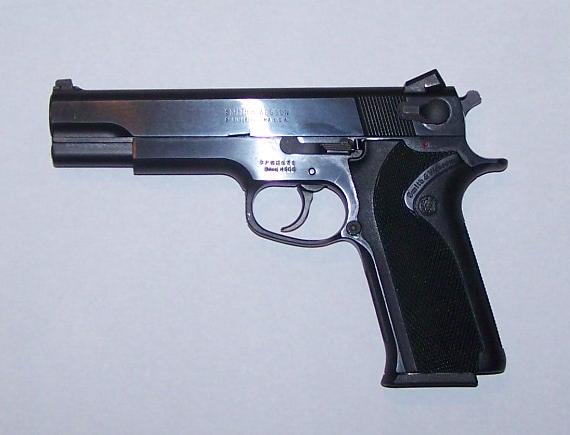 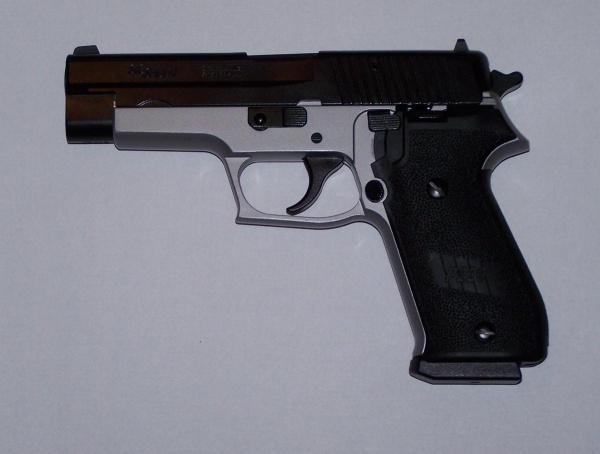 SIG Sauer P220. When I purchased my 4505, I handled a P220 also and thought the grip was better, but they were in poor shape for the price. So picked this off Gunborker. Previous owner had the gun refinished by CCR. Grips have since been swapped for Hogues. 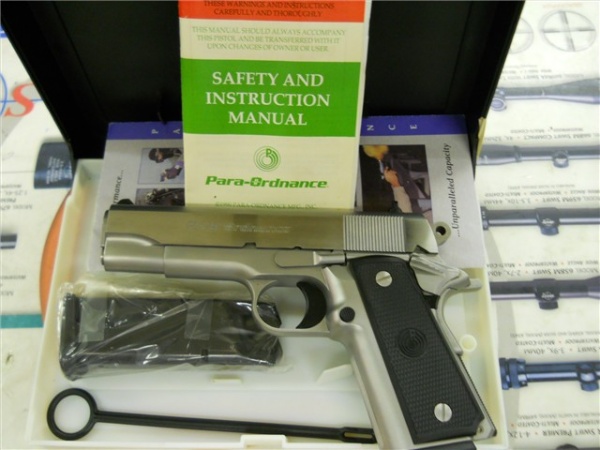 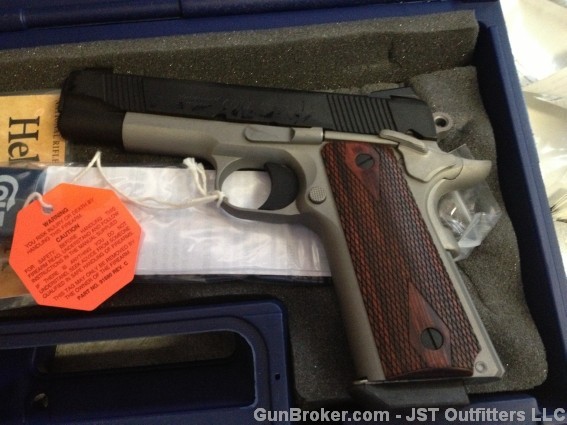 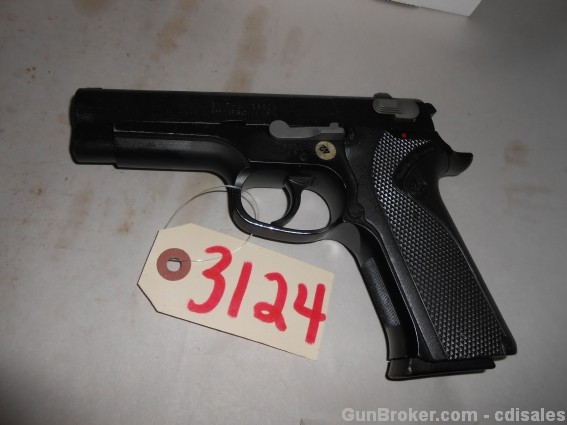 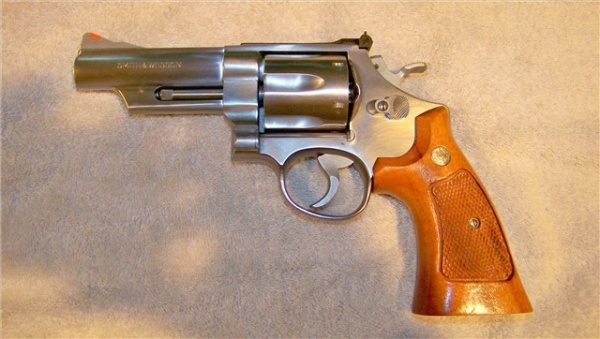 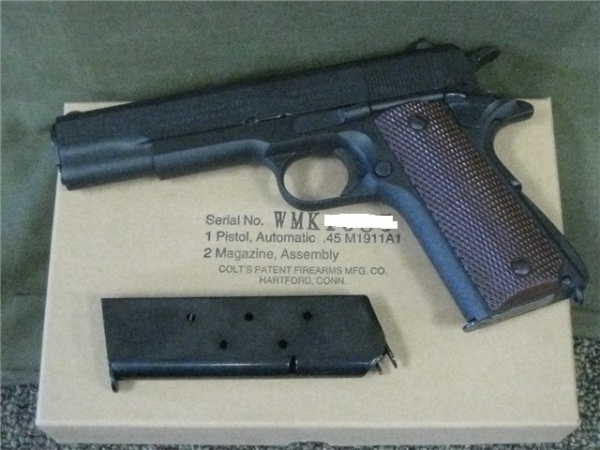 My 10/22 was given to me by my father as a birthday present.

My first rifle, I like the idea of using either .223 or 5.56 mm, while AR's have more accessories. The prices were out of line at the time of purchase. may get one later. But the Mini-14 is fine for me.

870 Police Magnum #2 former prison gun, I had purchased a factory folding stock and couldn't bring myself to install it on my wood stock 870, so I purchased this one. After handling it with the folder installed, went back to standard stock. May add a Speedfeed pistol grip stock in the future. Couldn't beat the price either $250 shipped. 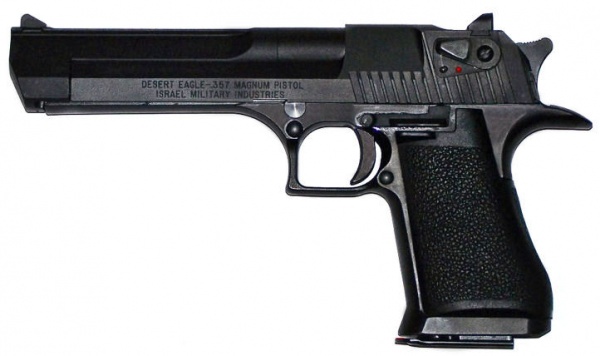 Desert Eagle Mark I .357, probably the least favorite of all my handguns. I don't hate it. It has been a good reliable gun, like all my others. Gumnaster45 touched up the pic so it could be used for the site. I have since traded this gun and my Para 1911 for an AR-15.

DPMS AR-15, traded my Desert Eagle and Para 1911 for it. Was already decked out as you see it. I have added an Ergo pistol grip, still looking for a vertical grip. 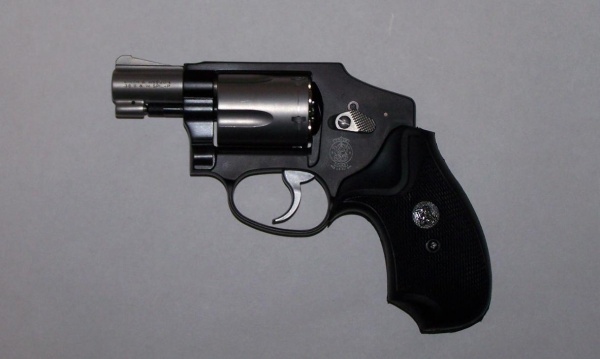 Smith & Wesson 442. Got this after getting my carry permit. Since it is my carry gun, I didn't bother unloading it. I don't care the "two-tone" but with the front sight being silver and the rear black, it's a good contrast. Factory grips were changed becasue it left the backstrap exposed and would beat up my hand when shooting. 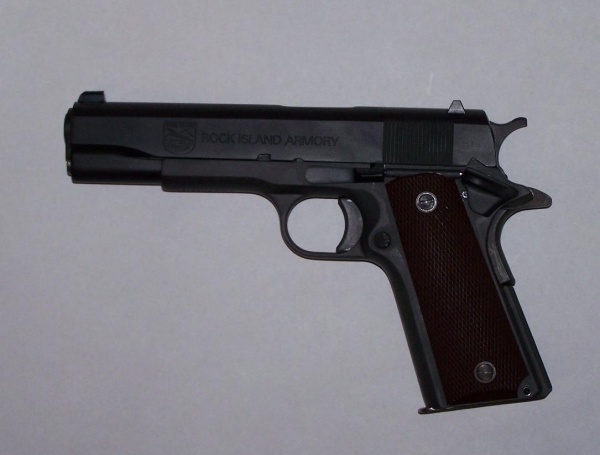 Rock Island 1911 in .38 Super. I have a Colt Commander project in .38 Super wanted to pick a beater. This came with 900 rounds of FMJ and 250 rounds of HP. The total price for everything all together made the gun free. Grips are WWII repros. 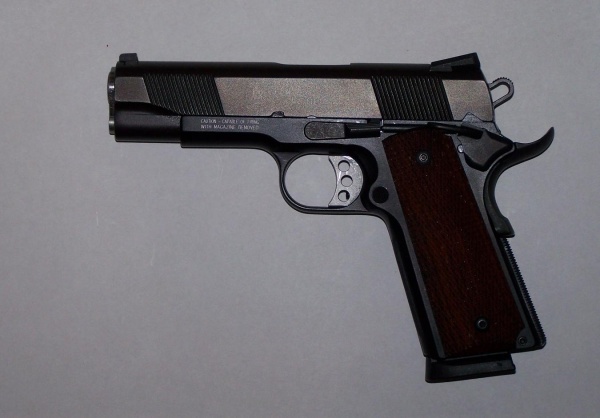 Smith & Wesson 1911PD Commander. Bought this the same time as my AR15. Has a little carry well, but overall in good shape. Grips are off my Springfield Loaded, may add some different ones later.

FN Mark III Hi-Power, it has the factory installed SFS kit. Bought it just for that reason, don't see them very often. 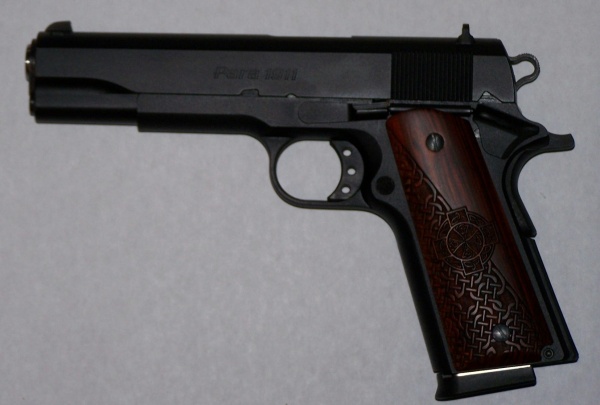 Para 1911 GI Expert. I originally wanted a Springfield Mil-Spec, but at the time there was only the GI or Mil-Spec stainless around. Grips are Esmeralda. I have since traded this gun and my Desert Eagle for an AR-15. 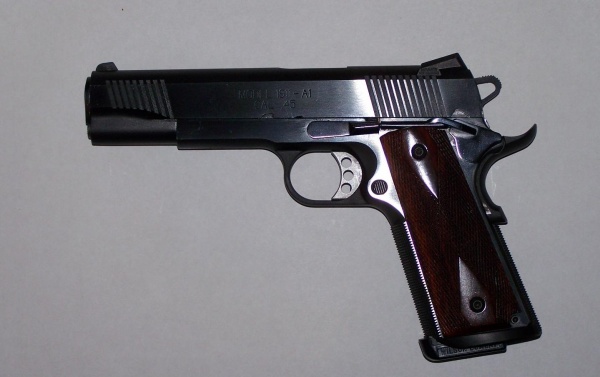 Springfield Loaded. Was just casually searching Gunbroker and saw this one for sale with a BIN for $500. The auction pics made me think the finish was messed up, so I thought that was the reason for the low price. Turns out is was just oil. Checkering and magwell were added by one of the previous owners. Absolutely great trigger. Grips were off my SW1911PD.
Retrieved from "http://www.imfdb.org/index.php?title=User:Predator20&oldid=956992"