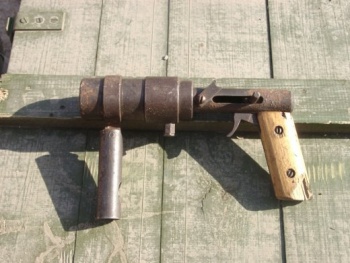 Differences between the GP-25 and the GP-30?

Main visual difference of GP-30(soviet) is sight placed on the right side of the barrel, different shape of pistol grip and lack of support frame behind it. Other differences would be simplified trigger mechanism and improved production technology. There is modern version of laucher called GP-30M, which goes also as GP-30 in Russian militaly nomenclature. This weapon got improved barrel shape, different trigger mechanism and leaf sight(similar to that used for M203) placed on the right side.

The GP-25's in Call of Duty 4 and Modern Warfare 2 are actually GP-30's as evident by the sight mounted on the right, and the GP-30's in Bad Company and Bad Company 2 are Gp-25's with left mounted sights.

The thing is there are quite a lot of Western sources that talk about there being a GP-25 prototype called the BG-15. So we're saying that actually these are what, GP-25 prototypes or limited-issue pre-production models identified by their 6G15 stock number? Evil Tim (talk) 02:05, 29 July 2018 (EDT)

Something like this. From this it follows that the GRAU index is a separate designation, used by them for themselves, separately from the actual name of the weapon ([1]). This is something like NATO designations. It seems that only the early GP-25s had a GRAU marque (I found only one photo with it [2], oothers do not have it), which apparently caused confusion. Russian sources says that GP-25 aka 6G15 was developed in 1972-1978, and in the1978 it was finally adopted for service. --Slon95 (talk) 09:25, 29 July 2018 (EDT)