Accuracy International AE (Accuracy Enforcement) - 7.62x51mm NATO. The AE is a cheaper version of the AW intended for civilian and police use and can be distinguished by its rounded receiver, plain barrel and different bolt with a simpler two position safety (the AW series rifles have a 3 position safety which was also incorporated into later AE MkIII rifles).

1st off for any one confused with whether a rifle is an R700 in an AICS chassis or an Accuracy international, look at the bolt! the AI l96 series uses a ball shape bolt at the end of a round piece of metal while the R700 uses a flat "Tab" bolt handle.

PM/L96A1:The PM, the Grandpops of all the Arctic Warfare series, it is robust and is in 7.62 NATO. It was called the l96A1 by the Brit military until its replacement by the AWSM, the Super Magnum.

AW: The AW is the standard Arctic Warfare, it is only chambered in 7.62 NATO and .243, and has the smallest frame of all the AW series.

AWM: The AWM is the Arctic Warfare Magnum, slightly larger feed and operating system, due to it being chambered in .300 Win. Mag.

IMPORTANT: A surefire way to tell a standard AW from an AW magnum. Look at the magazine! The magnum is .300 WM so the magazine is clearly longer than the standard AW in 7.62 NATO.!!!

AWP: The AWP is for Police, so AWP standing for Arctic Warfare Police. It is always black, not olive drab or tan. It also has a shorter 24 in (610 mm) barrel in comparison to AW model. The AWP is normally chambered for 7.62 mm NATO/.308 Winchester or .243 Winchester ammunition. The AWP is similar to the AW AE which has a black finish, but is a cheaper non-military version of the AW series.

AWS: The AWS(Arctic Warfare Suppressed) is simply a standard AW in 7.62 NATO, with an elongated barrel with an attached suppressor, which unfortunately gives it the effectiveness of a .22 Magnum.

AWC: The AWC is the Arctic Warfare Covert. It is the Standard 7.62 AW with a folding stock, and has a Suppressor similar to a AWS but with a shorter, fatter suppressor. It is often stored and transported in a civilian suitcase.

AWSM: The Arctic Warfare Super magnum, the AWSM is the AW magnum in .338 Lapua. it is the G22 in the German military.

AW50: The AW50 is a AW Magnum chambered in .50 BMG, it's extremely large loading system distinguishes it from others.

AW50F: AW50F is the same as a AW50 except with a folding stock and a fluted Madco custom barrel. This kind is uncommon because it is only used by the Australian Military.

AE: The AE is cheap alternative to the PM/L96. it is made of cheaper materials and less ergonomic, it is simply a meant for police practice and target shooting.

I did my best, researched, and produced. i hope this provides lots of help! Thanks!User:SargeOverkill

Mission Accomplished (from the front page)

NOTE: IMFDB really needs someone who is good with the AW rifles and can tell the more subtle variants apart from each other - i.e. L96 from AW and AWM, AWP from AICS, etc. This page was crap before, treating every AW variant as if it were the L96 (which is the British service version) and eschewing the other variants. However, I don't know enough about the platform to tell them apart, and distinguish between them all in the movies where they appear. So anyone who wants to help out, please do. Thanks. -MT2008

Sir, i have done the job. Check the discussion for the differences.-User:SargeOverkill

I dont think it is, at least not 100%. It has the stock of the PM or L96 (complete mag well, non adjustable cheek riser and flat bottomed butt without monopod) rather than the AW stock, which I'm assuming the AW Covert would have. Just came across this picture though.

AWS - 7.62x51mm
I think this is the AWS, which is the same as the AWC, except the AWC has a folding stock as well and a quick detach barrel: 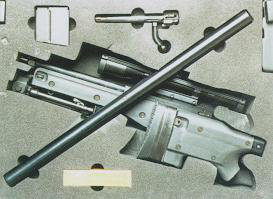 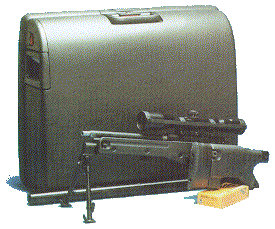 The AW series no longer appears on AI's website and in their catalogues. Looks like the AT (Accuracy Tactical) will be the replacement. Shame if you ask me. - bozitojugg3rn4ut (talk) 12:58, 13 January 2015 (EST)

I think it has actually been discontinued for a little while now (and by that I mean missing from their website) but I believe that they still actually build them for military contracts if required. As much as I do like the classic look of the AW (seems odd to describe a sniper rifle with a polymer stock over a metal chassis as "classic" but whatever), the AT is basically the same weapon with quite a few improvements. It has a new adjustable trigger, it is more modular with better integration for the night vision rail and the Keymod panels on the sides and bottom, it has a quick change barrel, it is likely more ergonomic for most people with that layout, and it has a better folding stock. All that being said, for nostalgic reason though I would still go for the AW every time though. Well, actually I would go for a .338 Lapua AWSM (more so if they could give it the slightly longer action from an AX so it can take any type of .338), as from my opinion the AX series has looks that only a mother could love. --commando552 (talk) 18:24, 13 January 2015 (EST)

Eh, google isn't really a great yardstick for this. If you'd wait, I'd like for commando552 to weigh in on this since he's kind of our go-to guy for this sort of thing. I'd rather do that than change all the image captions for those three gun images on all the other pages they appear on and then have him come in and explain why it said AWSM. Evil Tim (talk) 11:50, 16 August 2018 (EDT)

Originally, the AWM referred to guns chambered in .300 Winchester Magnum (hence the "Magnum") and the AWSM was for guns in the larger more powerful .338 Lapua Magnum (so "Super Magnum", as in larger than Magnum). Wikipedia seems to think that the AWSM terminology is unofficial but I have personally heard AI employees call it that. Also, I believe that the .338 rifles I have seen were marked with an "SM" in the place where the 7.62 rifles have an "AW" which would suggest that the "Super Magnum" is at least partly official. To add, I think it gets farther muddied by the fact that the .300 and .338 rifles originally had different receivers, but then they standardised on one meaning that the .300 rifles are actually slightly overbuilt. To that end, I think that later .300 Win Mag guns are also marked "SM" as they are the stronger .338 Lapua Mag rated receiver. --commando552 (talk) 12:35, 16 August 2018 (EDT)

How is AWSM ambiguous? It is the opposite as it is a specific term for the AWM chambered in .338 Lapua. Only relatively recently have people seemed to decide that AWSM is somehow unofficial, it is like the Wikipedia page was changed and everybody just copied it. There is no source on why it was changed on Wikipedia or proof it is unofficial, and the only discussion about it is an anonymous comment stating "AWSM isn't correct name!! .338 Lapua Magnum ver. is AW Magnum, not Super Magnum!" which sounds totally well researched and source based. As I said before, I have talked to AI employees and reps in person that called it the AWSM (or just "Super Mag" or similar), and there are television documentaries where it is referred to as the AWSM by users, experts and AI employees. You can argue that they are just using it as a nickname (although I would argue that if the manufacturer themselves uses the name it is official to a degree and in common usage), but the fact that the rifles are stamped "SM" in the place that other rifles are stamped "AW", "AE","AX" or whatever suggests to me that it is actually an "official" name. Part of the problem is that AI has always been really crap with their website and producing promotional material as they work on the assumption that there reputation is such that people will come to them so there is very little documentation about there rifles considering the scale of their use. --commando552 (talk) 07:31, 17 August 2018 (EDT)