Post war Walther PP Pistol - 32 acp. Though most of the pistols built immediately after the war were made by Manurhin of France (under license), the guns are marked "Made in West Germany". 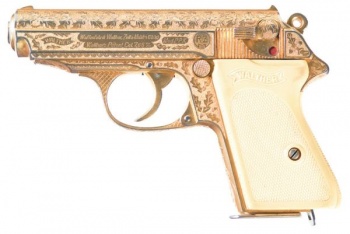 While the K would commonly stand for kurz, German for "Short", PPK means Polizei Pistole Kriminal, the Criminal Police Pistol, noted by its compact criminal size. The Walther PPK is a shortened version of the Walther PP. Since it was the most common compact pistol of WW2 (for the German forces) it is the most famous as well as being the weapon of choice for fictional British Intelligence (MI-6) officer 007 James Bond.

Note, the K does indeed stand for Kriminal, however, this term needs some fleshing out. It is referred to as Kriminal not because of any preferred usage of smaller guns by Criminals, but because this is the gun issued to the Criminal division, i.e. the people who investigate crimes, which would be termed 'Detectives Division' in most U.S. police forces. Just like most patrolmen in the USA carried a 4 inch revolver at the time, and the Detectives often carried a snub nose revolver (Colt specifically calling theirs the Detective Special) so to did the investigative branch of the German Police desire to carry a smaller version of the full sized patrolman's duty weapon.

The PPK was too small for importation into America, so to fix the problem, Walther slapped a PPK slide on a PP frame and built the PPK/S. The most notable way to tell a PPK from a PPK/S is its finish (a PPK/S is far more common as a stainless gun than a PPK) and longer frame spur. Also, Walther did managed to sell more pistols that would otherwise be banned under the harsh rules of GCA-68 by building them domestically (Walther U.S.A.).