The Bourne Supremacy is the 2004 sequel to 2002's The Bourne Identity. Matt Damon returns as the covert operative known as Jason Bourne, who comes out of hiding to expose who is responsible for a series of assassinations that were done in his name. The sequel was directed by Paul Greengrass, who also returned to direct two more features in the series: 2007's The Bourne Ultimatum and 2016's Jason Bourne. The film's plot bears little resemblance to the Robert Ludlum novel of the same name.

The following weapons were used in the film The Bourne Supremacy:

Jason Bourne (Matt Damon) has a Beretta 92SB at the beginning of the movie when he and Marie (Franka Potente) are escaping from Kirill in Goa, India. He is shown pulling one out of the glovebox of their SUV. Presumably, it is lost during the crash.

Bourne grabs a Beretta from his glove compartment and loads a magazine. This can be identified as a 92SB (and not the FS) by its rounded trigger guard and straight front grip.

Bourne performs a brass check on his Beretta while escaping from Kirill.

After Marie is killed in India, Jason Bourne (Matt Damon) packs his Beretta 92FS up with his belongings when clearing out of their former home. Jarda (Marton Csokas), another ex-Treadstone agent, also carries a Beretta.

Bourne picks his Beretta up from the bed to pack.

Jason Bourne (Matt Damon) uses a SIG-Sauer P225 throughout the movie after arriving in Naples, stolen from U.S. Consulate agent John Nevins (Tim Griffin). It is most notably seen when he confronts Treadstone asset Jarda in his home, and when Bourne uses it to shoot through the door of his stolen taxi at Kirill's stolen Mercedes in Moscow and some how shoots 12 rounds instead of the P225's 8. Bourne also used a P225 in his flashback to the Neski double-murder (his first assignment).

Bourne points his P225 at Nevins after disarming him of it.

Bourne aims his P225 at Jarda.

Bourne uses a P225 in his flashback to killing Neski.

Bourne aims his P225 at Kirill.

The FSB assassin Kirill (Karl Urban) uses a 1st generation Walther P99 with a QPQ finished slide during his pursuit of Jason Bourne. It is most notably seen in his hands when he wounds Bourne from an overhead bridge while in Moscow, and later during the film's final car chase when fired from Kirill's Mercedes towards Bourne's taxi. There is also a publicity photo of Bourne (Matt Damon) firing a standard black first-gen P99, though no scene in the movie depicts this. He does, however, use one to threaten Ward Abbott in his hotel room.

Kirill unloads his P99 in the hotel room.

Kirill aims his P99 at Bourne.

Kirill raises his arms, P99 in hand, explaining to the police that he is with the FSB.

Bourne puts his P99 to the back of Abbott's head. 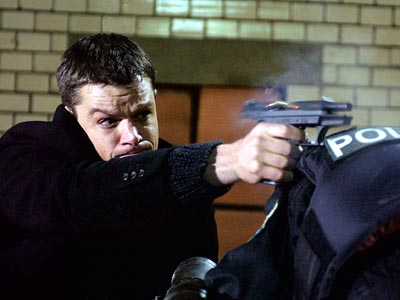 The publicity photo of Bourne firing a P99 (not seen in film).

Some of the German police SEK officers at the Hotel Brecker carry Glock 17s.

A Russian policeman aims his Makarov at Kirill.

One of the Russian policemen reads Kirill's credentials while holding his Makarov.

Bourne slams the Walther down next to Abbott.

Abbott looks at the PP, considering his options.

Abbott points the gun at Landy before turning it on himself.

One of the CIA team responding to Jarda's home alarm carries what appears to be a Glock 19. The scene is very brief and quick so the screenshots are rather blurry but upon closer look the slide definitely puts it in the Glock family not the XD.

One of the 3 agents with what appears to be the compact Glock 19.

Here you can see the angle of the grip indicates a Glock.

One of the German SEK (Spezialeinsatzkommando) officers that are sent to arrest Bourne is armed with a pistol gripped fitted with a door breaching muzzle brake and red dot sight. In real life the German Police uses Benelli shotguns, although without any of the attachments, so this is another error regarding the firearms.

An SEK officer holds his shotgun in the lobby of the Brecker Hotel.

One of the CIA team responding to Jarda's home alarm carries a Heckler & Koch MP5A3. MP5A3s are also carried by the Berlin SWAT officers.

One of the CIA team responding to Jarda's alarm carries an MP5A3.

Some German SWAT officers at the Hotel Brecker can be seen with Heckler & Koch MP5SD3 submachine guns.

One of the CIA team responding to Jarda's home alarm carries a Micro Uzi with a folding stock. 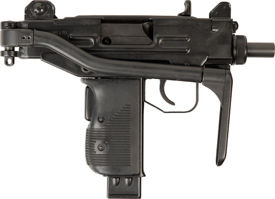 A CIA response team member with a Micro Uzi on the way to Jarda's.

Several of the German SEK (Spezialeinsatzkommando) team officers who attempt to arrest Bourne at the hotel are armed with what superficially appear to be Heckler & Koch G36 rifles. However, a close inspection of the rifles reveals that they are actually the civilian Heckler & Koch SL8-4 version of the rifle fitted with a 30 round magazine and a G36E sight/carry handle.

A German SWAT officer runs through the hotel. Note the lack of a flash suppressor, showing this is not a G36.

A German SWAT officer runs with his G36/SL8 rifle.

A German SWAT officer runs through the hotel. In this screenshot, the SL8 buttstock is clearly seen.

A guard is seen with an AKS-74 after the police call for FSB backup in the Moscow chase scene.

The guard with an AKS-74 is seen at right. Note the AK-74 style muzzle brake and side-fold stock

Kirill (Karl Urban) uses a Sauer Model 202 Takedown Rifle in the beginning of the movie to shoot and kill Marie.

Jason Bourne (Matt Damon) uses a bolt-action, bullpup sniper rifle when talking to Pam Landy (Joan Allen) at the CIA headquarters in Berlin. The scope is a Zeiss Victory Diavari, but the rifle itself appears to be custom-built prop specially for the movie by a gunsmith to resemble the Keppler & Fritz KS II in general appearance. The poster image of Bourne with a scoped sniper rifle appears to show him holding this weapon, however this rifle is actually an unmodified Blaser R93 Sniper Rifle.

NOTE: A number of anonymous users have previously edited this page to indicate that the rifle is a Walther WA 2000. The rifle in question is not a WA2000; it is a bolt-action design (whereas the WA2000 is a semi-automatic), and the receiver is clearly the wrong shape. It is also not a Keppeler & Fritz KS II Precision as previously suggested (see discussion topic).

Bourne's finger on the trigger (notice how the grip and the trigger guard are different from the Walther WA 2000).

Bourne looks through the scope while talking to Landy. 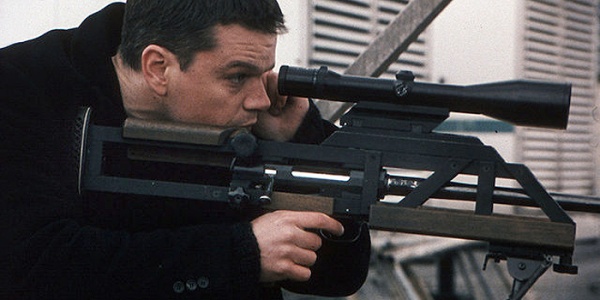