Please stop adding extra pictures to the pages for guns. We can't fit every picture onto those pages, and it's not necessary. Furthermore, you always forget to use the proper alignment, so you do it all wrong. -MT2008 00:26, 24 March 2010 (UTC)

WILL YOU STOP ADDING EXTRA IMAGES TO GUN PAGE?!!!

See, I'm the creator of the Hawk shotgun series page and the uploader of this image. If this image was essential for the page I would have surely added it. But you keep on adding it to the page and that too with the WRONG ALIGNMENT. I have seen you repeat the same thing with other pages too. Just stop doing things here on IMFDB that you can't do properly and JUST STAY AWAY FROM THE GUN PAGES.--SB2296 06:27, 26 June 2010 (UTC)

I know your new, but I must tell you to please do not add animation or cartoons to this site. Anime is okay, but not general cartoons like Family Guy or Aqua Teen Hunger Force. Have a Nice Day :) - Kilgore 02:26, 8 August 2010 (UTC)

Robert Zemeckis was only credited as the writer. We do not categorize movies to people who just wrote the story for the film. - Kenny99 03:01, 31 August 2010 (UTC)

I looked at some of the pages you created and you don't properly fix the image's position. You even had the Elgin Cutlass Pistol image WAY TOO LARGE!!! To fix it, you use the "right" aligned command and you put the gun images' size to 400px. Otherwise, it won't fit the page format most of the other pages use. - Kenny99 03:13, 31 August 2010 (UTC)

You get a two week time out. I for one am tired of UNDOING the erroneous changes you are making to pages. Others have tried to talk to you but you are oblivious or are intentionally ignoring other IMFDB members. You get a 2 week time out until you straighten up. MPM

Add additional gun pics to the talk page please. If the page doesn't have an additional variants list, start one up. --Predator20 16:14, 8 October 2010 (UTC)

You added the "Gun Image" tag to pictures of my personal firearms. I do not want those guns to be tagged this way, as I uploaded those images for my profile only and do not want anyone to think they're images meant to be used elsewhere on the site. -MT2008 23:53, 27 November 2010 (UTC)

Those Beretta's are heavily modified and won't see much use in other pages other than their own. So they below in additional variants.--Predator20 04:27, 7 December 2010 (UTC)

You added a second image of a Mk I Bren when we already had one. If you find duplicate images, mark them as such instead of slapping them into articles. And stop adding Simpsons and Family Guy links. It's already been decided that those shows are not going to be listed, so all that does is add a dead link that encourages new users to make those pages.--PistolJunkie 06:12, 20 December 2010 (UTC)

You added new images to the Galil MAR and STG44 page that were a) of variants already shown, and b) of inferior quality to those already shown. Please, stop doing that. If you find images like that, mark them as duplicates instead of slapping them into articles and expecting someone else to clean up after you. It's not hard.--PistolJunkie 08:30, 21 December 2010 (UTC)

Production art used in anime (such as the weapon designs from Hellsing) should not be added to weapon pages, as those variants were never actually made.--PistolJunkie 04:34, 24 December 2010 (UTC)

I uploaded these for a discussion on the Way of the Gun. They will no be used anywhere else, so I took them out of additional variants.--Predator20 19:59, 21 December 2010 (UTC) 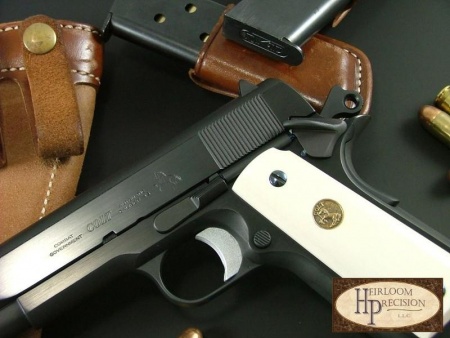 Non Series 70 Rollmark Combat Government - .45 ACP. These came out in the early 80s, very few in these rollmarks. 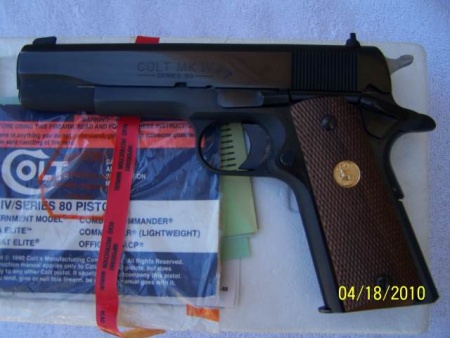 Please do NOT make pages that have none of the guns identified. Just putting up a page with "Unknown revolver" and "Unknown rifle" is not acceptable. Also, with the amount of changes you've been making, you should consider creating a profile instead of just having your IP address being shown. --Ben41 05:33, 23 December 2010 (UTC)

That screen used section is for guns that have been in actual films. I decided since there were so many additional 1911 variants that we should categorize them better. Also you should really consider signing up with a username. --Predator20 06:12, 3 January 2011 (UTC)

When you make a new page for a gun, make sure you align the images to the right, and place them before the test so that they start at the top of the page.--PistolJunkie 01:22, 6 January 2011 (UTC)

if you are certain that there are other guns in the movie not listed in the article, please show some initiative by taking screencaps of them instead of turning a perfectly presentable page into an amateurish one by adding no-effort sections like "sniper rifle" and "unknown handgun". It's IMPOSSIBLE for anyone else to improve those sections without taking the screencaps for you, so you are effectively declaring the page incomplete but demanding that someone else clean it up for you, which I've already done several times. And if you are actually reading these posts on your talk page, please respond somewhere so that we know you are actually listening.--PistolJunkie 06:23, 8 January 2011 (UTC)

Evidently you insist on changing pages and not consult with anybody. It also appears that you won't respond to anybody so once again you are being blocked for awhile. This is your second and last chance. Take several months off and see if you can figure out how this site works. Bye Bye.--Jcordell 02:33, 9 January 2011 (UTC)

This is the discussion page for an anonymous user who has not created an account yet, or who does not use it.

We therefore have to use the numerical IP address to identify him/her. Such an IP address can be shared by several users. If you are an anonymous user and feel that irrelevant comments have been directed at you, please create an account or log in to avoid future confusion with other anonymous users.