X-Men: First Class is the fifth film in the X-Men film franchise. The 2011 film is a prequel to the original X-Men and is set primarily during the early 1960s, notably at the height of the Cuban Missile Crisis. The film, which was directed by Matthew Vaughn, primarily examines the beginning of the friendship between Charles Xavier (who would become Professor X) and Erik Lehnserr (who would become Magneto). The majority of this cast, which includes Jennifer Lawrence and Nicholas Hoult, would be featured along with members of the original trilogy in 2014's X-Men: Days of Future Past.

The following weapons were used in the film X-Men: First Class:

A Luger P08 is used by Dr. Klaus Schmidt (Kevin Bacon) while testing Erik Lehnsherr's powers during the 1944 flashback. Later, an Argentinian bartender (Carlos Peres) holds one on Erik (Michael Fassbender), who then kills him and uses the gun to finish off the remaining officer.

While leveling the Luger at Erik's mother, Schmidt cautiously stares down at the coin.

The bartender to left with his Luger as Erik stabs a former SS member.

Erik kills the last former SS member with a Luger.

Charles Xavier (James McAvoy) uses a M1911A1 pistol when training with Erik. Erik is later seen holding it when he and some of the students watch President Kennedy's address. A Division X agent (Tony Curran) fires one at Sebastian Shaw (Kevin Bacon) during the Hellfire Club's assault. It is also seen holstered and used by various U.S. soldiers, notably the soldier in the truck heading to the General's palace.

Charles thumbs back the hammer on an M1911A1 pistol. While not visible in a screenshot, this scene opens with the camera focused on the pistol's muzzle, then focuses on Charles, giving a clear view of the trademarks on the slide as it does this.

Another shot of the same scene. When Charles hands the pistol to Erik after this, Erik lowers the hammer.

Another shot of the same scene. Amusingly, Erik gestures at the TV with the pistol at one point in this scene, though as noted above the hammer is decocked.

The Soviet General (Rade Serbedzija) pulls a Tokarev TT-33 on Erik and Charles during the confrontation. Another is seen in the hands of a soldier on the Soviet battleship.

The Soviet General pulls out a TT-33.

The Soviet General (Rade Serbedzija) aiming his TT-33 at Charles and Erik.

Moira MacTaggert (Rose Byrne) uses a Walther PPK near the end of the film. 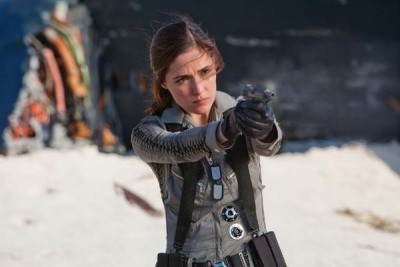 A slightly modified Bergmann Pistol is seen being used by a Division X agent during the Hellfire Club's assault on the Division X building. 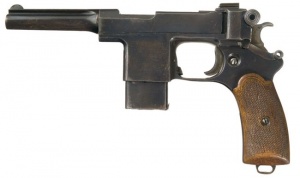 The Division X agent aiming his pistol at Azazel.

Another shot of the same Division X agent with the Bergmann pistol.

The two Division X guards to the left and right with Hotchkiss submachine guns before Azazel (Jason Flemyng) stabs them.

A close up of the same guard.

Azazel impales a guard armed with a Hochkiss submachine gun with his tail.

Division X guards use Madsen M50 submachine guns during the raid on Shaw's boat and the Hellfire Club assault on Division X.

A U.S. Coast Guard crewman to the right of Charles with a Madsen M50.

The guard in the center is wielding a Madsen M50

A Division X guard with a Madsen M50 before being engulfed in the inferno caused by Shaw.

SS Guards are seen with MP40 submachine guns during the 1944 flashback.

An MP40 slung by the side of the SS guard to the left.

The two prison guards behind Erik and Charles armed with Winchester 1912s.

Soviet border guards and the General's palace guards are armed with AK-47s.

Soviet border guards with AK-47s. Note the middle guard's chicom chest rig, which wasn't used by the Soviets until the Soviet-Afghan war.

A Soviet palace guard aiming his AK-47 at Erik.

Another guard with an AK-47 being forcefully lunged forward by the AK-47 being controlled by Erik.

Erik disassembles the AK-47s of two Soviet guards with his metal-controlling powers.

Soldiers accompanying Charles, Erik, and Moria to the Soviet General's palace are armed with Colt Model 933 assault carbines modified by armorer David Fencl (The Hurt Locker, Iron Man) to resemble prototypes of the XM177/CAR-15. They are recognizable as M933s by the detachable carry handles and 6-position LE stocks, but the A2-type flash hiders have been removed and replaced with fake XM177-style flash hiders - Which would be anachronistic because CAR-15s were not invented with the configurations of the telescopic stock until the late 60s, which should instead be a fixed stock like the one on the M16. There were however prototypes of early CAR-15s in the early 60s, but they did not look like the ones in the movie.

Soldiers in the truck with Colt Model 933 rifles while heading to the Soviet General's palace. Note that all of the CAR-15 rifles in the movie have XM117-style flash hiders and anachronistic telescopic stocks.

Soldiers aim their CAR-15 rifles while being visually concealed by Charles' telepathy powers.

SS Soldiers are seen with Karabiner 98k rifles during the 1944 flashback.

Two SS guards with K98ks slung on their backs.

American GI's are seen with M1 Garands during the aftermath of the assault on Division X. They are also carried by the U.S. Coast Guard crewman during the raid on Shaw's yacht.

The crewmen to the far left and behind Charles with M1 Garands.

American GIs walking by the remains of the Division X building with M1 Garands.

American Gis on the top right with M1 Garands.

American soldiers aboard the Naval Blockade are armed with M16A1 Rifles. Since this movie took place during the Cuban missile Crisis in 1962, this rifle, like the CAR-15, is an anachronism because M16s were not issued to US military en mass until the onset of the Vietnam war and the fact that the M16A1 was not produced until 1968.

U.S. Navy crewman drop their M16s to the ground in response to Banshee's ultrasonic screaming.

An MG42 is seen being manned by a soldier in a machine gun nest during the 1944 flashback.

A German soldier manning an MG42 during the 1944 flashback.

A pair of Oerlikon 20mm Cannon can be seen mounted on some of the U.S. Navy ships blockading the Soviet ships.

An Oerlikon cannon can be seen in the background during the fight between Beast and Azazel.

A pair of Oerlikon cannons to the left of Angel. Note that only the right-hand gun is loaded.

In a continuity error, the Oerlikon cannons mounted on the U.S. Navy ship Beast and Azazel fight on changed into a Browning M2HB.

A Browning M2 in the background.

A DShK is seen mounted on a Soviet jeep at the Soviet checkpoint near the General's palace.

A DShK mounted on the jeep to the right.

A Division X agent is briefly seen firing a M72 LAW at Sebastian Shaw during the Hellfire Club's assault. The weapon is anachronistic as the weapon was not adopted until 1963.

A Division X guard fires his M72 LAW at Shaw.

Sideview of the M72 LAW.

Shaw snatches the grenade from Hendry.

Shaw intentionally pulls the pin to demonstrate his energy-absorbing powers.

A prototype version of the X-Jet appears near the end of the film. Hank/Beast designed it, and it is essentially a giant SR-71 Blackbird with VTOL capability and a passenger area. In the comics, the final X-Jet is actually called "Blackbird" and is said to be a follow-on to the SR-71 built by Lockheed and / or Stark Industries.

The X-Jet prototype soars through the confrontation between the U.S. and Soviet ships.
Retrieved from "https://www.imfdb.org/index.php?title=X-Men:_First_Class&oldid=1406746"
Categories: