X-Men: Days of Future Past

X-Men: Days of Future Past is the 2014 installment in the X-Men film franchise. Based on the "Days of Future Past" comic book series, the film finds Wolverine (Hugh Jackman) traveling back in time telepathically to the 1970s as he tries to locate a young Professor Xavier (James McAvoy) in order to stop the formation of the Sentinels, the killer robots responsible for the extinction of humans and mutants in the future. This sequel was directed by original X-Men director Bryan Singer and is the first to combine the casts of both the original X-Men trilogy as well as the younger versions of themselves featured in 2011's X-Men: First Class. The prequel cast would appear to two more films: 2016's X-Men: Apocalypse and 2019's Dark Phoenix.

The following weapons were used in the film X-Men: Days of Future Past:

The M1911A1 is seen throughout the film, namely as the sidearm of Major William Stryker (Josh Helman). Both Erik Lehnsherr (Michael Fassbender) and Raven/Mystique (Jennifer Lawrence) are seen taking up the M1911A1 pistol at various times. Both Stryker and Raven are seen holding a custom pistol designed without any metal parts during a confrontation with Erik.

Raven/Mystique (Jennifer Lawrence) tries to disarm Stryker of his M1911A1.

An M1911A1 is held by Raven/Mystique (Jennifer Lawrence). 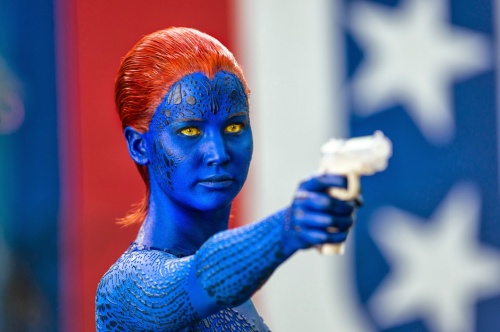 Raven/Mystique holding the non-metallic gun in a production still.

Raven with the custom pistol.

The Smith & Wesson Model 19 Snub Nose is seen pulled by guards during a confrontation with Mystique (Jennifer Lawrence). The revolvers are also the sidearms carried by US Secret Service agents guarding President Nixon.

A guard pulls what appears to be a snub-nosed Smith & Wesson Model 19 Snub Nose during a confrontation with Mystique (Jennifer Lawrence).

Guards in the secret Pentagon prison are armed with a revolver that resembles a Colt Python. In order to prevent the use of Magneto's powers, these revolvers and their bullets appear to have been made of a special non-metal material.

Guards in the secret Pentagon prison are armed with a custom non-metallic revolver that resembles a Colt Python as they are confronted by Quicksilver.

US soldiers in Vietnam are seen carrying M16A1 rifles. Guards overseeing the transport of the Sentinels appear to be armed with the M16A1. These guards also appear to be wearing anachronistic PASGT helmets, which didn't enter US service until the early 1980s.

A solider in the background with an M16A1.

A soldier stands guard with an M16A1. The guard is wearing a PASGT helmet, which did not enter US service until the early 1980s.

The M14 rifle is seen briefly carried by US soldiers in Vietnam.

To the right, a soldier has an M14 rifle slung.

A Colt XM177 Commando carbine is seen briefly carried by US soldiers in Vietnam.

A closeup of the Colt XM177E2 Commando carried by soldier in a helicopter.

M60 machine guns are seen mounted as doorguns on Huey helicopters in Vietnam.

The Huey helicopter with an M60 machine gun mounted as a doorgun.

The Sentinels presented on the White House lawn in the 1970s are armed with a special rotary cannon that resembles an M61 Vulcan. In the film, these weapons are made of a special polymer and fire ceramic rounds.

The sentinel with the Vulcan-based rotary cannon.
Retrieved from "https://www.imfdb.org/index.php?title=X-Men:_Days_of_Future_Past&oldid=1406748"
Categories: