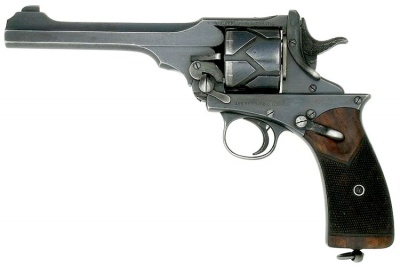 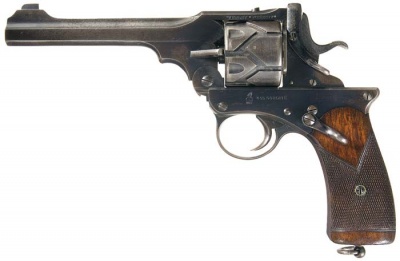 The Webley-Fosbery Automatic Revolver is a revolver manufactured between 1901 and 1924 by Webley and Scott noteworthy for it's "automatic" mechanism. The prototype was made in 1895 by Lieutenant Colonel George Vincent Fosbery based on a Colt Single Action Army, he then took it to Webley and Scott due to the Webley's stronger lockwork and its faster reload given the top break. It was built in several slightly different versions, including some with shorter or longer barrels, Metford rifling and even .22 single shot barrels. There were only 4750 Webley-Fosbery Automatic Revolvers built.

The action of the Webley-Fosbery is the most famous part of the revolver, it's a recoil operated revolver where the upper receiver shunts back on a track in the grip assembly to recock the hammer and rotate the cylinder. When the gun fires, the upper receiver assembly recoils back to recock the hammer, and a diamond stud on the bottom operates with the grooves in the cylinder to cycle to the next cartridge on the return stroke. This combined with a lightweight trigger made it a popular target pistol in the early 1900's.