The following weapons were used in the film Appaloosa:

Virgil Cole (Ed Harris) carries two Single Action Army revolvers in the film, his main being a 7 1/2" Cavalry model with bone grips and his belt gun a 5 1/2" Artillery. Many other characters use them in the film as well.

Virgil points his Single Action Army after dispatching two criminals in the bar.

Instead of holstering his Single Action Army after firing it like in most macho westerns, Virgil dumps out the empty shells (using the ejector rod, something few actors know exists) and reloads before putting it away.

"Colt makes a heavy firearm, that's a fact."
Virgil remarks after knocking out a thug's tooth with the butt of his Single Action Army.

Virgil readies his Single Action Army before confronting Ring Shelton (Lance Henriksen) and his gang outside the prison. Also note his 5 1/2" Artillery in his belt.

Everett Hitch (Viggo Mortensen) places a Nickel Cavalry Single Action Army on the bar counter before challenging Randall Bragg (Jeremy Irons) to a duel. Presumably this SAA is one that was taken from the late Ring Shelton, since Ring is seen with a similar nickel finish Single Action Army with white grips.

Bragg picks up and very professionally checks the Single Action Army to make sure he is given a loaded weapon.

The bone grips of Virgil's Single Action Army are seen during the end credits.

A disassembled Single Action Army during the credits.

Everett Hitch (Viggo Mortensen) carries a Colt 1871-72 Open Top .44 Caliber Revolver as his sidearm in the film. This is a subtle note in the film but a logical choice, as both his rifle (1866 "Yellow Boy") and his pistol are chambered for the same .44 Henry rimfire cartridge.

Everett draws his Colt 1871-72 Open Top when Bragg and his men enter the jail.

Everett fires his Colt 1871-72 Open Top after being wounded in front of the jail during the gunfight with Ring Shelton (Lance Henriksen) and his gang. Luckily both he and Virgil survive the encounter.

Everett reloads his Colt 1871-72 Open Top after the duel at the end of the film, and also shows he knows how to use the ejector rod.

Everett Hitch (Viggo Mortensen) carries a Winchester 1866 "Yellow Boy" as his rifle in the film. Sheriff Clyde Stringer (Rex Linn) carries one while escorting Randall Bragg (Jeremy Irons) on the train. One of the Apaches is seen using one with tribal decorations as well. 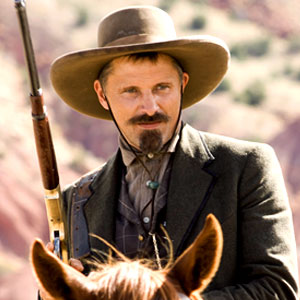 A promotional image of Everett Hitch armed with his Winchester 1866 "Yellow Boy".

Everett holds back Bragg's gang with his Winchester 1866 "Yellow Boy". 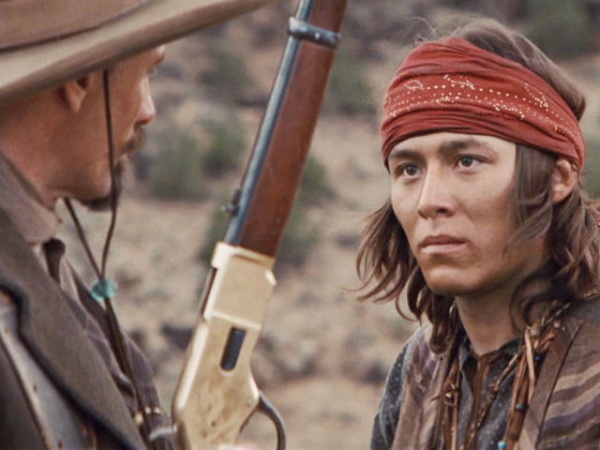 Everett confronts an Apache while armed with his Winchester "Yellow Boy".

Bragg shoots a deputy at the beginning of the film with his Winchester 1873 "Short Rifle".

Bragg then proceeds to shoot Marshal Jack Bell (Robert Jauregui) and his other deputy with his Winchester.

Virgil waits to arrest Bragg as he exits his outhouse, armed with his Winchester 1873. Note the octagonal barrel.

Virgil aims his Winchester 1873 at Ring Shelton (Lance Henriksen) and his gang from the train.

A good shot of the brass dropping block.

Virgil fires his Winchester 1873 at the Apache pack horse.

Virgil points with his Winchester 1873. 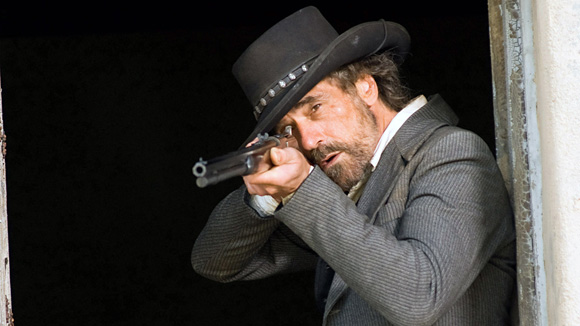 Bragg aiming his Winchester 1873 from the second floor of the jail house in a promotional image. Note how the hammer is covering his entire right eye.

Charlie Tewksbury (Corby Griesenbeck) is seen aiming a Spencer 1860 Carbine from a window of the train.

One of the Apache Indians is seen using a Sharps Carbine of unknown year. It is never seen clearly in the actual film, but luckily is seen in the DVD special features. 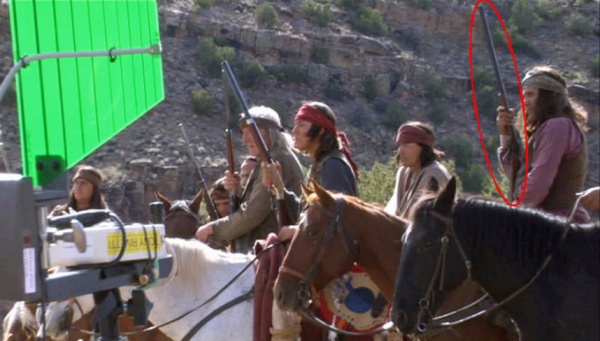 An Apache Indian armed with a Sharps Carbine.

One of the Apache Indians is seen using a Trapdoor Springfield 1873 Saddle Ring Carbine. It is never seen clearly in the actual film, but luckily is seen in the DVD special features. 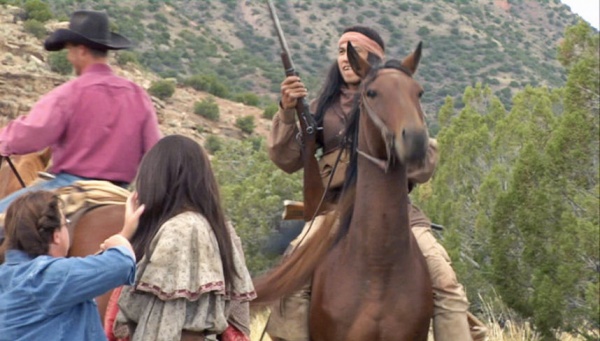 Everett Hitch (Viggo Mortensen) carries an 8 Gauge Double Barreled Shotgun in the film, referred to only as "The 8 Gauge" in the dialogue. To handle the vicious recoil of the massive weapon, Everett has a leather pad sewn into the shoulder of his coat to help absorb it. Since the only existing 8 Gauges today are antiques and are unsafe or too expensive to fire, an ingenious alternative was made. Armorer and gunsmith Steve Karnes built three "8 Gauges" for Gibbons Ltd. out of reproduction Colt 1878 shotguns, two of which fired 12 Gauge blanks with 8 Gauge sleeves over the barrels to increase the bore diameter and hide its real caliber, while one was built to chamber 8 Gauge inert rounds for scenes in which the gun was loaded, as the size between 8 and 12 Gauge is far too different for no one to notice. To see more on the production of the shotguns, visit the SK 1878 shotgun page, with actual information and images by Steve Karnes.

Everett (Viggo Mortensen) kills the third gunman in the bar with his 8 Gauge, which unrealistically throws him back across the bar.

Everett loads his shotgun with two 8 Gauge shells in a small segment cut from the film. Note how he keeps the shells between his fingers, a method Viggo Mortensen was taught by his father. This is commented on in the audio commentary for A History of Violence, where you see him handle a side-by-side in a similar manner.

Everett has his 8 Gauge rested on his shoulder while talking with Phil Olson (Timothy Spall).

Everett with his 8 Gauge rested on his shoulder.

Everett aims his 8 Gauge at Randall Bragg (Jeremy Irons) in his cell when his gang tries to bust him out of jail. 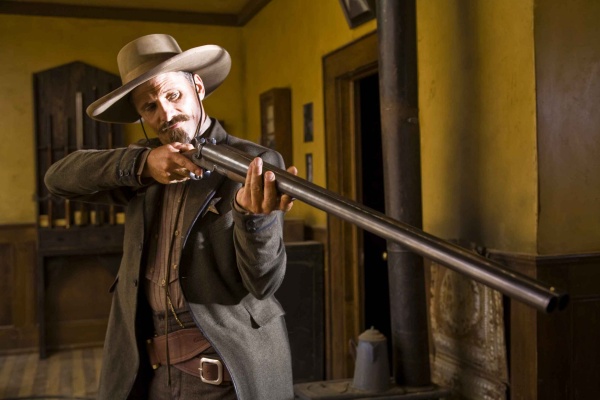 Everett aims his 8 Gauge shotgun at Bragg in a promotional image.

Everett aims his 8 Gauge at Ring Shelton (Lance Henriksen) and his gang from the train.

Everett with his 8 Gauge when confronting the Sheltons and their gang in front of the prison.

Close up on the triggers of the 8 Gauge during the credits.

The 8 Gauge and the ammunition belt during the credits.

A 12 Gauge Double Barreled Shotgun can be seen on the gun rack in the jailhouse. Ring Shelton's brother, Mackie (Adam Nelson), is also seen using one to hold up Allison French (Renée Zellweger) when trying to force Virgil Cole (Ed Harris) to give up Randall Bragg (Jeremy Irons).

Trivia: Appaloosa is Ed Harris and Adam Nelson's first film appearance together since 1989's The Abyss, 19 years earlier; in both films, Ed Harris played the lead character, whose name in both films is Virgil.

A double barreled shotgun in the jail house gun rack.

A closer shot of the scene.

A shotgun is seen on the dead pack horse along with a Winchester 1873 rifle.
Retrieved from "https://www.imfdb.org/index.php?title=Appaloosa&oldid=1507280"
Categories: