The Horror of Blackwood Castle (Der Hund von Blackwood Castle ("The Hound of Blackwood Castle") is a 1968 German detective movie directed by Alfred Vohrer. Despite the film is listed in Edgar Wallace film series, it isn't based on any Wallace's work but rather draws inspiration from Arthur Conan Doyle's The Hound of the Baskervilles. Young Jane Wilson (Karin Baal) appears at Blackwood Castle that belonged to her recently deceased father, Captain Wilson. In short time, several people, connected to the castle, are killed, some of those were attacked by a horrible dog with poison teeth. The plot leads to the precious jewels that disappeared on Captain Wilson's ship years ago. Sir John (Siegfried Schürenberg), the head of Scotland Yard, decides to held the investigation personally.

The film is the 25st installment in the Rialto Film studio Edgar Wallace film series (1959-1972). 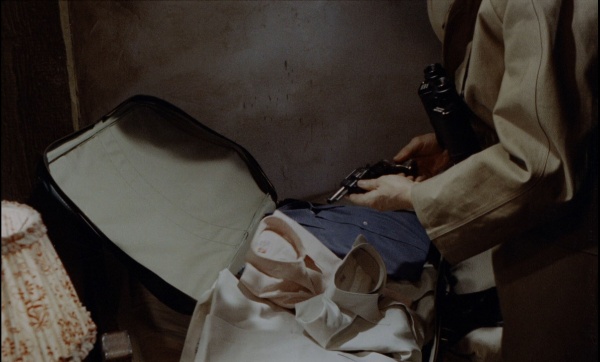 Connery finds a revolver in the suitcase of murdered Mr. Tucker. 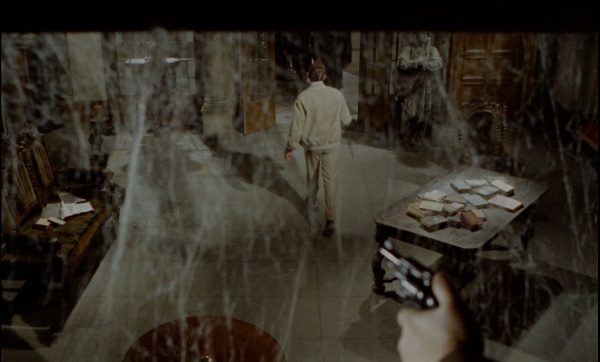 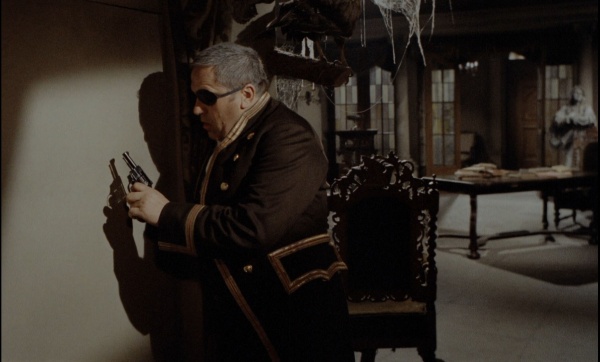 A good view of Grimsby's revolver. 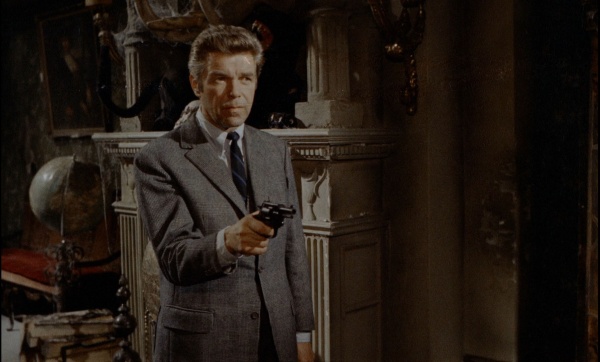 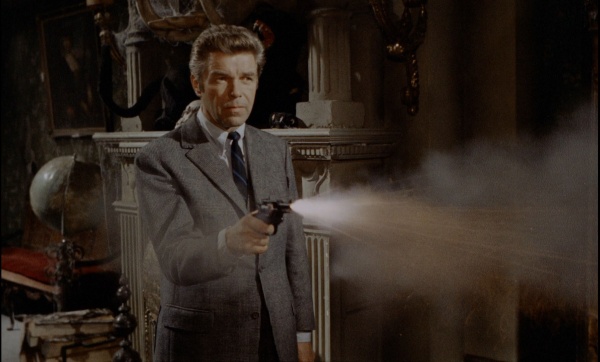 Connery fires his revolver in the climactic scene. 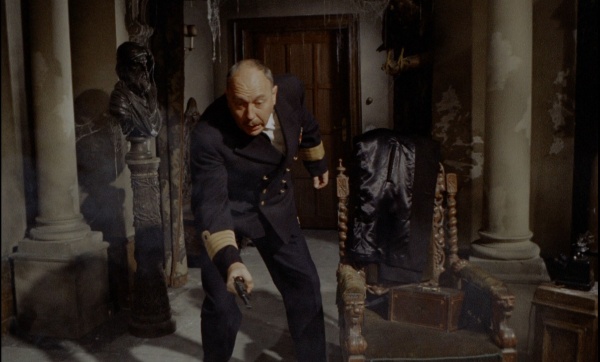 Captain Wilson draws his revolver but he is gunned down before he could use the gun.

For the second and final time in the series (after The Hunchback of Soho), Sir John (Siegfried Schürenberg) carries a gun. His pistol is an Astra 600. In the final scene Connery (Heinz Drache) disarms Sir John and holds his pistol. In one scene Donald Fairbanks' (Horst Tappert) Browning Hi-Power switches to an Astra 600 due to a continuity error. 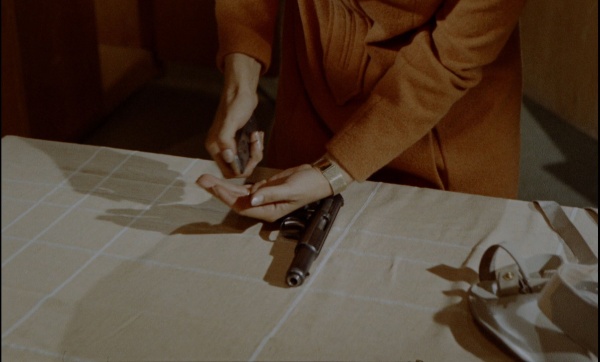 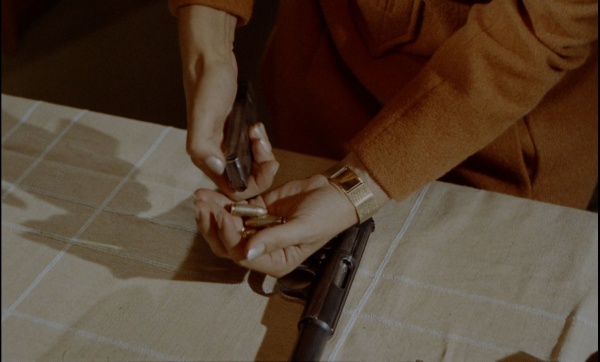 She empties the magazine, being afraid that clumsy Sir John could accidentally shoot himself. 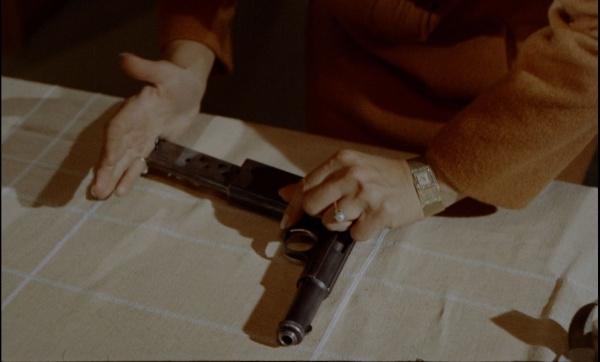 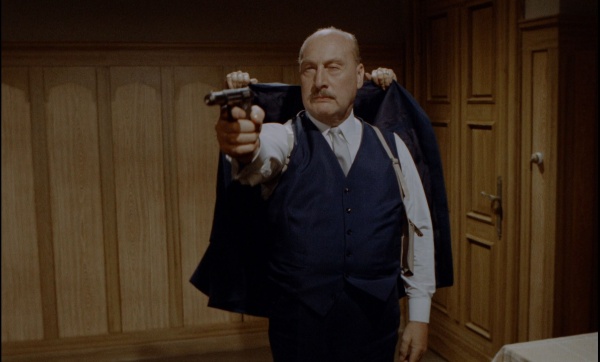 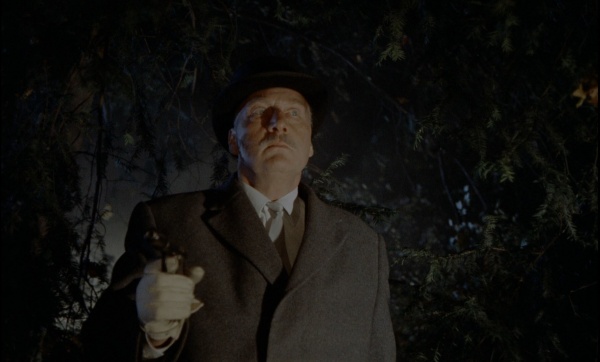 Sir John draws his pistol in the night scene on the moors when he hears the eerie howling (Bogs make queer noises sometimes, right?). 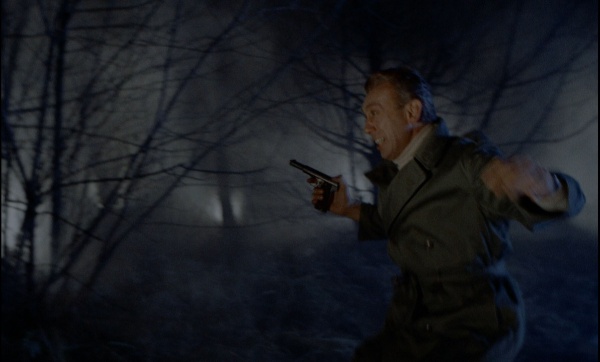 Fairbanks' Hi-Power is replaced by an Astra when he runs across the moors, pursued by a horrible sabertooth hound (dont' ask!). 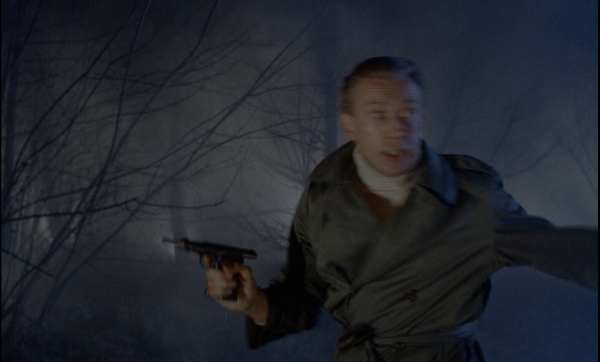 Despite Fairbanks didn't fire his pistol, the slide is suddenly locked in the rear position. 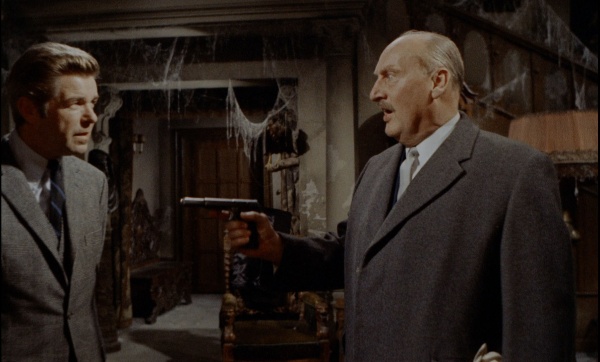 Sir John draws his pistol on Connery in the final scene. 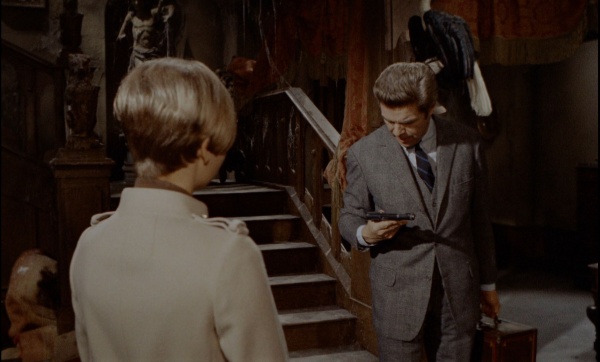 Connery holds Sir John's pistol but is surprised to find it unloaded. 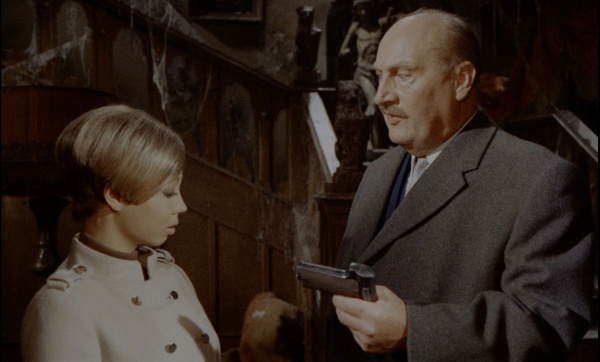 Miss Finley explains what has happened with the gun. 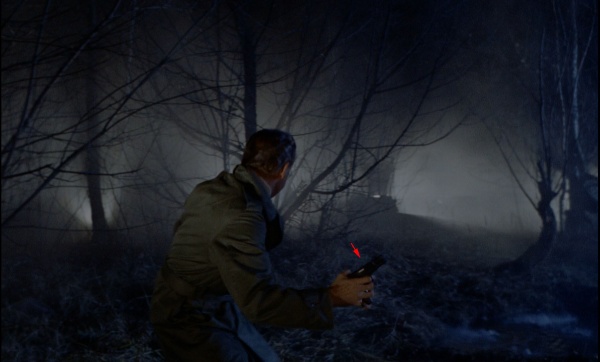 Fairbanks draws his pistol in the night scene of the moors (Had he ever read: I counsel you by way of caution to forbear from crossing the moor in those dark hours when the powers of evil are exalted?) 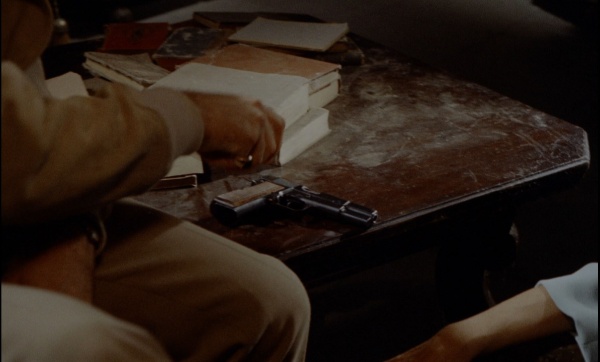 Fairbanks' pistol on the table. 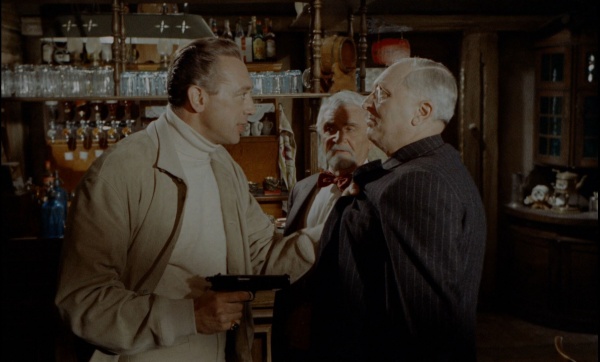 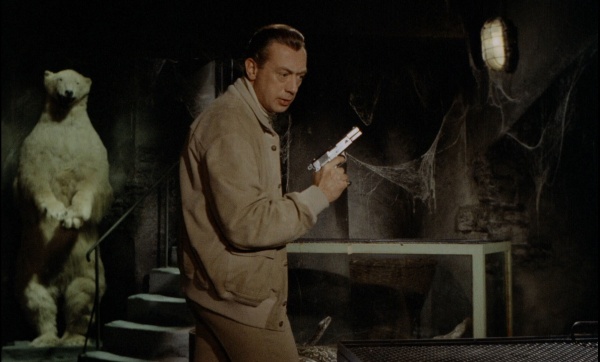 Fairbanks sneaks into the basement of the castle. 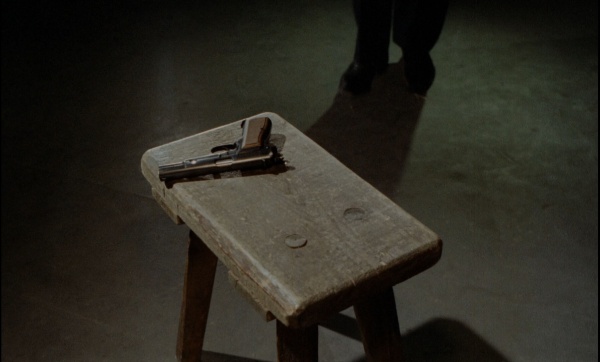 He recklessly puts the gun aside. 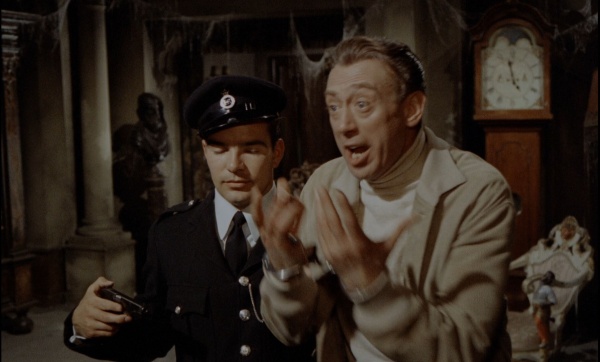 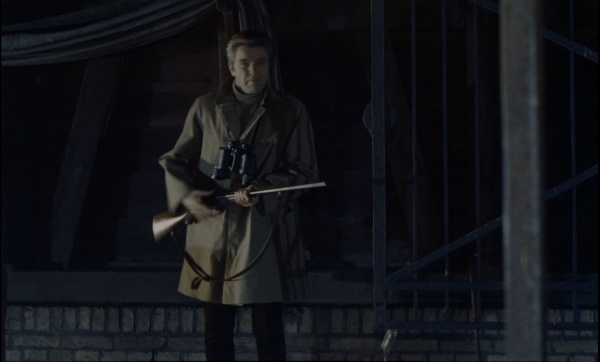 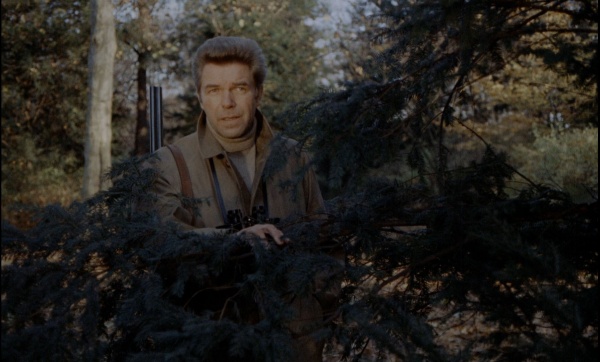 Connery carries the shotgun on sling. 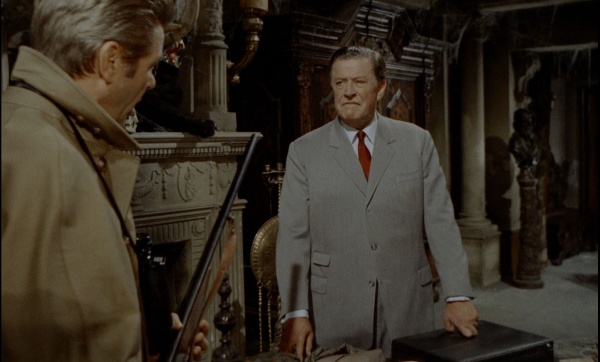 Connery holds the shotgun during the conflict with the lawyer Robert Jackson (Hans Söhnker). 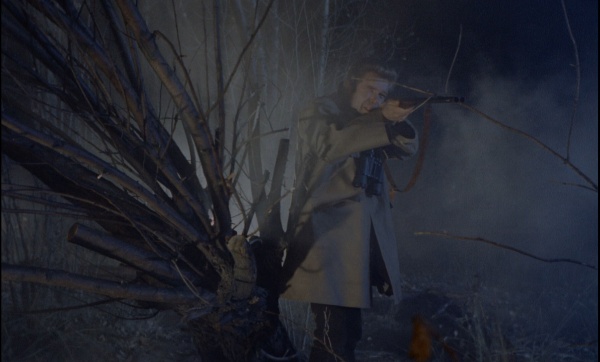 Connery fires at a hound on the moors.