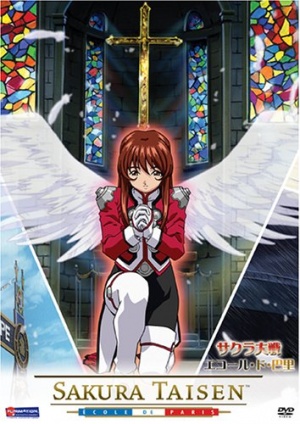 The following weapons were used in the OVA Sakura Taisen: École de Paris:

The FN Model 1910 is used by Paris Prefecture police detective Jim Évian as his main sidearm. The physical features of the pistol (such as the markings), unfortunately, were not shown in the OVA series. 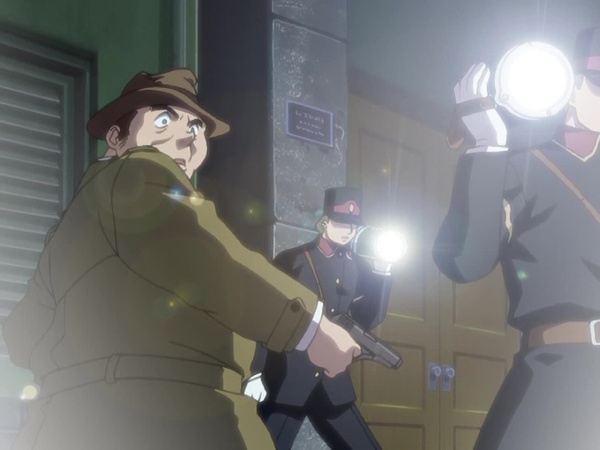 Detective Évian and a few uniformed Paris Prefecture police officers make a visual inspection of the street to see Erica knocked out in the garbage in the same episode.

The revolver cannon makes an appearance at the end of "The City of Love", hidden underneath the Arc de Triomphe. In the Sakura Taisen 3 game, it's stated that the cannon is used as a long-range device to launch Kobus and supplies throughout continental Europe in situations where there is a need to send them to far-flung countries in the continent in case of a confirmed demon appearance. Its appearance is a shoutout done by writer Satoru Akahori to Samurai Pizza Cats, one of his previous works. 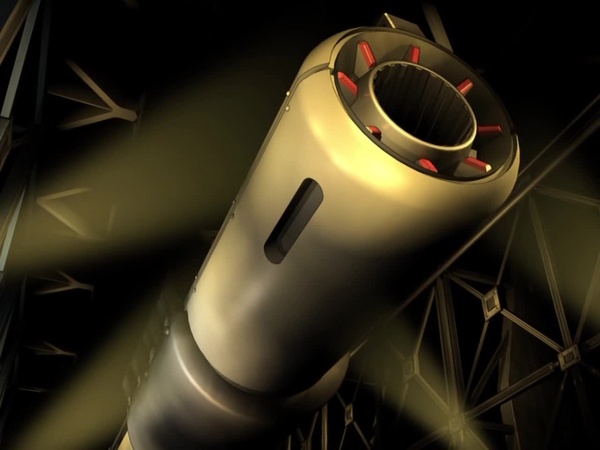 The barrel of the revolver cannon hidden under the Arc de Triomphe. 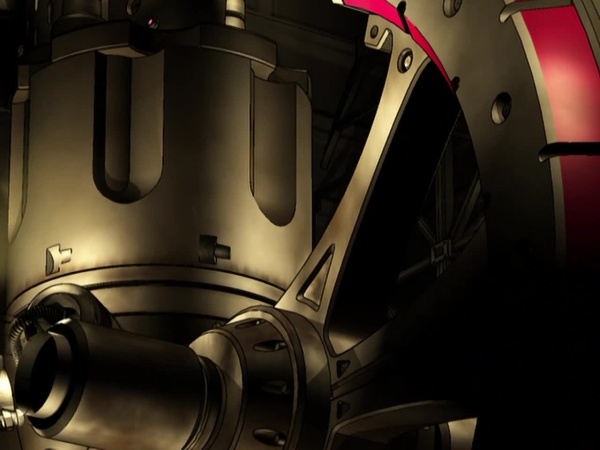 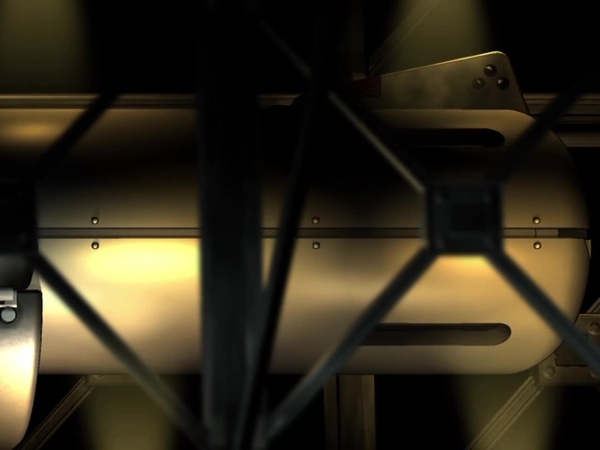 The side view of the revolver cannon's barrel, which also includes the front iron sight. 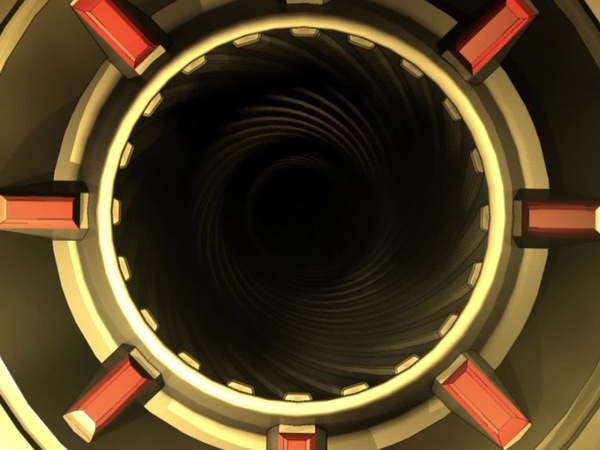 A good closeup of the revolver cannon's bore.

One of the signature weapons of Erica Fontaine in the Sakura Taisen universe, she is armed with the Gabriel submachine gun. It's only seen in the episode "Flowers at Daybreak". It appears to be visually based partially on the Bergmann MP18 as a base.

Bergmann MP18/I "System Schmeisser" - 9x19mm. Some parts of the "Gabriel" are visually based on the MP18. 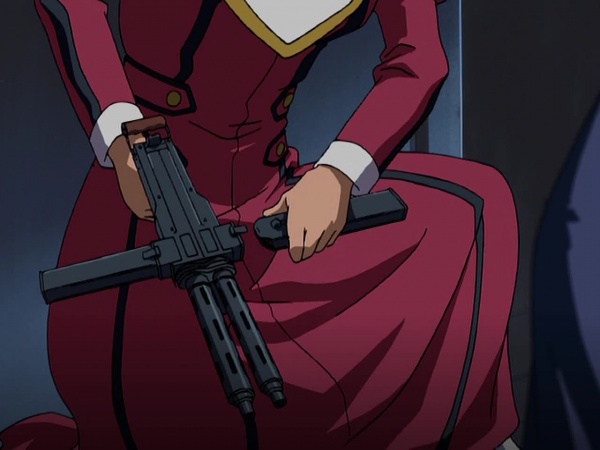 Erica loads up on the Gabriel, preparing to insert a magazine on the left port of the submachine gun. 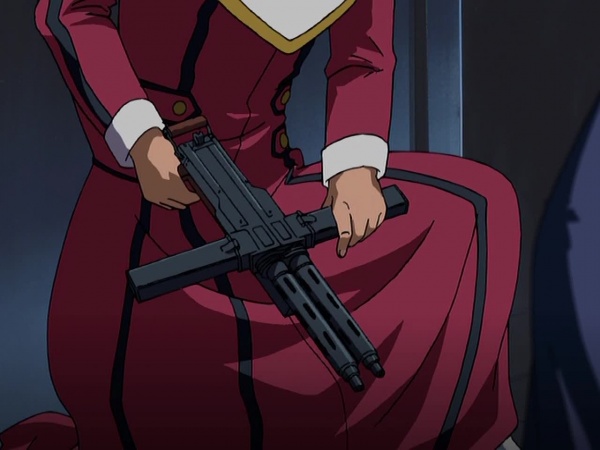 Loaded and ready to go. 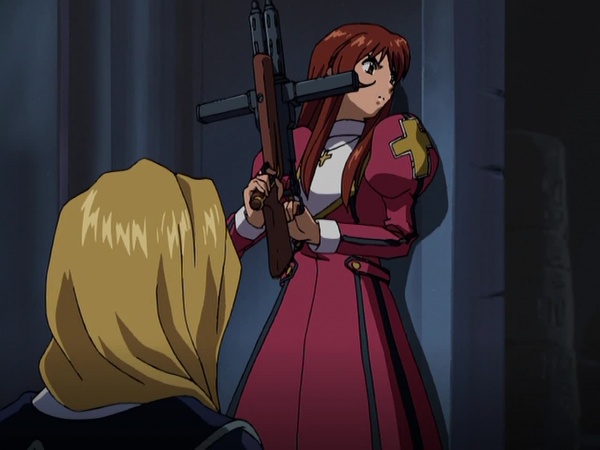 Erica pulls the bolt of the Gabriel back after the submachine gun is loaded. 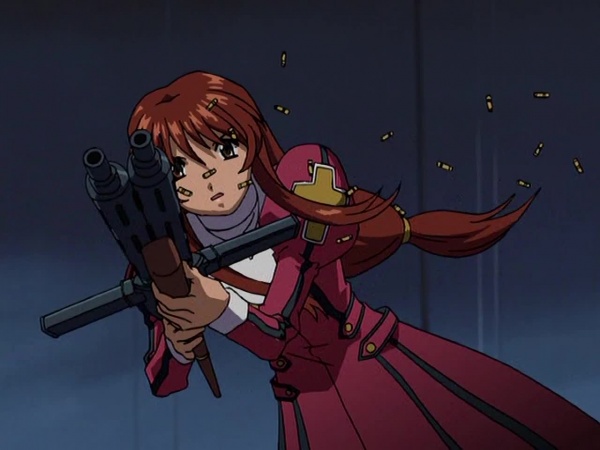 Erica opens fire with the Gabriel after she engages demons in the history museum. 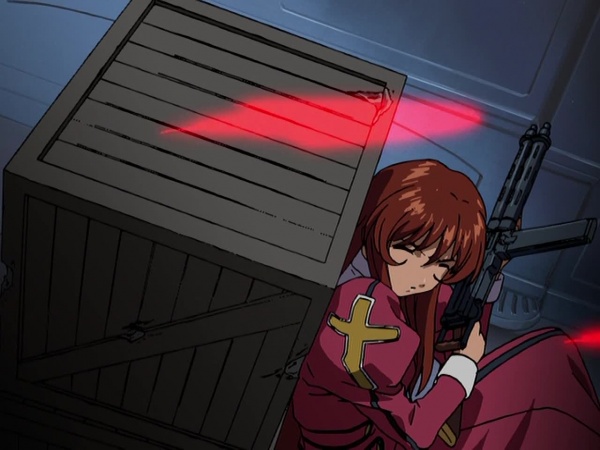 Taking cover behind a wooden crate to avoid demon projectiles.

Erica's Koubu-F uses a Koubu-F-sized submachine gun as its main weapon as seen in "The City of Love". Like the Gabriel, it has some visual basis on the Bergmann MP18.

Bergmann MP18/I "System Schmeisser" - 9x19mm. Some parts of the Koubu-F's submachine gun are visually based on the MP18. 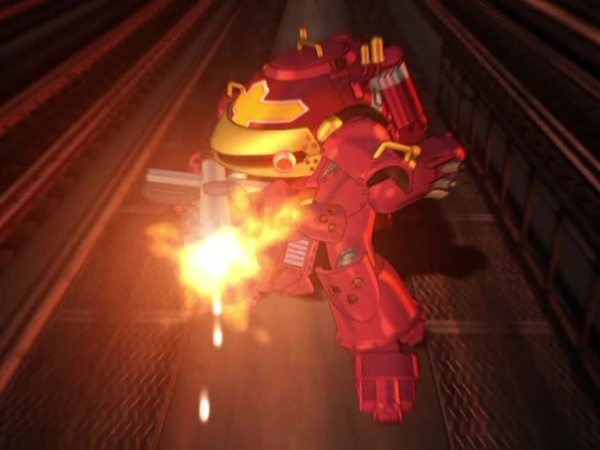 Erica opens fire with her Koubu-F's submachine gun at a possessed Pawn Blanche. 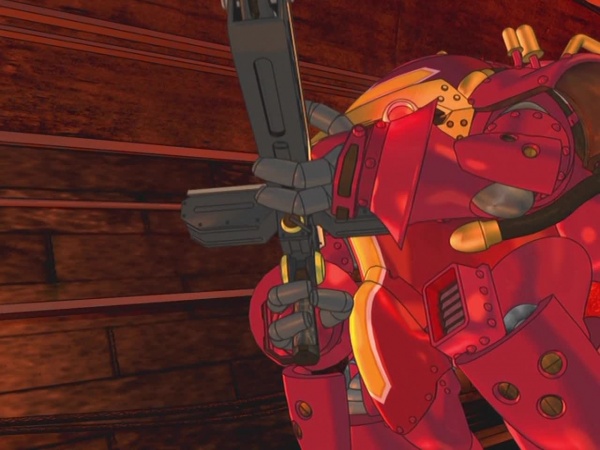 A good closeup of the Koubu-F's submachine gun.

The Arisaka Type 38 was used by Norimichi Sakomizu, Japanese ambassador to France, in "The Black Cat and the Bad Girl" as part of the plan to forcibly recruit Lobelia into the Groupe Fleur de Paris. It appears to have a Unertl-like scope mounted on its receiver with a crosshair-type reticle. Ambassador Sakomizu is shown to be a crack shot, using the rifle to fire a special anti-spirit energy bullet in order to paralyze Lobelia before Paris Prefecture policemen could subdue her. 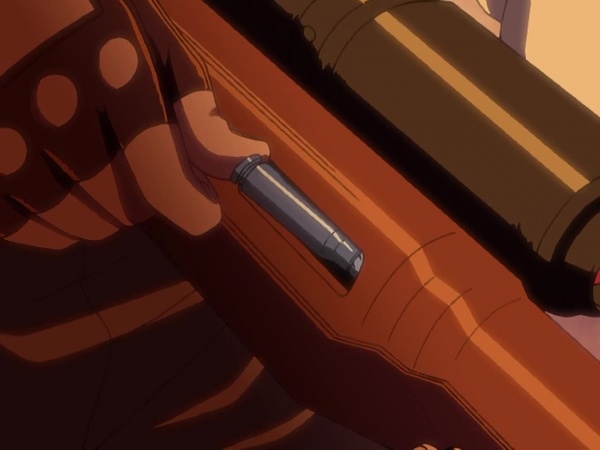 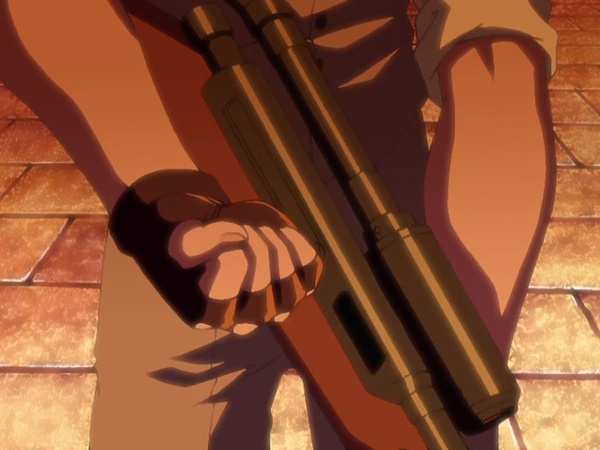 Pulling the bolt back. 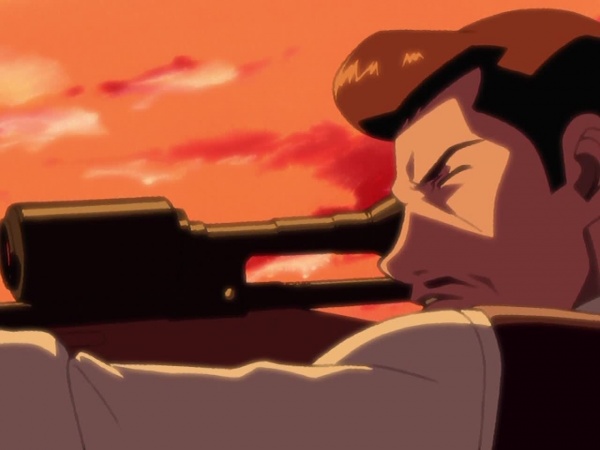 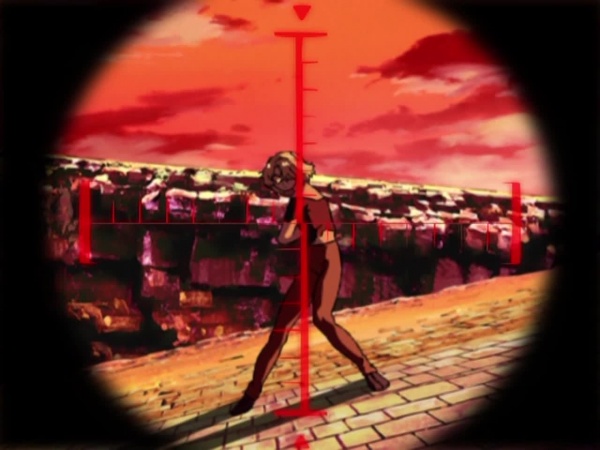 The crosshair-type reticle would most likely be anachronistic, since it was not used in the pre-World War II years. 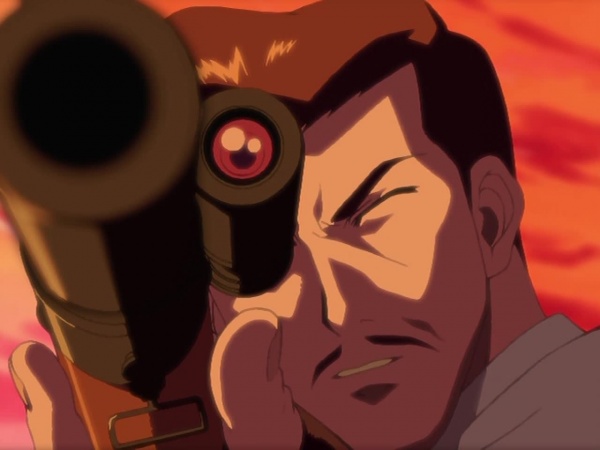 With a closer look, it appears that the scope's external features looks too anachronistic as well. 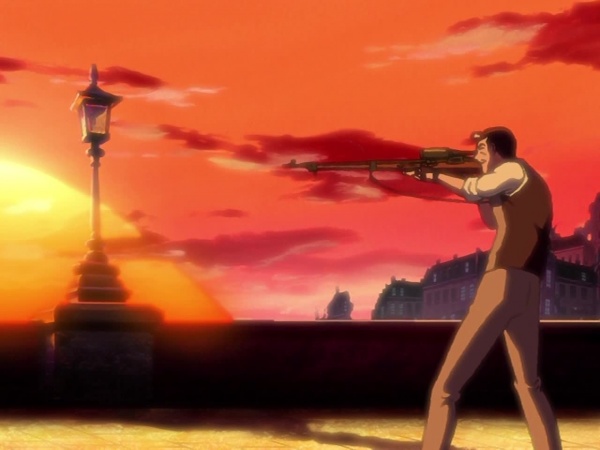 Ambassador Sakomizu fires the scoped rifle at a tired Lobelia.

The M72 LAW makes an anachronistic appearance in the "The Black Cat and the Bad Girl" at the hands of Paris Prefecture police officers as part of a plan launched by Isabel "Grand-Mère" Lilac to forcibly recruit Lobelia into the Groupe Fluer de Paris. 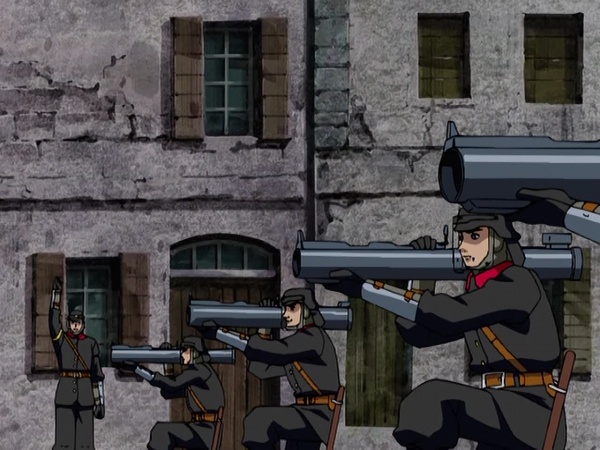 Paris Prefecture policemen in formation before they were given the order to fire tear gas-loaded missiles at Lobelia. 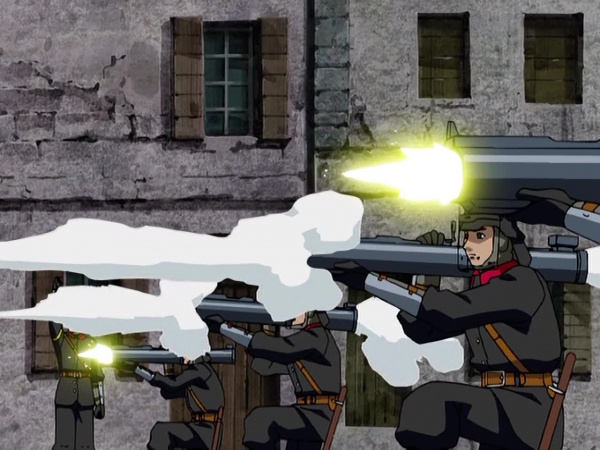 The anachronistic M72s as they are fired to launch tear gas missiles at Lobelia. Makes you wonder if someone from the future gave those rocket launchers to the Préfecture de police de Paris to assist the "Grand-Mère"...

Tear Gas Rifle Grenades were used by Paris Prefecture police officers in World War I-era gas masks and anti-heat resistant suits in the sewers of Paris in "The Black Cat and the Bad Girl". 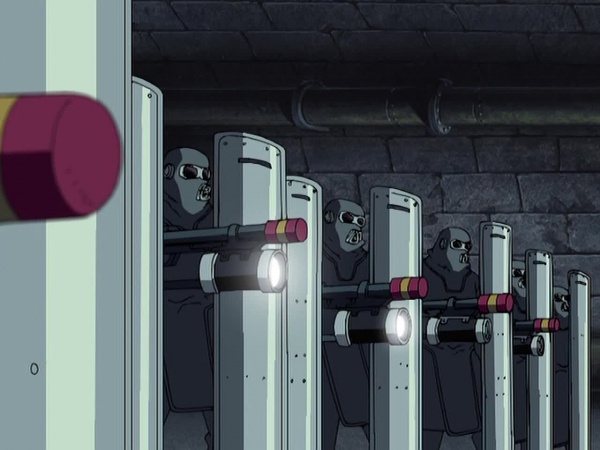 Hanabi Kitaoji is seen armed with a Yumi in "The City of Love". 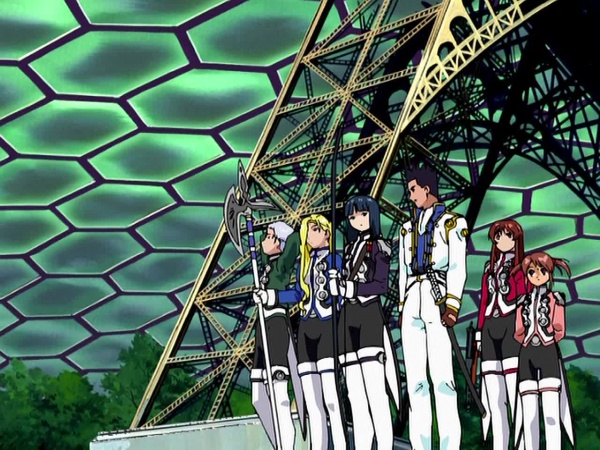 Hanabi armed with the Yumi while in her Kyudo gear. 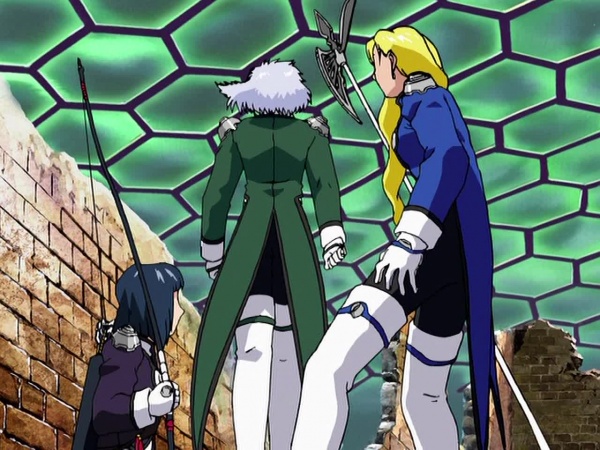 Taking cover with the Yumi in hand.