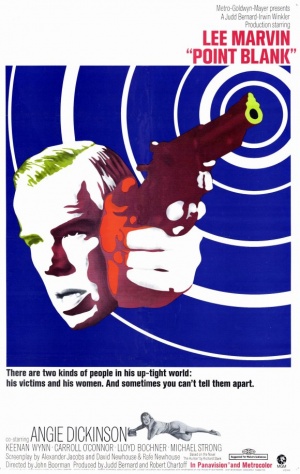 Point Blank is a 1967 crime thriller starring Lee Marvin as Walker, a thief who finds himself betrayed and left for dead by his partner in crime and his wife after a successful heist. Upon his recovery, he travels to Los Angeles in order to exact revenge. This film was an adaptation of the novel The Hunter which was written by Donald E. Westlake under the pseudonum of Richard Stark. The main character of the novel would also be used as the basis for several subsequent feature film adaptations, including 1992's Full Contact,1999's Payback, and 2013's Parker. The film's title also loosely inspired the title of the 1997 action/comedy Grosse Pointe Blank.

Mal shoots Walker after their heist.

Walker (Lee Marvin) uses a Smith & Wesson Model 29 with a 4" barrel throughout the film. On the DVD commentary the director John Boorman said Marvin faked the recoil when firing the .44 Magnum blanks at Lynne's bed although, when later firing live ammunition at Alcatraz, there was no recoil, prompting Marvin to tell Boorman that "Fiction overtakes reality". 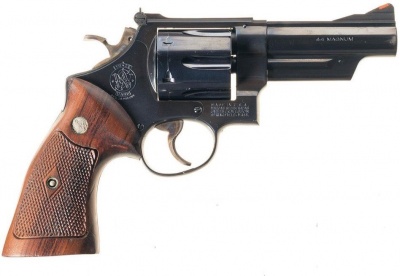 Walker breaks into Lynne's house with his Model 29 drawn.

Walker holds Lynne as he looks around her house with the Model 29.

Walker aims his Model 29 at Mal during his tryst with Chris.

Walker threatens Carter with his Model 29 before the storm drain rendezvous.

Walker places his Model 29 on Carter's corpse while searching his pockets.

One of Mal Reese's bodyguards carries a small pistol that appears to be a Walther PPK. Walker disposes of it.

With his Model 27 in his left hand, Walker picks up a bodyguard's revolver to toss it in the vent. The PPK sits next to it on the ground.

The assassin (James B. Sikking) hired by Carter uses a bolt-action sniper rifle resembling a Winchester Model 70 with a shortened barrel during the storm drain rendezvous.

The hitman aims his rifle at the target he believes to be Walker.

After taking out his second target at the storm drain, the hitman packs up his rifle.

Yost (Keenan Wynn) holds the casing ejected from the rifle that Walker presents to him. Yost mocks the size of the round but Walker assures him that an accurate marksman like the hitman can be deadly with any size round.

John Stegman (Michael Strong) drops a Smith & Wesson Model 10 Snubnose when he is shot at the storm drain. 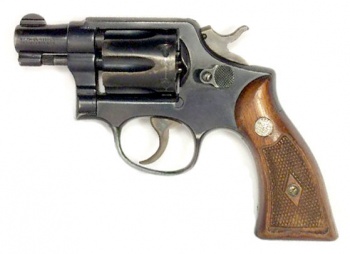 Stegman's Model 10 falls down the drain.