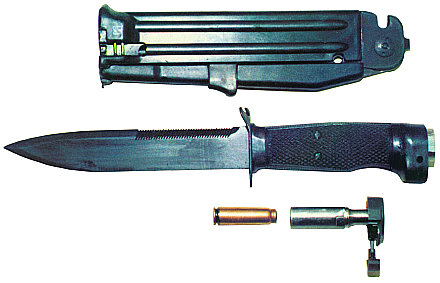 NRS-2 Scout Firing Knife, right side showing charging handle - 7.62x42mm SP-4. The push-button trigger is the drum-shaped silver part on the bulged base of the grip, with the safety directly above it.

The NRS-2 (Nozh Razvedchika Strelyaushiy (Нож Разведчика Стреляющий), "Scout Firing Knife") is a Soviet-era survival tool issued to Spetsnaz forces. The body of the weapon is a well-built survival knife with a serrated back that can be used as a saw (specifically designed for cutting detonator cord) on a high-carbon steel blade suitable for both utility and combat. The sheath also incorporates a wirecutter which can cut a 1/4 inch (5mm) thick cable and is insulated for up to 380 volts, and a flathead screwdriver blade.

The main oddity with this knife, and the reason it is here, was in the grip: the NRS knives contain a firing mechanism for a single captive piston 7.62mm SP-type silent pistol cartridge in a detachable assembly consisting of a breech and 2.36in (60mm) long barrel which is screwed into place and secured with a locking lever. The hammer is integrated into the grip and cocked by pulling back on a flip-up charging handle on the right-hand side: the safety and single-action push-button trigger mechanisms are at the base of the grip on the same side. Actually firing the cartridge is a somewhat unnerving proposition, as it requires that the user remove the sheath, flip the knife over so the bulge at the pommel is facing up, and point the blade of the weapon at their own face using fixed iron sights mounted on the guard and pommel. However, the light recoil means there is little actual probability of self-harm. Cartridge extraction is manual and performed with a U-shaped extraction tool incorporated into the end of the knife's guard not containing the rear iron sight. The device is effective out to around 27 yards (25m) and if the shooter messes that up the NRS is also balanced for throwing.

The original variant, the NRS, was first produced in the late 1970s: it fired the older SP-3 cartridge and has a full-length saw along the spine of the blade and a Bowie-style curved clip-point blade similar to the old NR-40 fighting knife issued during the Second World War. When the SP-3 cartridge was withdrawn from service, the NRS was redesigned as the NRS-2: as well as the new cartridge, the blade was redesigned to make it more effective as a weapon, switching to a drop-point blade more suited to stabbing through thick cloth and light body armour, and reducing the length of the saw so it would not snag when the knife was being used this way.

Both knives have a variant without the firing mechanism, the NR and NR-2: these still use the same grip design, but instead of a chamber have a compartment for stowing survival supplies in a similar way to the famed Spetsnatz UVSR survival machete. Neither NRS variant was commonly used, as units authorised to use the NRS and NRS-2 tended to also be authorised to use the very effective MSP and PSS silent pistols, and Spetsnatz troops tended to prefer the versions that didn't have guns in them.

The NRS-2 Scout Firing Knife and variants can be seen in the following films, television series, video games, and anime used by the following actors: