Mk 2 training grenade fitted with M1A2 22mm rifle grenade projection adapter. The WW2-era M1 adapter was similar in appearance, but had four claws instead of three, and did not have the conical stabilising cup at the base of the grenade. The pin needs to be pulled from the grenade before the M1 rifle grenade adapter is fired, something often forgotten in media depictions. The adapter then retains the grenade's spoon with an arming clip that separates due to inertia on launch: assembled M1 rifle grenades often had a block of wood under the spoon (as here) to hold the clip securely during transport.

The M7 Rifle Grenade Launcher (Remington T14 prior to adoption) was a muzzle device originally designed by John Garand and first adopted by the US military in 1943. In the modern sense it is a grenade adapter rather than a grenade launcher, as the device cannot actually launch anything by itself. It could be attached to the M1 Garand in order to allow it to fire 22mm rifle grenades using M2 or M3 grenade blank propelling cartridges. It was developed to solve the challenge of firing rifle grenades from a gas-operated semi-automatic rifle: prior to this, the solution had been for squad grenadiers to be issued with a bolt-action rifle, either an M1903A3 Springfield equipped with an M1 Rifle Grenade Launcher or more rarely an M1917 Enfield equipped with an M2 Rifle Grenade Launcher.

Fitting the original M7 turned the M1 Garand into a manually-operated repeater as long as it was mounted, since the assembly included a stud that depressed the valve of the rifle's gas cylinder lock screw to vent all of the gas that would normally cycle the action. This was intended to prevent serious damage to the gas system from the pressure of firing a 1.2 pound rifle grenade rather than a 0.02 pound bullet (original production M1 Garands with the B147428 solid lock screw do not have a hole large enough to even mount an M7, but those with reproduction solid screws that can fit an M5-series bayonet may explode if used with an M7), and prevent the rifle ejecting spent casings into the operator or trying to eat him when cycling next to his leg. Since this meant the launcher had to be constantly dismounted and re-mounted, they were frequently lost: period documents indicate that 15-20% of M7 launchers in inventory were being lost per month. In addition, it was not until January 1944 that the 7310079 "poppet" lock screw with a self-closing valve was standardised for the M1 Garand: prior to this, the user would have to fire off a round upon dismounting the M7 to close the B147851 lock screw valve via gas pressure. Only the postwar M7s, the M7A1 (1949), M7A2 (1951) and M7A3 (1953) allowed semi-automatic fire with the launcher mounted: these used the recoil from the grenade actually being launched to open the valve, and have pronounced ribs along their length rather than the indents of the wartime M7.

It could accept several grenade types (including four colors of parachute flare), but the most common were the M9A1 Rifle Grenade with a HEAT warhead, the M19 with a white phosphorous smoke / incendiary warhead, and the M17 Rifle Grenade with a fragmentation warhead. The latter was rendered obsolete when the M1 rifle grenade projection adapter was introduced in 1944, which could make any Mk 2 Hand Grenade (and later the M34 White Phosphorous grenade) capable of being fired from the M7 launcher, and could also be adapted to launch the warhead of a 60mm mortar shell. The M2 chemical grenade projection adapter was a similar device for smoke grenades, with a broader and longer "claw" for holding the cylindrical M16 or later M18 smoke grenade.

Since the 22mm rifle grenade socket size was standardised at the formation of NATO, the M7 can also launch many later grenade types such as the Mecar ENERGA anti-tank grenade, though due to issues of recoil force damaging the M7A1 and punching out the Garand's gas valve when used with the M7A2, this particular round was quickly limited to the M7A3. The M7A3 was also used to fire the later M31 HEAT rifle grenade from Garands that were still in service, before anti-tank rifle grenades were phased out in favour of the M72 LAW in the early 1960s.

While it is often thought that firing the M7 required the stock of the rifle to be rested on the ground, this is not strictly true: soldiers were taught two firing positions, one the aforementioned position aiming the rifle like a mortar, the second to hold the rifle with the stock under their arm for more direct fire. Shouldering the rifle when firing was unpleasant, due to the recoil one would expect from launching such a large projectile, but not impossible. There was one way to make it impossible, though: if extra range was needed there was a booster cartridge, the M7 Auxiliary Grenade Cartridge, nicknamed the "vitamin pill" by troops. This was roughly the size of a .45 ACP cartridge and could be placed in the muzzle of the grenade launcher facing the chamber before attaching the grenade, and would be ignited by the grenade blank, increasing muzzle velocity by about 50% and range to about 300 yards. It was strictly stated that the soldier should not fire the weapon from the shoulder while using one of these, and it was also stated that the M7 Auxiliary Grenade Cartridge should not be used with the M1 Carbine outside of emergencies as it was likely to destroy the Carbine's stock.

There was a companion sighting unit for the M7, the M15. This required two screw holes to be drilled into the left side of the parent rifle's stock alongside the receiver to accommodate a mounting disc to which the sight unit could be attached and detached as the soldier desired, but it was seldom issued. Another accessory issued with the M7 was a thick rubber recoil boot to prevent damage to the rifle's stock: while commonly issued, since rubber perishes over time these are very hard to find in good condition and so are unlikely to be present in live-action depictions (reproductions have only started to be made fairly recently). Most later NATO rifles featured a 22mm flash hider and built-in adjustable valve if they were gas-operated, allowing them to fire rifle grenades without any need for a special adapter.

The M7 Rifle Grenade Launcher and variants can be seen in the following films, television series, video games, and anime used by the following actors: 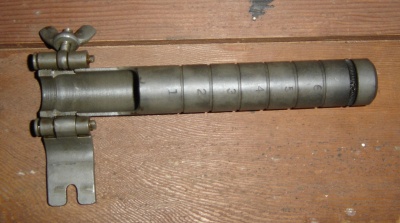 The M8 Rifle Grenade Launcher was a variant of the M7, used with the M1 Carbine.