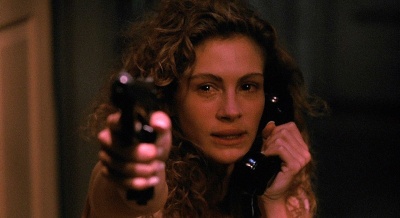 Julia Roberts holds a H&K P9S as Laura in Sleeping with the Enemy.

Julia Roberts is an American actress who is well known to movie audiences for her starring roles in numerous romantic comedies such as Pretty Woman and The Runaway Bride. She has since segued into more dramatic roles in films such as The Pelican Brief, Michael Collins and Erin Brockovich, a role for which she received an Academy Award for Best Actress. She also is the sister of actor Eric Roberts and the aunt of actress Emma Roberts.