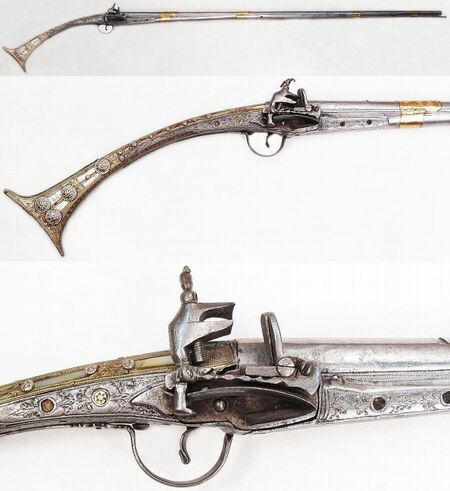 A Jezail is a type of long-barrel muzzle-loading musket made in Afghanistan. It is often incorrectly used as a blanket term for various muzzle loading long guns from the Middle East, North Africa, Asia and India. Since Jezails were made to order by individual craftsmen they are not standardised, having either matchlock or flintlock mechanisms and often using Brown Bess Flintlock Musket lockwork, and sometimes having rifled barrels, but are typically identified by their unusual horn-shaped stock. They were similar to American Frontier-era hunting rifles but were typically heavier and larger, with calibres in the .50-.75 range, and were used in a similar role to modern sniper rifles. Their heavy weight and long barrel led to a much greater effective range than standard infantry muskets, and they were used to fearsome effect by Afghan snipers during the Anglo-Afghan wars in the 19th century.

As with most antique weapons, Jezail muskets seen in live-action productions are quite likely to be modern replicas or non-functional props.

The Jezail Musket and variants can be seen in the following films, television series, video games, and anime used by the following actors: