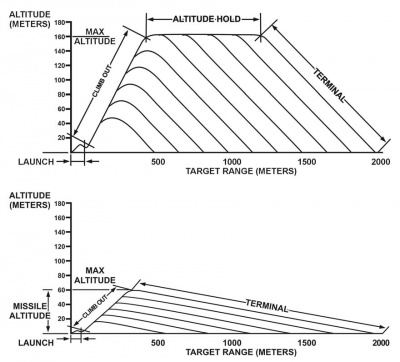 The FGM-148 Javelin is a crew-served, man-portable IR-guided fire-and-forget anti-tank missile in service with the United States military. It originated in the 1983 AAWS-M (Advanced Antitank Weapon System - Medium) requirement for an infantry guided missile system to replace the M47 Dragon, which was totally not an excuse to have a weapon program called "awesome." The first proof-of-principle weapons were produced in 1986, with three candidates: Ford Aerospace produced a LOSBR (line of sight beam riding) missile, Hughes Aircraft Missile System Group a wire-guided weapon using imaging infra-red combined with a fiber-optic cable link (presumably an ACLOS (automatic command line of sight) system where the operator would only have to keep the target within the imager's field of view after locking on rather than directly designating it), and Texas Instruments a wireless fire-and-forget missile using imaging infra-red. The latter weapon is what would ultimately become the Javelin, being produced by Texas Instruments and Martin Marietta, now respectively parts of Raytheon and Lockheed-Martin. The system entered production in 1996.

Like Dragon, Javelin is a two-part system consisting of individual missiles in disposable casings (the Launch Tube Assembly or LTA, which includes the Battery Coolant Unit (BCU) which provides a four-minute supply of power for the missile electronics and coolant for the missile seeker once activated: the missile must be fired within this window once the BCU is activated) and a detachable sighting unit with an independent power supply (the Command Launch Unit or CLU) which is re-used, being mated to the LTA prior to launching. Javelin's CLU includes all controls for the missile, a day / night sighting unit with a built-in electronic cooling unit powered by a replaceable battery, and the fire control computer. The missile is locked on to the IR image of the target by aiming the CLU, with guidance fully automated after launching using image tracking: the stated effective range is 2,500m (1.55 miles) (original Block 0 missiles had a stated effective range of 2,000m (1.24 miles)), but Javelin has scored hits at up to 4,750m (2.95 miles) during testing. Minimum range is 150m (492ft) in top-attack mode and 65m (213ft) in direct mode. The CLU can also be used as a portable surveillance system when dismounted.

Javelin's usual missile is an advanced tandem-charge HEAT warhead designed to defeat modern reactive armor, which can be set to top-attack mode for targeting armored vehicles or direct-fire for engaging other targets such as helicopters. Both trajectories begin with a steep climb, with only height of the climb (maximum of 160m (525ft) for top-attack and 60m (197ft) for direct) and trajectory of the end stage differing. The missile uses a soft-launch system with a small booster charge that burns out while the missile is still inside the LTA, the main thruster then firing when the missile is a safe distance from the launcher and accelerating it to full speed before it too burns out, the missile gliding for the remainder of its flight time. Since Javelin saw extensive use against unarmored targets in Iraq and Afghanistan, a second missile type, the multi-purpose warhead (MPWH) has been developed, which retains the HEAT functionality but also has a steel fragmentation sleeve to increase lethality against infantry.

Two variants of the CLU currently exist: the Block 0 version (M98A1) is as shown above, while the Block 1 version (M98A2) has additional foam shock absorbers and a larger main camera, and uses a digital video output with the original CLU's warning lights mostly integrated into the display. A new lightweight CLU began development in 2013: it is 70% smaller, 40% lighter, and has a 50% improvement in battery life, along with numerous upgrades to electronics such as a high-definition display, long-wave IR sensor, a Far Target Location (FTL) system, and an integrated laser rangefinder / target designator and 5 megapixel camera. First deliveries of this new CLU are expected in September 2019. LTA units are manufactured by Orbital ATK, while CLUs are manufactured by Raytheon.

The FGM-148 Javelin and variants can be seen in the following films, television series, video games, and anime used by the following actors:

Considering the extremely short range most video game maps are, "shown firing at impossibly short range" and "incorrect trajectory" are pretty much a given.