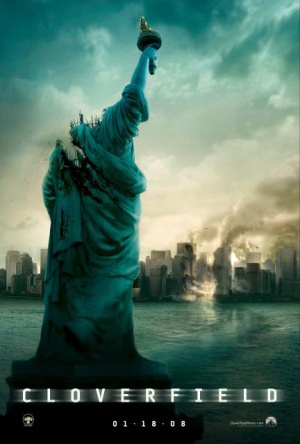 Cloverfield is a 2008 science fiction "monster" film directed by Matt Reeves (Dawn of the Planet of the Apes) and written by Drew Goddard (the director of The Cabin in the Woods). The film's producer J.J. Abrams assisted in making the production more of a 'stealth' motion picture, that relied more on the mystery of the project and hype to create buzz and interest rather than a traditional marketing campaign. The 2008 film mounted one of the most successful 'mystery' campaigns for a motion picture in recent history (save for the Blair Witch phenomenon of 1999). So intent were the filmmakers on maintaining the 'secret' of the movie, that its working title changed many times, sometimes to 'wacky and unlikely' titles (including the title of just its intended release date: "01-18-08"). Two films tied into the "Cloverfield" universe were subsequently released: 2016's 10 Cloverfield Lane and 2018's The Cloverfield Paradox, a Netflix original film. Tagruato and its subsidiaries share elements with the original film, and J.J. Abrams has stated he intends to produce another film to tie these elements together.

Per the "Making of Cloverfield" documentary seen on the DVD, only a few of the filming days were done in the film's actual setting, New York City. The vast majority of the film was done in Southern California, as many Los Angeles streets, abandoned factories and studio backlots were enlisted to impersonate the Big Apple. Most notably, any scenes with armored vehicles and live firing guns were filmed in California and NOT New York (as weapons laws prove to be much more restrictive in that city). Such weapons restrictions pretty much guaranteed that any film based in New York will actually film on location there as little as possible if weapons are important to the story.

The following weapons were used in the film Cloverfield:

(NOTE: Because of this movie's first-person POV filming technique, most of the weapons appearing in the film are not seen clearly or in detail, as in other motion pictures. Behind-the-scenes footage from the DVD is used for some of the guns.)

M16A2 assault rifles are used by the US Army in the first engagement with "Clover" that is taped by Hud, and throughout the film. These rifles could be M16A2 uppers on A1 lowers. However many seem to be firing 3 round bursts in rapid succession, so they could be M16A2s. Some of the M16A2s in this movie are ISS's flashbulb "non guns", and can be discerned by their oversized flash hiders in the first battle. 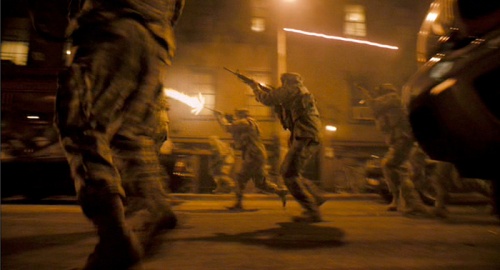 The US Army charges the Cloverfield Monster with M16A2 rifles.

In the military medical station (in the department store) a clearer shot of the M16A2 rifles can be seen. 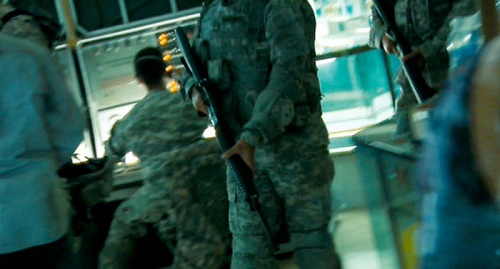 The US Army walking with M16A2 rifles. 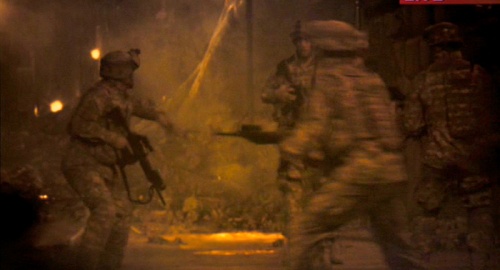 When first encountering the giant 'ticks' that fall off the monster, soldiers (in this television news segment) fight them off with M4A1 carbines with carry handles attached. 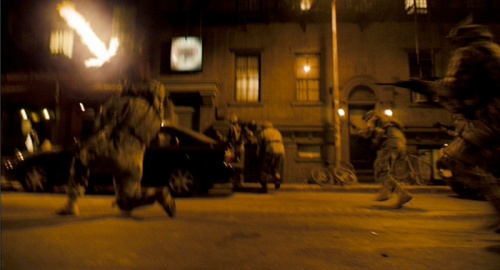 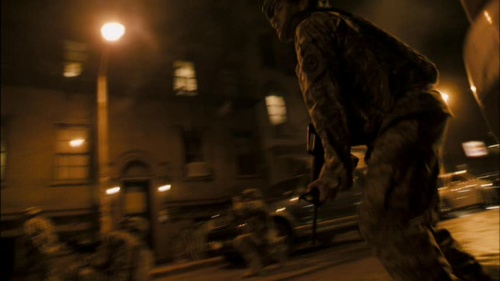 Closeup shot of a US Army preparing to engage "Clover".

As can be seen above, many of the M4A1s seen in the film have the carry handles attached to the flat top receivers and scopes mounted on the top. 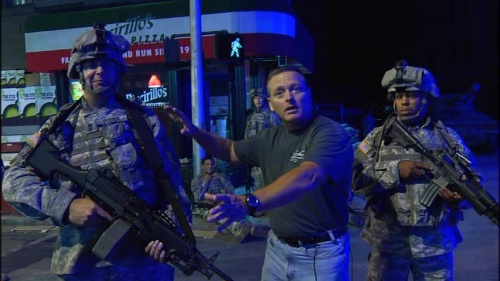 A behind-the-scenes image of the film's Military Adviser, Tom Minder, posing with two actors playing US Army GIs. The one on the left has an M249 SAW, while the other has an M4A1 Carbine. The "blue-ish" cast on the actor's left side is cast off from a giant "blue screen" put underneath an overpass, to facilitate the digital "insertion" of New York City and other destruction. Also note the FV433 Abbot SPG used in the film parked in the background on the right.

Apparently, some of the soldiers in the film use the M249 Squad Automatic Weapon (SAW). I did not see these guns, but behind-the-scenes footage from the DVD special features confirms the apparent use of this weapon by the actors playing the troops. I will look closely at the film again to see if this weapon is visible.

A behind-the-scenes image of the film's Military Advisor, Tom Minder, posing with two actors playing American soldiers. The one on the left has an M249 SAW, while the other has an M4A1 Carbine.

FGM-148 Javelin anti-tank missile launchers are used by the US Army in the first engagement with the monster that is taped by Hud. 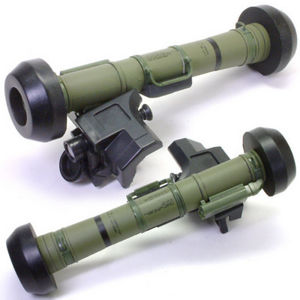 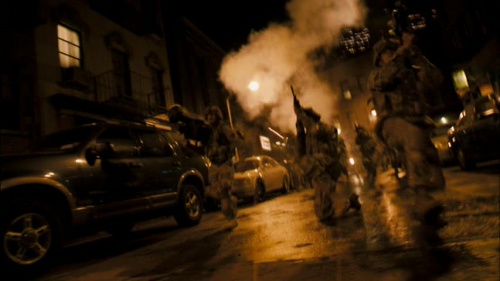 US soldiers firing upon "Clover"; the one on the left clearly has an FGM-148 Javelin, which he has just fired. 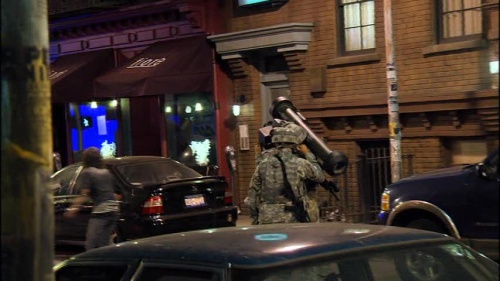 Behind-the-scenes footage of the soldier firing the Javelin at "Clover". This was done on the New York City set on the Warner Brothers Backlot, a street scene that has been seen in many motion pictures.

.50-caliber Browning M2 heavy machine guns are seen mounted on the U.S. Army Humvees. They are also seen mounted on the "M109" self-propelled guns and "M1 Abrams" tanks in the movie (the former being British FV433 Abbots standing in for the M109, and the latter being visually modified British Chieftain tanks - both rented from Army Trucks, Inc.) 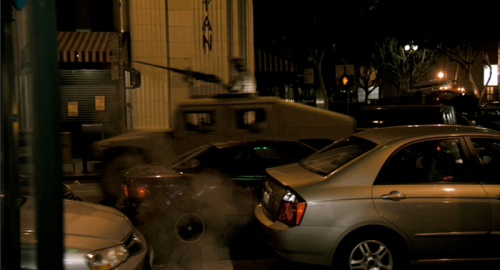 Most of the shots of the Humvees with M2s are blurry, due to the fact that they are always rushing by the camera. 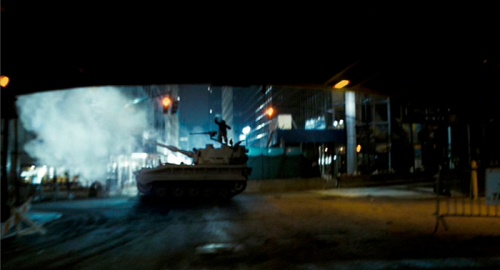 A gunner tries to flee his "M109" before it is destroyed by the monster's foot. The M2 is clearly visible on the turret. 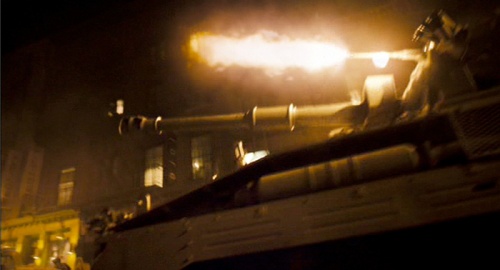 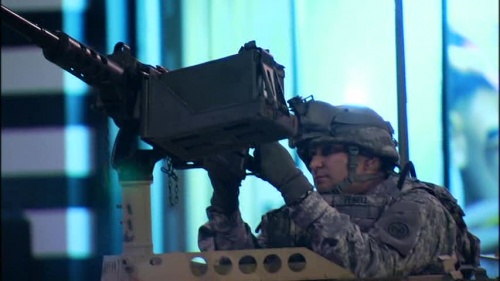 A behind-the-scenes image of an actor playing a National Guard machine gunner in a Humvee, sitting behind the M2.

M136 AT4 84mm rockets are used by the US Army in the first engagement with the monster that is taped by Hud. 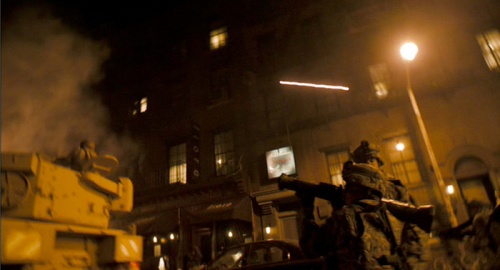 A GI fires an AT4 at the monster.
Retrieved from "https://www.imfdb.org/index.php?title=Cloverfield&oldid=1488888"
Categories: