Dr. Strangelove or: How I Learned to Stop Worrying and Love the Bomb

Dr. Strangelove or: How I Learned to Stop Worrying and Love the Bomb (usually shortened to Dr. Strangelove) is a 1964 military satire directed by Stanley Kubrick (Full Metal Jacket) and stars Peter Sellers in three distinctive roles. In the film, mentally unstable US Air Force General Jack D. Ripper (Sterling Hayden) decides to launch a preemptive nuclear strike on Russia to protect the "precious bodily fluids" of America: following the revelation that this strike will trigger a new Soviet "Doomsday device," the President of the United States and his council struggle to stop it. The film's cast also included George C. Scott, Keenan Wynn, and Slim Pickens as well as James Earl Jones in an early role.

The following weapons were used in the film Dr. Strangelove or: How I Learned to Stop Worrying and Love the Bomb:

An older M1911 pistol is among the contents found in the survival kit of the B-52 bomber crew, which includes USAF Major Kong (Slim Pickens) and USAF Lieutenant Lothar Zogg (James Earl Jones). Also an M1911 with pearl grips is used by Gen. Ripper to threaten Group Captain Lionel Mandrake (Peter Sellers). 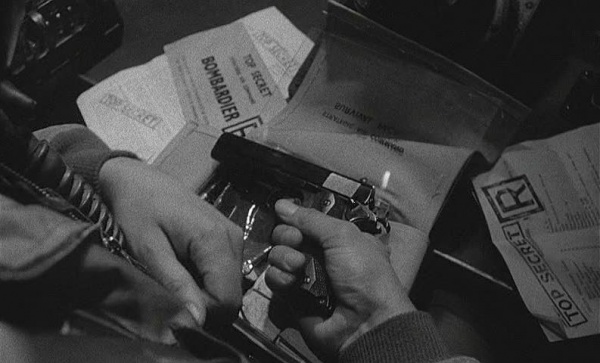 The M1911 is taken out of the Survival Kit issued to the B-52 crew as Major Kong reads off the contents, including several comical-sounding but accurate items like nylon stockings and lipstick which were intended for trading with locals if the crew had to bail out over enemy territory. Of note is at the end of the sequence Kong says "shoot, a fella could have a good weekend in Vegas with all that stuff," but his mouth sounds out "Dallas." The line was dubbed over after the Kennedy assassination occurred during production. 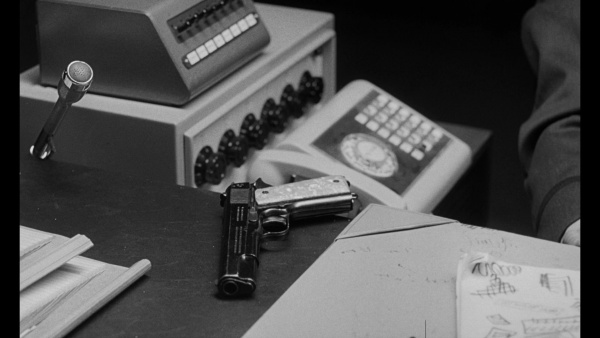 In an alternative ending, involving a massive pie fight in the "war room", Dr. Strangelove is armed with a Luger P08. 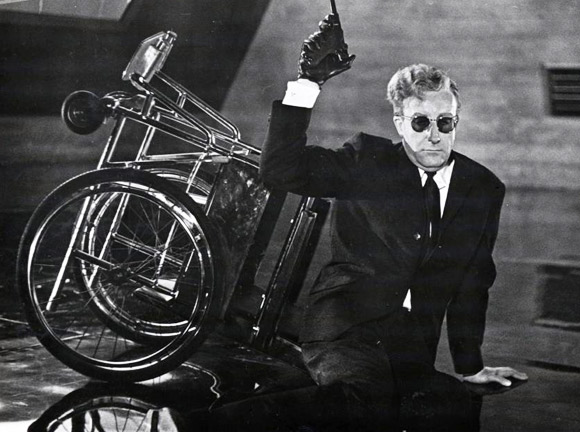 The M3A1 "Grease Gun" is used by both the US Air Force Security Police defending Ripper's Air Force base as well as the US Army airborne unit that is seen assaulting it. 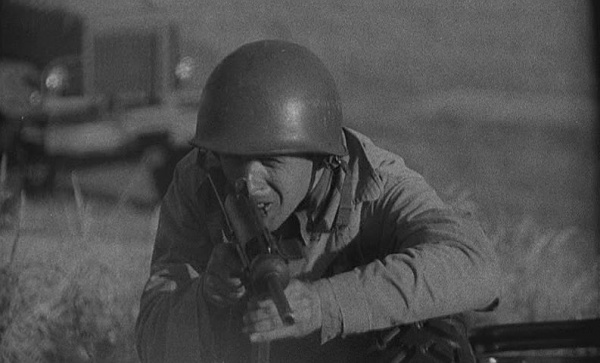 The M3A1 "Grease Gun" is used by USAF Security Police defending the airbase.

Oddly, some of the US Army soldiers attacking Ripper's Air Force base can be seen carrying and firing German MP40s. 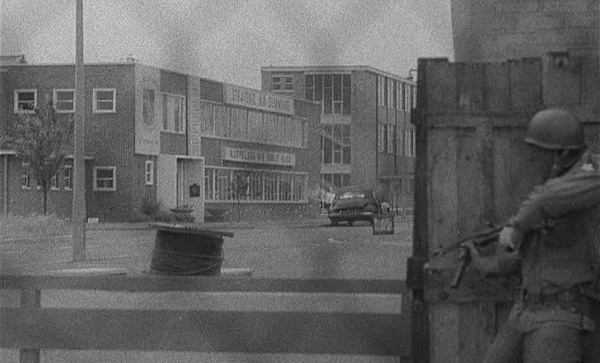 A soldier wielding an MP40 fires at General Ripper's base. The weapon was likely used due to its resemblance to the M3 Grease Gun.

World War Two Era M1 Carbine, with Dark Walnut Stock, 'L' peep sight and no bayonet lug - correct for most of WWII, shown with khaki sling and oiler and a period Magazine pouch for buttstock 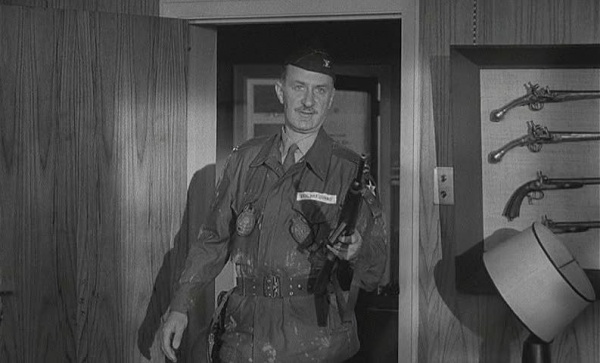 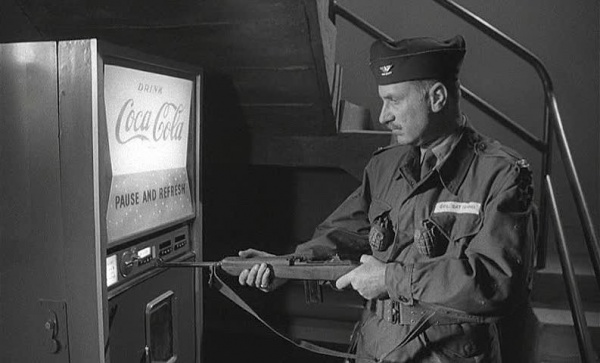 "You're gonna have to answer to the Coca-Cola Company".
Colonel Bat Guano (Keenan Wynn) uses his M1 Carbine on the soda machine.

The M1 Garand is also used by the US forces assaulting the airbase. 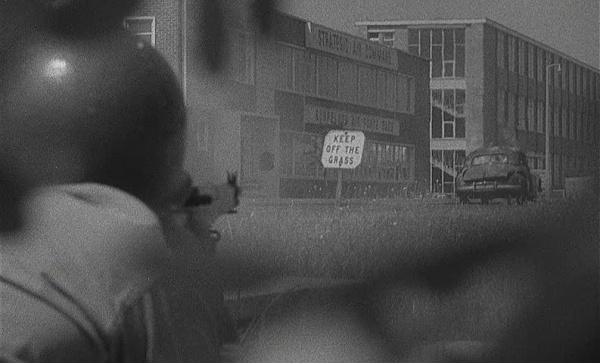 A US soldier fires on the SAC headquarters with his M1 Garand.

A Browning M1919A4 machine gun is notoriously seen wielded by USAF Gen. Jack D. Ripper (Sterling Hayden). The weapon was carried in his golf bag and he uses it handheld to repel the Army forces sent to retake the air base. US Army troops that assault the airbase use the M1919 but with a tripod. 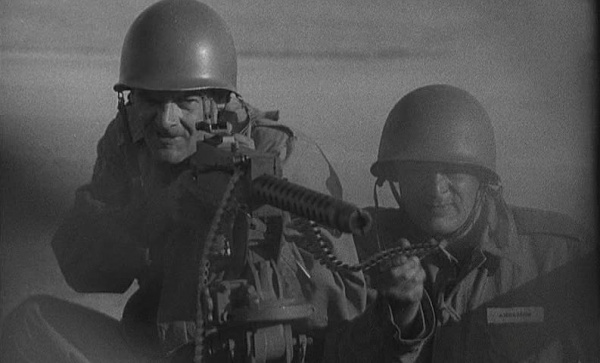 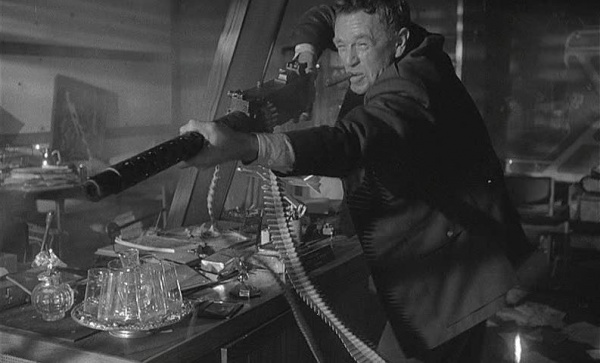 General Ripper uses the M1919A4 to protect his bodily fluids from the commies. Note that in real life, holding the weapon in that way, with one hand unprotected on the barrel, would cause severe burns.

Several Flintlock Pistols and Howdah Pistols are displayed on the walls of Gen. Ripper's office. 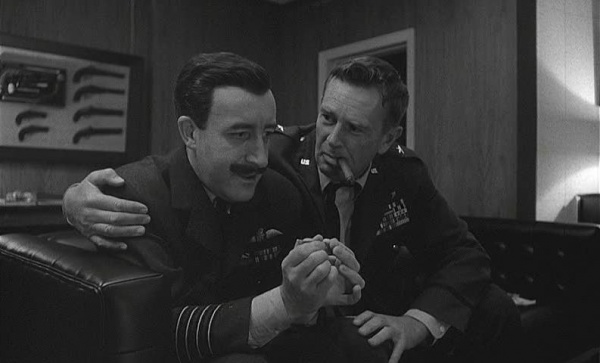 The bottom two pistols appear to be Howdah Pistols.