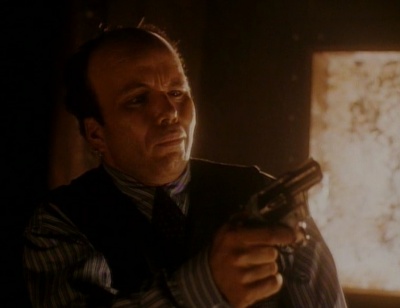 Clint Howard with an 3rd Gen Colt Detective Special as Bobo in Dillinger and Capone.

Clint Howard is an American actor who is the son of actors Rance Howard and Jean Speegle Howard, the brother of actor/director Ron Howard, and the uncle of actress Bryce Dallas Howard. Clint began his acting career as a toddler, appearing in several episodes of his brother Ron's television series The Andy Griffith Show. He would later gain early fame for his role opposite an adult bear in the 1960's series Gentle Ben. Since then, Clint has never stopped working, appearing in over two hundred films including several directed by his brother, including Apollo 13, Backdraft, Splash, Far and Away and The Paper.