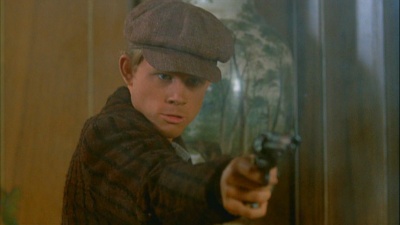 Ron Howard holds a Great Western revolver in The Shootist (1976).

Ron Howard is an American actor/director who is best known onscreen for his roles as Richie Cunningham on the series Happy Days and Opie Taylor on The Andy Griffith Show. As a director, he has helmed several acclaimed films, including A Beautiful Mind, for which he received the Academy Award for Best Director. In addition, Ron is a part of a multi-generational family of actors, which includes his parents Rance Howard and Jean Speegle Howard, his brother Clint Howard and his daughter Bryce Dallas Howard.

Please visit here for the films in the IMFDB directed by Ron Howard.