The following weapons were used in the film Blade:

Mercury (Arly Jover) fires at Blade with a Beretta 92FS during the bloodbath rave.

A hospital security guard on the left with a Beretta 92FS.

Officer Krieger pulls a Beretta 92FS Compact on Karen Jenson in an attempt to kill her before he is swiftly disarmed by Blade. 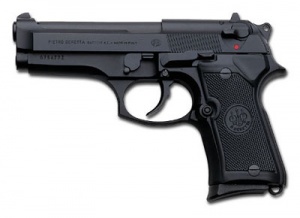 Officer Krieger recoiling after being sprayed with vampire mace.

Officer Krieger (Kevin Patrick Walls) holds the Beretta as Blade appears behind him.

Blade (Wesley Snipes) hands a Glock 26 loaded with silver hollow point bullets to Karen (N'Bushe Wright) to defend herself. She also uses this gun at another point in the film to shoot at one of the familiars Deacon Frost (Stephen Dorff) sends just before she and Whistler (Kris Kristofferson) are captured.

When Blade (Wesley Snipes) goes to the hospital to finish off Quinn (Donal Logue), several hospital security guards fire at him, one having a Smith & Wesson Model 686. A police officer also appears to be armed with the revolver.

A hospital security guard on the right with the S&W 686.

Several cops at the hospital are armed with Smith & Wesson Model 10 revolvers.

Several cops are armed with the Smith & Wesson Model 10. 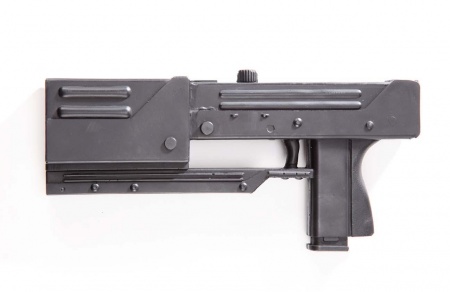 Blade fires his Modified MAC-11 during the club shootout.

Blade fires his Modified MAC-11 in a metro tunnel.

Blade hands his MAC-11 to Whistler.

Blade opens up with his MAC-11 on some Familiars near the end of the film. Presumably he has more than one of these weapons, because he never retrieved the one he left with Whistler.

The vampire DJ at the Bloodbath Rave fires at Blade with a MAC-10 before he is taken down.

The vampire DJ lets loose with a MAC-10.

One of the familiars in the library is seen armed with a Sterling L2A3 submachine gun. Another familiar is seen firing a Sterling L2A3 at Blade, Whistler and Karen Jenson when they made their escape from the vampire library.

Though it may be hard to make out, there is a Sterling SMG in there.

The Kimel AP-9 is wielded by several of Frosts's Familiars.

A Familiar wields an AP-9.

In several scenes, some vampires and familiars can be seen armed with Intratec TEC-DC9s. 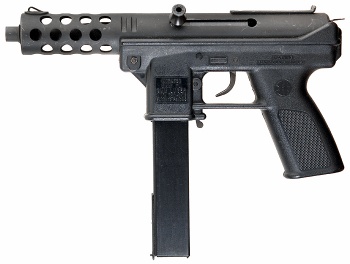 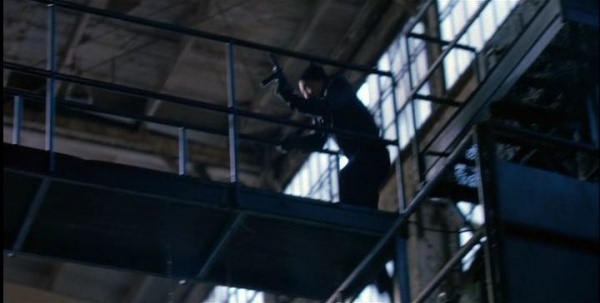 The "familiar" running on this railing has an TEC-DC9.

A vampire with a TEC-DC9.

One of the familiars that Whistler (Kris Kristofferson) mows downs in the library can be seen holding a Beretta M12 sub-machine gun as he falls. 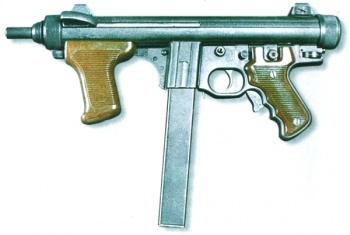 A familiar dies while holding his Beretta M12.

In several scenes, the vampires and familiars can be seen carrying full size Uzis.

A familiar dies holding an Uzi.

A "familiar" (human working for the vampires) armed with an Uzi.

After Blade escapes the library a familiar can be seen with a Smith & Wesson M76 very briefly.

A Familiar can be seen armed with an IMI Mini Uzi.

On the far left, a Familiar armed with an IMI Mini Uzi.

A familiar can be seen armed with an IMI Micro Uzi at Frost's penthouse before being taken down.

A Familiar with a IMI Micro Uzi.

One of the familiars that Blade (Wesley Snipes) fights before meeting his mother, Vanessa Brooks (Sanaa Lathan) is armed with a Heckler & Koch SP89. 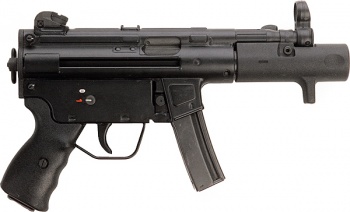 A familiar armed with a Heckler & Koch SP89.

Towards the end of the film, several vampires and familiars can be seen armed with the Heckler & Koch MP5K-PDW.

On the near left, a Familiar with the Heckler & Koch MP5K-PDW.

A Familiar with a Heckler & Koch MP5K-PDW.

A Familiar armed with a Heckler & Koch MP5K-PDW.

A vampire can be seen very briefly with a Heckler & Koch MP5A3 in the temple.

Vampire to the right is armed with a Heckler & Koch MP5A3.

Vampire with a Heckler & Koch MP5A3.

When Whistler (Kris Kristofferson) rescues Blade (Wesley Snipes), and Karen (N'Bushe Wright) in the vampire library, he is seen using an Heckler & Koch MP5SD3 to mow down several familiars. The muzzle flash seen here is impossibly large and bright for a suppressed weapon; it's the result of using a mock suppressor can, combined with full-flash motion picture blanks.

"Catch you fuckers at a bad time?" Whistler opens up with his H&K MP5SD3. The muzzle flash seen here is impossibly large and bright for a suppressed weapon; it's the result of using a mock suppressor combined with full-flash motion picture blanks.

One of the Familiars that Whistler (Kris Kristofferson) mows downs in the library can be seen armed with a Colt 9mm Submachine Gun (RO635).

The muzzle flash of a Colt 9mm Submachine Gun can be seen.

When Blade (Wesley Snipes) escapes the hospital with Karen Jenson (N'Bushe Wright), a SWAT officer fires at him from a window with a Heckler & Koch HK33 with 30-round magazine, but misses. Several vampires are also seen wielding these weapons.

Heckler & Koch HK33A2 Select Fire rifle with Factory 40rd Magazine - 5.56x45mm. The original magazines available for the HK33 were only the 25-round and the 40-round. The 30-round curved magazine was developed during the introduction of the Civilian HK93 rifle and was provided for that rifle.

A SWAT officer opens up with a Heckler & Koch HK33. Note the 30-round magazine.

The shotgun that Blade (Wesley Snipes) uses in the film is a Benelli M3 Super 90 with a pistol grip, modified to fire silver stakes, as well as normal ammunition.

Blade takes out Racquel (Traci Lords) with his Benelli M3.

Blade takes out some Familiars with his Benelli M3.

The bartender at the karaoke club tries to pull a stainless Remington 870 with a short barrel and a pistol grip on Blade.

Bartender with the Remington 870.

Whistler can be seen using a Mossberg 590 Mariner to fire at several vampires and Familiars running around the lair.

Whistler fires a Mossberg 590 Mariner at several vampires and Familiars running around the lair.

Several vampires can be seen with Mossberg 590s towards the end of the film, theirs are equipped with pistol grips, one of which Karen commandeers and uses.

Karen with the Mossberg 590.

Karen firing her Mossberg 590 at Mercury.

In Blade's hideout, a large amount of firearms are seen including an HK91, his Benelli shotgun, and several pistols.