Beneath the Planet of the Apes

The following weapons were used in the film Beneath the Planet of the Apes: 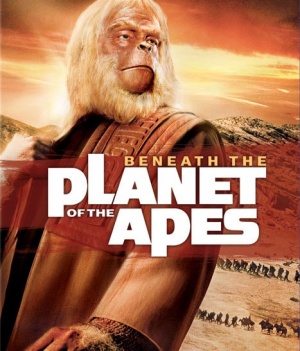 Blu Ray cover for Beneath the Planet of the Apes 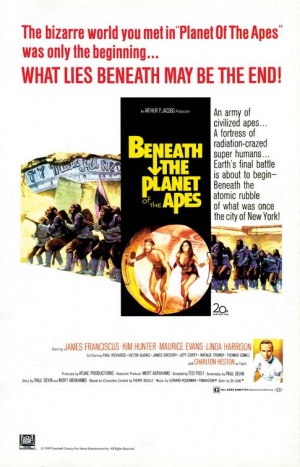 As in the original Planet of the Apes, the main rifle used in the film is a visually modified M1 Carbine. This time, the wood casing was not painted black and for some scenes a bayonet was attached. Both Taylor (Charlton Heston) and Brent (James Franciscus) are seen using the rifle. For the background extras, wooden replicas were used.

The Apes engage in bayonet training.

The apes smash the mutant statues.

The gorillas fire their rifles.

An Ape SMG was added to the Apes' arsenal of weapons for the film. It is seen in the hands of several Gorillas, most prominently in General Ursus (James Gregory) hands in the final scene. The Ape SMG appears to be a modified Madsen M50. Like the modified M1 Carbines, the Madsen is concealed in a wooden case.

Prop of the Ape SMG

The Gorilla soldier on the right with an Apes SMG.

General Ursus (James Gregory) opens up with his submachine gun.

The Gorilla soldier in the middle has an Apes SMG.

In addition to the Ape SMG, an Ape Handgun was introduced in the film. One suspecting Gorilla chases Brent and Nova into the woods until firing a couple warning shots. It is later seen in the hands of General Ursus (James Gregory). The handgun appears to be a modified Smith & Wesson Model 32. 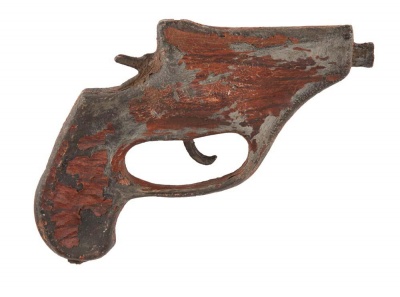 Actual prop of the Ape Handgun used by James Gregory in the film. 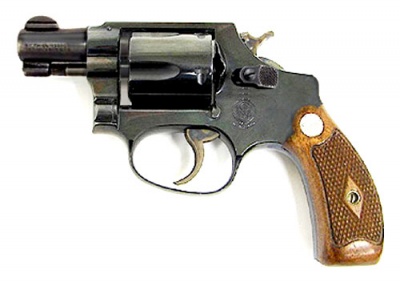 A Gorilla with the Ape Handgun.