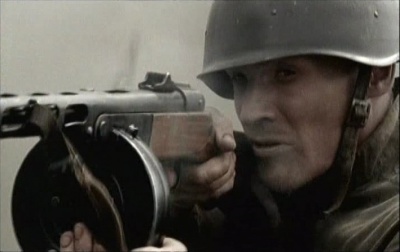 Aleksey Serebryakov holds a PPSh-41 as Vasilii Tverdokhlebov in The Penal Battalion (2004).

Aleksei Valeryevich Serebryakov (Алексей Валерьевич Серебряков; born 3 June 1964) is a well known Soviet/Russian and Canadian stage and film actor. He has appeared in more than 100 movies and TV series since 1978. In 2012, Alexey Serebryakov emigrated to Canada, and lost Russian citizenship in 2014.