Battle After the Victory (Boy posle pobedy), The

From Internet Movie Firearms Database - Guns in Movies, TV and Video Games
(Redirected from The Battle After the Victory (Boy posle pobedy))
Jump to: navigation, search

The Battle After the Victory (Boy posle pobedy) is a Soviet 1972 two-part B&W spy movie directed by Villen Azarov and based on the novel by Vasili Ardamatsky. It is the third movie of the trilogy, preceded by Way into "Saturn" (Put v "Saturn") (1967) and The End of "Saturn" (Konets "Saturna") (1968). War is over, but the survivors of "Saturn", including Krylov-Kramer and Wilhelmy, join newly established Gehlen Organization. The Soviet agent continues his work and, overcoming numerous dangers, at last returns home.

The following weapons were used in the film The Battle After the Victory (Boy posle pobedy):

A Luger P08 are seen in holster of Krylov-Kramer (Mikhail Volkov).

Kramer (at the right) carries a Luger (a typical grip can be seen) in TT holster.

A pistol is seen in Wilhelmy's holster. The grip matches a P38 while the holster is for TT-33.

Gehlen hands a Walther PP to Wilhelmy: "It's the only form of retirement".

Wilhelmy refuses to commit suicide and returns the pistol to Gehlen.

Gehlen with the Walther PP.

Wilhelmy holds a pistol in another scene.

Kramer puts his pistol on the table.

A grip of TT is seen in Vinnikov's holster.

A soldier at the background carries a pistol in M1916 holster.

Two soldiers at the right carry M1911s in holsters.

The pistol in hand of is seen partially.

German soldiers carry MP40 SMGs in opening scenes. Later MP40s are used by the personnel of Volkspolizei (German People's Police) during the shootout with saboteurs of Gehlen Organization.

What appears to be a PPSh-41 is seen inside the pillbox during the shootout of saboteurs of Gehlen Organization with Volkspolizei.

The firing barrel inside the pillbox is definitly of PPSh.

US Army soldiers and military policemen are armed with Thompson M1928A1 SMGs.

A soldier, guarding the camp for German POWs, carries a Thompson.

A soldier with a Thompson is seen at the background.

An MP carries a Thompson. Note that it has a genuine magazine, not a converted MP40 magazine as it is with many Thompsons in Soviet movies.

A German soldier carries a rifle, that appears to be a Karabiner 98k.

A soldier carries a rifle.

Several long guns are seen on the wall of a hunting lodge in Bavarian Alps. The gun at the right appears to be a military style musket, next to it is a Oriental style musket, and two guns at the left are some long barrel hunting guns (muskets, rifles or shotguns). 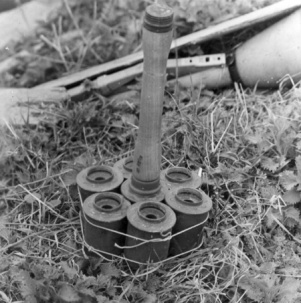 Col. Vinnikov holds a bundle of grenades. Unlike standard "Geballte Ladung", it consists only of three grenades.

A BTR-152 stands for a German half-track APC.
Retrieved from "http://www.imfdb.org/index.php?title=Battle_After_the_Victory_(Boy_posle_pobedy),_The&oldid=1327121"
Categories: