Steyr STG 77 SA. This was a limited production model for the AUG's 40th anniversary. The scope of this model is detachable from the upper receiver, resulting in a smaller hole in between. - 5.56x45mm NATO 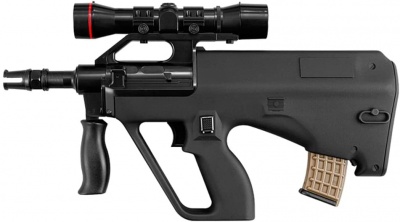 There is a major problem on this page. The AUG-A2 is not only different because of its capability to mount a Picatinny scope rail in place of the integrated scope. It also varies in a minor detail concerning its charging handle. On the A1, the handle was permenantly fixed at an angle, and in the A2 it could be folded to lie alongside the receiver. A scope rail is nothing new, as the AUG had the option of mounting a NATO-standard sighting mount since it was introduced (as the AUG-T), the A2 just introduced an easier method of mounting. This really needs to be rectified. I am willing to do it but I would like to hear some confirmation before I change this. Additionally, the AUG-A2 is also available with the integrated rifle scope. See Steyr-Mannlicher's website: www.Steyr-Mannlicher.com.SAWGunner89 15:40, 12 December 2009 (UTC)

also on another note the ADF has started using new F88's pretty much everything that was black is now a greenish tan and new sights that look similar to the A3's sights. scarecrow 00:58, 9 October 2010 (UTC)

Why do alot of people hate the Steyr AUG and nearly every other bullpup rifle out there?

Seriously, it seems like most people that I talk to love to hate bullpup rifles like the Steyr AUG. Why do bullpups get so much hate anyway? They are just as good as any other standard assault rifle, even though they are designed differently and have a different look, they can still pack the same punch that your standard M-16 or AK-47 rifle can. Yet there are all these fan-brats of those other assault rifles who just love to hate on bullpups and will come up with some rather stupid and over the top reasons to hate on them such as; "OMG! Ur a Counter-Strike noob cuz u liek teh FAMAS!", if you say you like bullpup rifles to them. --ThatoneguyJosh 22:17, 3 June 2011 (CDT)

Maybe these haters are left-handed people who don't like hot brass flying into their face. I think there are only two or three bullpup designs that are truly ambidextrous, some can be converted, while some just force lefties to shoot right-handed. --Funkychinaman 09:52, 4 June 2011 (CDT)

The AUG, FAMAS, and F2000 are fully ambidextrous, the AUG and FAMAS can have they're ejection ports flipped to the right side for left handed users, the FN F2000 doesn't need to since its ejection port is in front of the hand guard. I'm designing a bullpup assault rifle right now, I deem it the most practical futuristic assault rifle ever made. The weapon length to range ratio Is what I like most about bullpup designs. - Mr. Wolf 11:25, 4 June 2011 (CDT)

Well Funkychinaman, most of the haters of bullpup rifles that I encounter usually hate on bullpups on the grounds that they are 'ugly-looking guns' and that they 'feel odd when handled', while others hate bullpups on the grounds of the manufacturing and materials that they are built with (Rarely do I ever hear about the 'reliability' argument). But just because some bullpups are built using high-grade plastics doesn't mean they are inferior to the aircraft-grade metal that other standard assault rifles are built from. --ThatoneguyJosh 03:05, 9 June 2011 (CDT)

Yes, the Tavor TAR-21 is also ambidextrous, it has a flippable ejection port just like the the AUG, I think it's a cool gun too. Firearm manufacturers aren't stupid, they know the problem with left-handed shooters and so they design their weapon with that in mind. The F2000's forward funneling ejection port system is very innovative and solves the problem, but personally I don't 100% trust its reliably. My bullpup assault rifle that I'm designing uses a flippable ejection port like the the AUG, atleast for now.

Checking, theirs isn't an Austeyr, it doesn't have an ALO tab at the bottom of the trigger for locking out the fullauto fire mode. It seems Steyr only sells bayonet lugged barrels to military customers (and not the Austrian military, which doesn't use a lugged barrel), so you're only really likely to see a bayonet lug on an F88 in anything live action. ALO is also on Irish Army AUGs, but it's not that likely you're going to see one of them in a movie. Apparently some newer AUG versions have started using a 3-position fire selector rather than ALO or two-step trigger (rather than just having right-safe left-auto there's a middle "semi" position, though the trigger is still two-step even on the auto setting), I guess that's why my pic of the F88S doesn't have an ALO. Evil Tim 09:09, 13 July 2011 (CDT)

the automatic lock out (ALO) is used on the police models it was incorporated on the irish defense forces models as full auto would be wasteful of ammo which is understandable in the heat of the moment you could empty a full mag in a heartbeat --Seekerdude (talk) 16:44, 7 July 2015 (EDT)

Is it just me or the reload animation of the Steyr AUG in Counter Strike resembles how to reload an MP5/G3? I mean if you look at it at the end of the reload, it seems the player performs an HK Slap.

AUG charging handle locks similarly to MP5, G3, HK33 etc. After locking it points more upwards than in H&K products, but if you want, you can slap it. -Sentinel- (talk)

I noticed the AUG A1 being in Black Ops (incapable of being in that time period), but there is the AUG A2 (which someone typed in). Shouldn't there be one variant or are there two? --Alkillmatic (talk) 02:55, 17 December 2012 (EST)

Does anybody know the name of this grenade launcher mounted underneath the AUG A3? I searched about it but couldn't find the name. --Ultimate94ninja (talk) 05:57, 11 January 2015 (EST)

It isn't a normal M203, but the design is based on the M203 with some modifications to make it work on the AUG (RIS mounts, extended folding trigger, a different more conventionally textured handguard, shorter barrel, and simpler frame without the barrel clamp provision at the front). I have never seen a name for it though, I think it was only experimental anyway (the front of the frame of the launchers in those two links is shaped differently so they were apparently still tinkering with it). --commando552 (talk) 12:17, 31 January 2015 (EST)

Eh, most of the times when I saw pictures of this it simply labels it as "40mm grenade launcher". Anyway, would it be notable to put the image in this category page? I did it previously, but then I removed it due the probability of it being an M203. --Ultimate94ninja (talk) 07:54, 1 February 2015 (EST)

Just wondering if below ‘duck beak’ flash hider (rather than the ‘birdcage’ flash hider) on a Steyr AUG is indicative of an official Austrian Army Version? 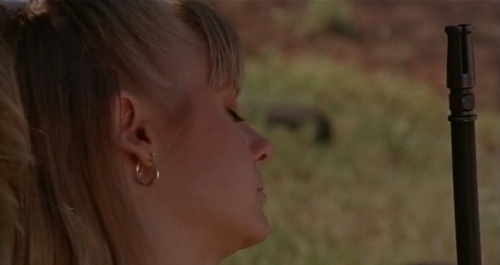 I was curious because this movie (upload later this week) was shot on Hawaii and one would not really expect to see an official Austrian Steyr AUG flash hider show up there. Let me know if you have any idea, PeeWee055 (talk) 05:47, 9 March 2015 (EDT)

I'd assume it's possible to get hold of the duckbill given the top image on the main page is one with a duckbill hider which belongs to an American armourer (MPM). Evil Tim (talk) 06:45, 9 March 2015 (EDT)