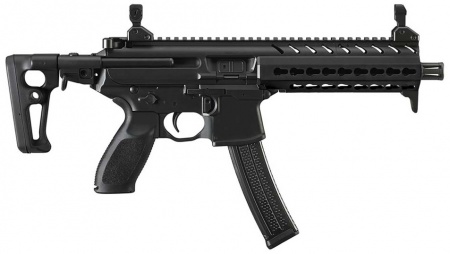 SIG-Sauer MPX SBR Gen 1 fitted with a KeyMod handguard - 9x19mm. It can be distinguished from the Gen 2 version by the different ejection port, the non-ambidextrous charging handle and the standard MIL-STD-1913 Picatinny rail. 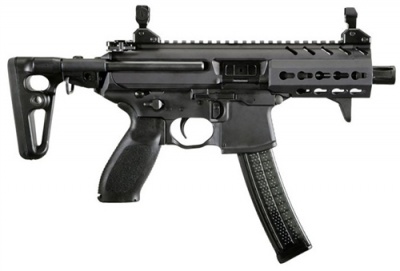 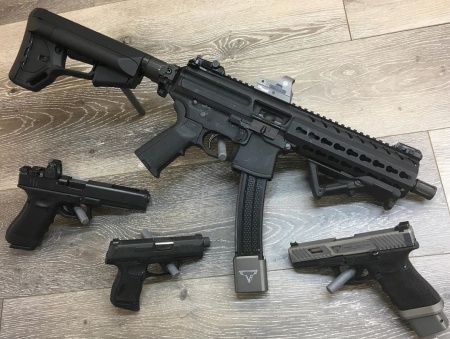 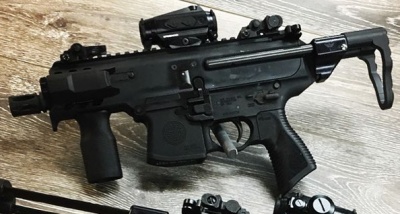 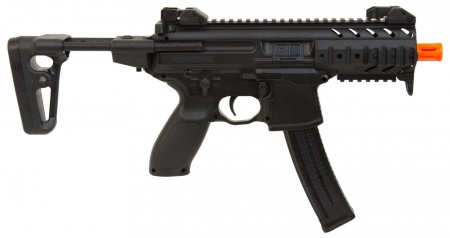 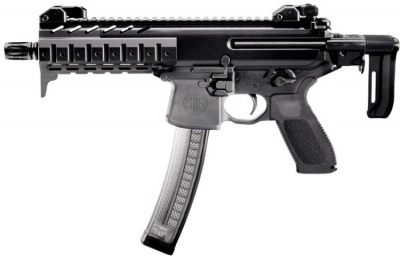 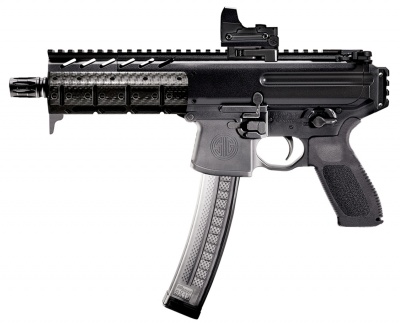 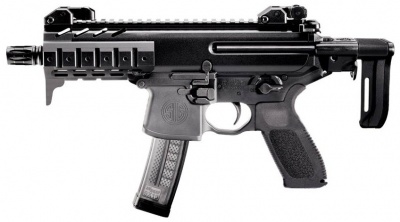 Normally it should, I believe, but the thing is that it doesn't have any listed media appearance. It does appear in a video game, but its page lacked screencaps, and thus was deleted. According to the user who made it, the worthy screenshots are the in-game pictures of every weapon since it's a top-down 2D tactical game. Since the VG page's content (still present in the storage) features good descriptions of the weapons, if we upload the aforementioned weapons menu icons coupled with this then I think the page could be eligible.

If it isn't, I thought we'd put the image here for now, otherwise we just keep it in the SIG-Sauer page.

Does anybody know what the correct terminology for the different generations of this gun is? As far as I can tell there are currently 3 different generations of this gun. The first is the one that is what all the variants on the main page are. Then there is a second one where the SIGMod handguard was changed to aluminium rather than carbon fibre, steel inserts were added through the left side of the receiver for the bolt cam pin, the lower was redesigned slightly and has a different safety, mag release and an ambi bolt catch, and the stock is different being thicker and having a slight slope to it. The third model is similar to the second, but introduced a Keymod handgaurd, scalloped the top rail like on the MCX, and the upper was internally redesigned to take calibre conversion kits. According to this video from SIG, the latter two version are the Gen 1 and Gen 2 respectively, but what does that make the first one that all are images are of? Was this a prototype that was never actually released, or is it just a very early pre-Gen 1 commercially available variant? --commando552 (talk) 07:36, 27 April 2017 (EDT)

What's even more confusing is that the specific version shown in our earliest images doesn't seem to have ever been shown in actual demonstrations. All live-firing versions of the prototype/pre-Gen 1 MPX shown in videos (notably at SHOT Show 2013) have some differences, including an altered stock and a handguard nearly identical to that of the Gen 1 MPX. I wonder what we should call it, a "second prototype"? I'll go with this for now as I'm making the necessary changes. --Ultimate94ninja (talk) 15:03, 24 February 2019 (EST)

Actually, I've been getting a strong feeling that the "first prototypes" were just photoshopped images, for promotional purposes or something. For starters, they were apparently released at the same time as the reveal of the actual weapon, and most of them only have three diagonal holes in the non-removable part of the handguard instead of four (the only exception is the MPX-C, which is shown with four, and this is pretty much inconsistent with the others given the modularity of the weapon, nevermind that this specific one is weirdly shown with a full-auto selector switch). That Photoshop issue doesn't come as a surprise to me, considering that SIG-Sauer did also later display some current-production MPX images that were actually photoshopped and that did not exactly match the real weapons. --Ultimate94ninja (talk) 08:14, 6 September 2019 (EDT)

The MPX seems to be replacing the MP5

Well, they kinda did with the UMP, and the UMP45 is pretty popular in games at least (most military and police forces nowadays prefer PDWs or compact assault rifles tho). And I agree, esthetically speaking the MP5 really is showing its age. The MPX looks more modern. --Dan San (talk) 07:12, 19 August 2020 (EDT)