The revolver that is held to the rebel's head appears to be a non gun as it has no markings and looks 'too smooth' to me - which would make sense from an actor safety standpoint. I'd say it's standing in for something similar to a .357 Model 65. I made another pass and in the scenes without the actor in frame it is an actual pistol - and it still looks like a Model 65 to me. 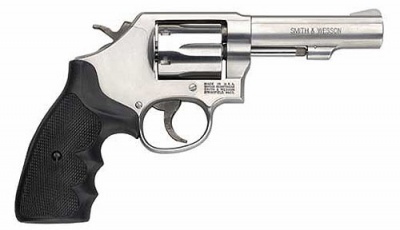 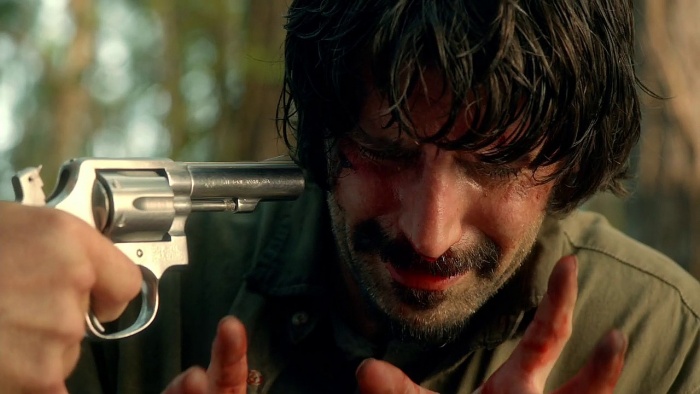 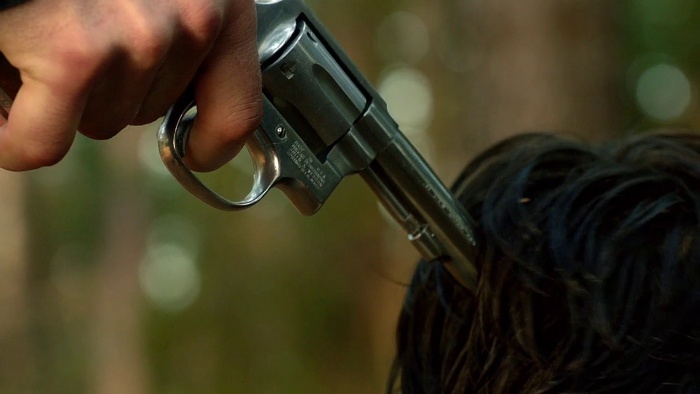 The gun held to the actors head definitely has the Smith & Wesson trademarks on the frame underneath the cylinder and ahead of the trigger guard. There are also the markings on the barrel on the same gun. --SmithandWesson36 (talk) 18:44, 5 October 2012 (EDT)

Someone should note that the Eotechs and laser sights aren't working anymore, so in Eotechs case it would actually make aiming harder. --Iceman (talk) 14:17, 16 October 2012 (EDT)

agreed might be airsoft did any one see them being fired as no energy no red dot on the screen in front of your eye acog sights that use the light pipe might work --Seekerdude (talk) 20:01, 16 October 2012 (EDT)

Well iron sights and anything like them will work no others, because as far as I can understand the concept, its not like an EMP it doesn't fry stuff it simply eliminates anything electric, so for example a hand operated generator will not work.

As the mechanism that caused the blackout hasn't been explained in anyway yet, it is hard to say what kind of illuminating scopes would work. Stuff that illuminates the reticle through fibre optics would work, phosphorescent sights would probably work, and tritium sights would possible work. However based on the fact that nothing that generates electricity works any more it seems like something is suppressing electrons from flowing which would also mean that tritium sights would not work (these glow by electrons given off through radioactive decay hitting a phosphor). I'm probably over thinking it though, as if this was the case then the human body wouldn't work either, so I can think of no explanation that makes any kind of scientific sense. --commando552 (talk) 07:57, 17 October 2012 (EDT)

Can anybody identify the two revolvers given to Aaron and Nora by Drexel to shoot each other with?

M4 ACOG from "Nobody's Fault But Mine"

Real Trijicon ACOGs contain no electrical components whatsoever. So yes, it works without batteries. The Wierd It (talk) 14:34, 27 November 2012 (EST)

Even with no illumination you would still have the normal reticle. Day time illumination would be fine as that uses a light gathering fibre optic tube. As for the night time tritium illumination, I'm not 100% sure that would work, depends on the magical physical rules of the blackout which haven't been explained. --commando552 (talk) 16:02, 27 November 2012 (EST)

I know it's 15 years later, but...did they just raid a Civil War collection because a lot of different guns, repeating guns and self contained cartridges were made way before the advent of electronic machining tools. It was just hilarious for the one scene where the muzzle loaded rifles were being pinned down by a single sniper with a 700. Excalibur01 (talk) 12:23, 28 November 2012 (EST)

Not to raise a dead discussion, but I think its done so the militia couldn't go funny and throw a coup or something, or rebels wouldn't have easy access to weapons by ambushing 5 to 10 soldiers, remember Monroe had some advanced weapons on site I assume his personal guard get the fancy stuff (there were the UMP's with the ridiculous Eotechs) and rest is kept in case of war. No reason to use a lot of ammo if people can be kept at bay with simpler shows of force. --Iceman (talk) 17:59, 14 April 2013 (EDT)

I know this show is known for its ridiculous use of props (the non functioning Eotechs on guns) but those are background pieces, my question is this, would the AT4 fire, OK so its not guided, but still correct me if I'm wrong but its not exactly a pin initiated weapon, there has to be some sort of electronic work involved. --Iceman (talk) 17:55, 14 April 2013 (EDT)

AT4s have a firing pin which must be cocked before firing which strikes a primer similarly to on a a normal firearm so it should work. AT4s are fairly simple, they are pretty much just a recoilless rifle shell sitting in a fibreglass tube. Regardless, in the episode the helicopters are carrying amplifiers which means any electronics in the vicinity work. I can't remember if they treated it like they needed the power to fire the AT4, but if so then that would be a mistake. --commando552 (talk) 14:38, 18 April 2013 (EDT)

I don't think the caps of the gun being used towards the end of the episode are of a 6906. Firstly it lacks an ambidextrous safety which would be an a 6906. Also it lacks the texturing on the front of the trigger guard which is on 3rd generation pistols. Also, although hard to tell from this angle, it looks too big to me to be one of the compact variants and I don't see a double stack frame step. My guess is that it is an early model 2nd gen gun like the 639. However I remember that the one at the start of the episode when he takes it out of the box is definitely a 6906 so it is a continuity error. --commando552 (talk) 14:26, 18 April 2013 (EDT)

Yes, I also agree on who is a Glock. Recently I saw another picture of the gun and gave me the feeling that might be a Glock 18C or Glock 19. What think you? Sorry for my bad english jaja.--Lux (talk) 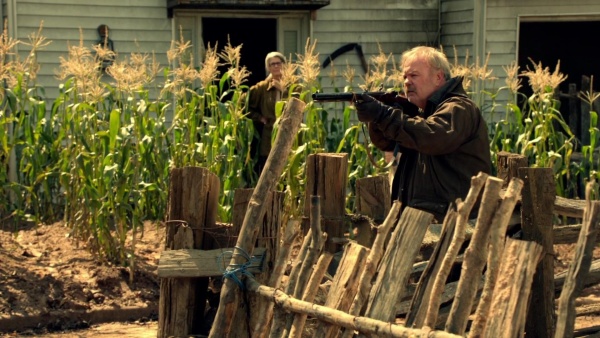 It seems pretty, here I leave another picture. 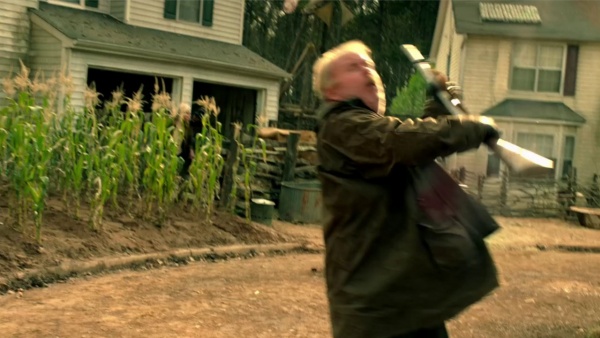 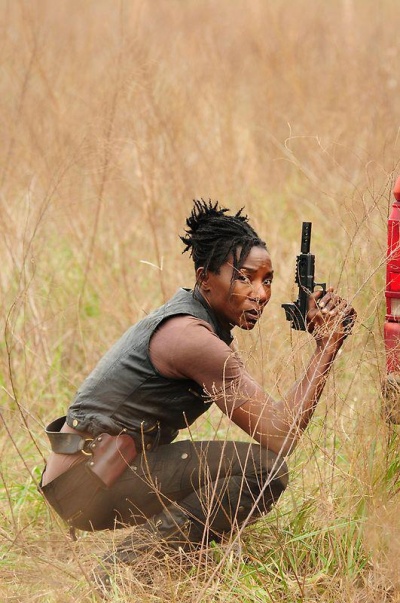 Promotional image of Rosie with the gun. 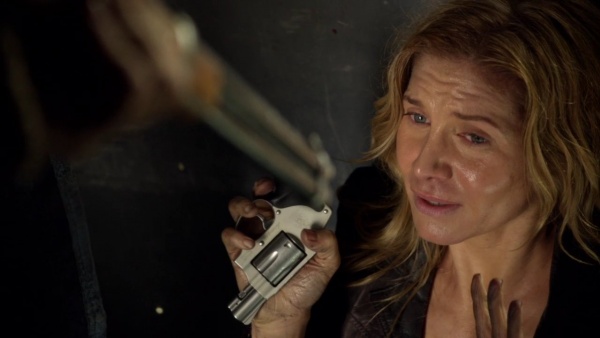 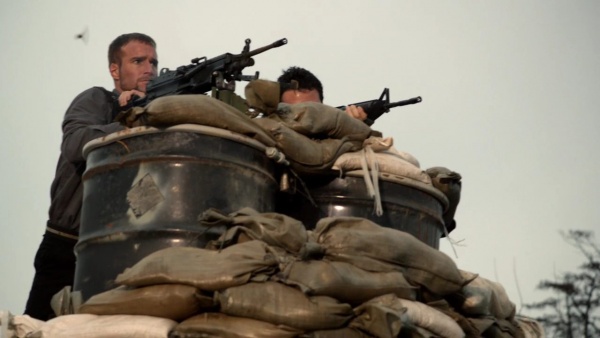 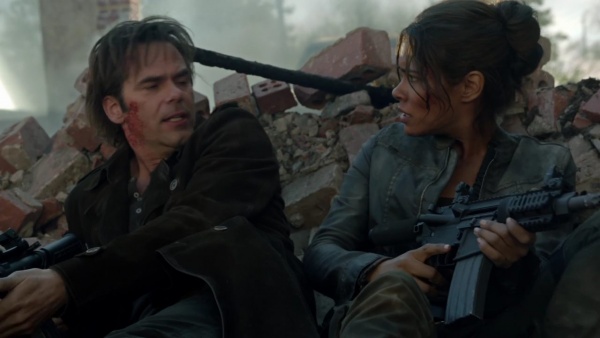 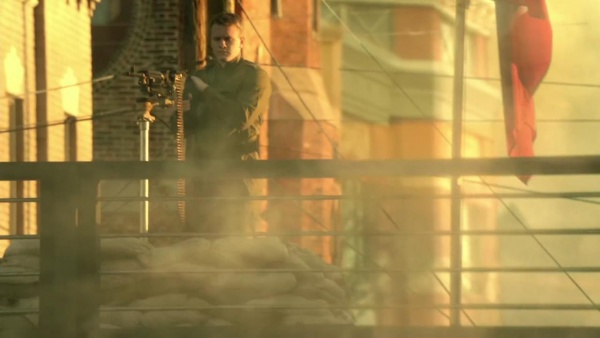 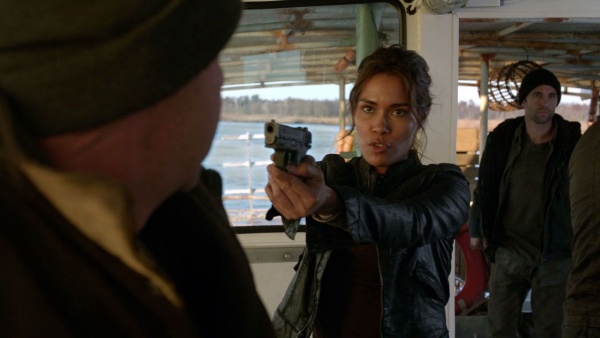 You have some image of the LE for use in the page? thank you very much --Lux (Talk) 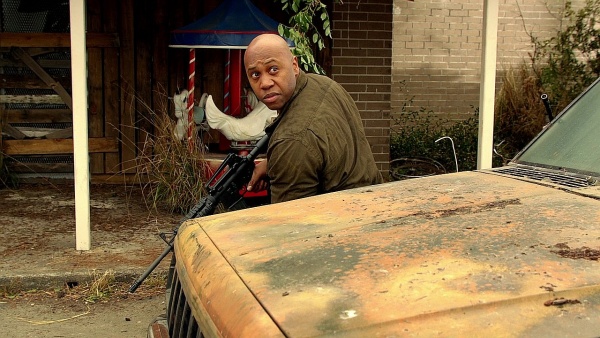 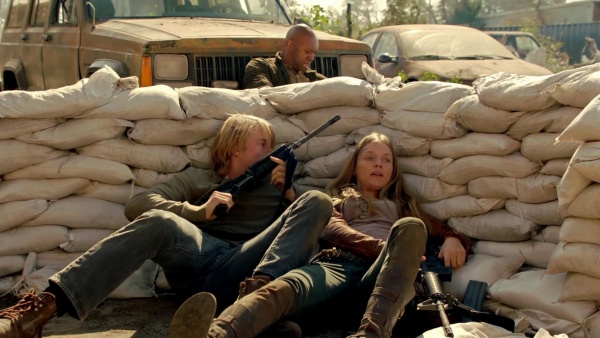 I think these guns are most likely Airsoft replicas, as seen below:

Firslty, it has a shorter barrel than a regular Milkor. Secondly it has the same Crane(ish) stock with the cutout at the bottom (this is the ICS replica of the Crane stock). Thirdly, when the guns fire they do not look like a genuine blank fire muzzle blast, but more like what would be produced by ignited gas or a pyrotechnic charge. Sometimes the end of the barrel even continues to be on fire after the shot. This appears to be the type that is used in all firing scenes, but there are a hell of a lot of continuity errors in this episode with grenade launcher changing around. I think there was one guard which had a regular looking Milkor, which changes to the short barrelled one when firing, and then changing to a Sage Control SL-6 when he dies. The SL-6 is also carried by Rachel when she arrives at the fight, is then a normal barrel Milkor when she is captured, but then the guard carrying her weapon has the SL-6 again. The whole thing is a total mess. --commando552 (talk) 14:27, 28 May 2013 (EDT)

Yes, now I realize that you're right, and I have noticed more clearly now the SL-6 Rachel. Regarding the airsoft, I'm sure it's used in the series.--Lux (talk)

Would we post screenshots from the web series Enemies of the State and Wheatley's Letters The videos are only a couple minutes long, two or three minutes long. There's only a couple of firearms, including Monroe's bigass pistol, so I'm not sure It'd be worth it. Just a-wondering. 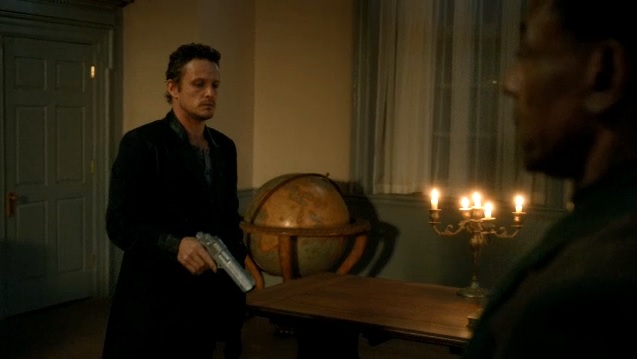 I think we could do it as the page of The Walking Dead Season 3, add in this section (Discussion). --Lux (talk)