You have asked for evidence that the "M249s" in both Stargate TV shows are actually Daewoo K3s. Here is the best I can come up with. Here is a screenshot from the Atlantis episode "Duet", where Tayla is firing her weapon: 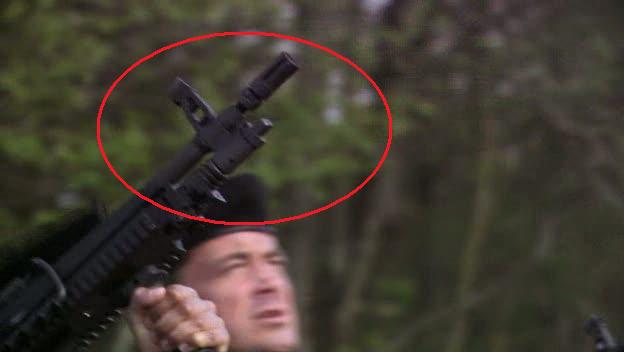 Look closely at the front sight and the end of the gas tube. Now here are the two weapons types:

Notice how the front sight and gas tube match the K3 far better than the M249 Para. If you want to see other places where we've discussed the differences, check out this topic in the Fourm: http://www.imfdb.org/forum/showthread.php?t=323 -MT2008 17:54, 8 July 2009 (UTC)

You DO realize that you misspelled "Weird", right? MoviePropMaster2008 21:37, 20 November 2009 (UTC) http://www.urbandictionary.com/define.php?term=wierd

You're wrong. H&K PDWs DO have flash hiders. They're not necessarily sold with them, but Heckler & Koch has the quick detachable birdcage flash hider and most PDWs have them on them. That image is of the H&K quick detach flash hiders. MoviePropMaster2008 18:26, 6 December 2010 (UTC)

The H&K Quick release flash hiders are sold separately .... can't remember the last time we bought some, but they were ridiculously expensive for what they were, but what is nice is that you can blank adapt the flash hider and not ruin the barrel of the MP5K, that is if you didn't want to ruin a perfectly good (and expensive) MP5K barrel! LOL. The only problem is that some 'director' somewhere may request either NO flash hider or a wierd custom Sci fi one, and then as a movie armorer we're screwed and we look like fools on set. So, alas, 99% of MP5s are tapped and threaded for blanks in the barrel themselves :D MoviePropMaster2008

Why would "British Bobbies" intentionally hobble themselves for firepower?

Thanks for editing the MP5 section of the SWAT 4 page. I've done some reading up on how many British police (save the Armed Response units) don't normally carry firearms, but it seems odd that if they are going to bring 5.56mm or pistol-caliber carbines into the mix, they're forced to use semiautomatic fire only without even a burst setting for enhanced lethality.

On a side note, wouldn't a semi-auto only MP5 put it into the territory of the HK94? Doesn't an SMG have automatic or burst-fire capability as a defining feature? Without that, it's just a pistol caliber carbine, like the HK94, but they still call it an MP5, even though it's no longer a "machine pistol" (which the MP refers to). I take it they're using MP5s and G36Cs (instead of, say, a Beretta Cx4 Storm Carbine or Rx4 rifle) because of how the British government once owned a controlling stake in H&K, right? I think that the G36C is a bit of an odd choice given that its 9-inch barrel (from what I've read) isn't long enough to reliably achieve enough velocity for fragmentation of its 5.56mm rounds--wouldn't a G36K with a folding stock be better suited for the task or an SA80? If you're restricting yourself to semiautomatic fire, why not get the most velocity you can to make every hit count?

It's no secret that "Her Majesty's Dominion" has gotten less nice over the years. The alcohol-fuelled violence is not letting up, as this video aptly explains (are they saying "Wallington" or "Worthington" at around 4:01?). As with Harry Brown, I wouldn't be surprised if chavs in real life went on shooting sprees once they got their hands on automatic weaponry. Pile on the the 2005 London terrorist bombings, the 2010 Cumbria mass shooting, and I know I wouldn't like to be be undergunned or be less able to handle threats like well-directed bursts of fire can (as opposed to being restricted to semiautomatic fire) if I was in an ARV or even a first-responding bobby at a shots-fired scene.

Britain has had the fortune of not being subjected (so far) to "Kilmer and De Niro from Heat wannabes" (like the North Hollywood shooting), but as Roger Moore said in The Man with the Golden Gun, " . . . there can always be a first time." We do not need another Hotel Mumbai attack (as happened in Mumbai in 2008) but it is better for LE forces to be prepared in any case. It's chavs taking potshots at firefighters' trucks today, but it could well be terrorists with automatic weaponry tomorrow. --Mazryonh 01:22, 16 March 2011 (CDT)

In an incredible coincidence, I'd just found one of those in singleplayer and was going to add it later. Evil Tim 09:19, 12 November 2011 (CST)

Hey man. Thanks for the help with the CSI: NY - Season 8 page! Just so you know, the images were intentionally sized at 601px. Basically I uploaded the images then relized it would be better to remove the CTV logo from them. In order to make the updated image appear you need to either wait like 2 weeks or change the size of the image by as little as one pixel. For some reason resizing it forces the updated image to display. I'm going to change it back so no worries but thanks for helping to identify the gun! :-) --Zackmann08 12:59, 26 February 2012 (CST)

As entirely ridiculous as it sounds, apparently the Malaysian military has a version of the XM8 (XM8R) with rails instead of PCAP and a fixed scope (though some have PCAP and others don't, it seems). 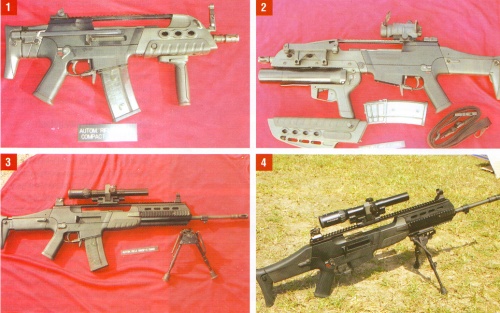