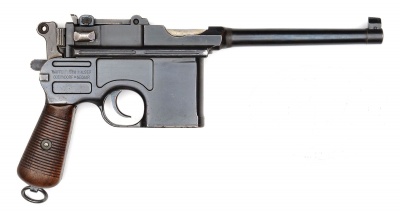 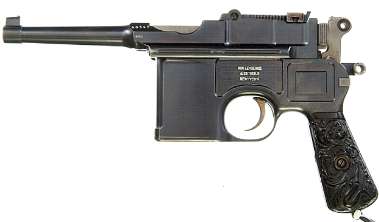 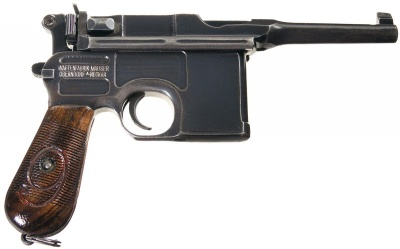 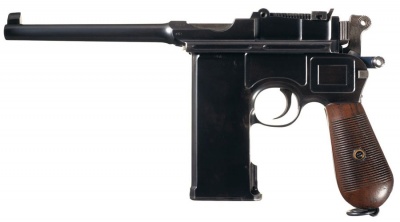 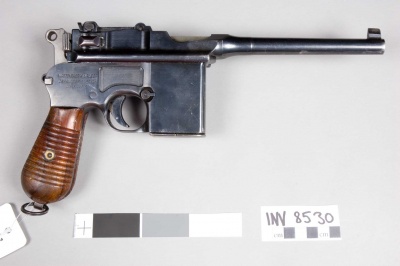 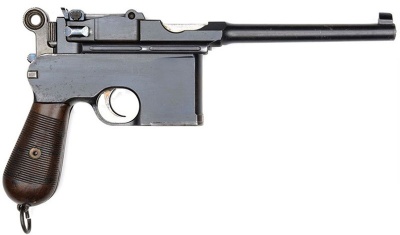 A Mauser C99 "Regia Marina", designed for the Italian Royal Navy in late 19th century, and first semiautomatic pistol to be ever issued to an Italian armed force (even before the Glisenti 1910). It is distinguished for the typical "slab side" and generally less-refined outlook, and has the early "large ring hammer." 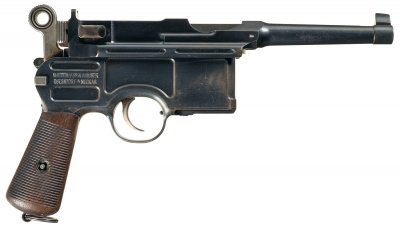 Another early production six-shot Bolo, with a "large ring hammer." This example was imported into the United States by "VON LENGERKE/& DETMOLD/NEW YORK" which is stamped on the other side. 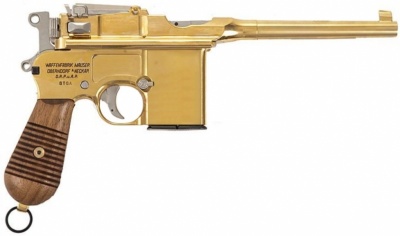 Airsoft WE GBB "Mauser M712 Carbine" - (fake) 7.63x25mm Mauser. This configuration never actually existed on a live-firing gun, but can be seen on replicas.

Yes and no. The engineering is fascinating. There is only one screw in the entire pistol and that's for the wooden grip panels. Everything else fits together. It's akin to a fine watch which isn't a surprise considering it was designed in the late 19th century. It's also a reliable design, but becasue of the complex engineering the Mauser C96 has alwasy been an expensive pistol. I've seen ads from the 1920's where they were charging $100.00 for one. That was alot of money in the twenties.

Now if you are talking ergonomics it's a different story. I've actually had the privlige of firing one. The grip is small and the balance is odd. The 30 Mauser is a hot little load and there is some pretty fierce recoil. Because of the way it's designed the bolt slams back and forth and drives the grip into the webbing of your hand. If any model needed a redesigned grip this would be it.

However the C96 was intended to be used as a carbine instead of a pistol. So when you attach the rifle stock it transforms into a nice little plinker and it's surprisingly accurate as well.

The C96 was one of the first manufactured semi-automatic and full automatic pistols. It wasn't perfect, it was expensive to make, time consuming to make and expensive for the consumer. But it was reliable and it was first which ensures that it will alwasy have a place in handgun history. In many ways it was a dead end when talking about pistol (semi-auto handgun)technology, but by god it's just so damm cool. There are many designs that are more practical and superior, but they'll never equal the C96 Broomhandle when it comes to charisma.If ever a handgun was just destined to look good on film the C96 is it. --Jcordell 13:45, 9 November 2009 (UTC)

Too bad no one currently manufactures working replicas. I would love to own a C96 but when I see them at gun shows, the dealers won't let me handle them due to the pistol's age. This means that I can't get an idea of how it's going to handle-S&Wshooter 21:36, 9 November 2009 (UTC)

Truth be told S&W Shooter the dealers probably don't trust you becasue you're a teenager. Right or wrong I'd be willing to bet that's the deal. I'm 41, balding and wear glasses. It's never an issue for me. Dealers are happy to let me handle their merchandise but there tends to be a bias against folks under 21. --Jcordell 00:22, 10 November 2009 (UTC)

No. There is a similar situation for the Colt SAA. The first generation SAA's are collector items and antiques even though several different companies are still making the SAA. --Jcordell 00:25, 10 November 2009 (UTC)

Yeah that's probably why. Stupid prejudice. They have a gun shop near my school and if I want to ask the owner a question I have to get my father to ask him for me. It pisses me off because I know alot more about firearms than the clerk, who's knowledge of guns doesn't extend past Taurus pistols-S&Wshooter 01:06, 10 November 2009 (UTC)

I don't even go to that place anymore because of it. I go to Carter Country, where the employees are ecstatic that a young person such as myself is interested in guns and shooting-S&Wshooter 21:25, 10 November 2009 (UTC)

Yeah I agree. Also, in my opinion, 13 rounds is a hell of a lot of bullets for a single mag-S&Wshooter

that one of my problem, I think I will have the C96, it is a cool looking gun Rex095

Need to Confirm a Few Things

So like the guy above me, I am writing a story that prominently features the C96. The story is set in an alternate history steampunk Britain in 1899, where technology of the era and more futuristic technology mingle. The main character is an elite former British special forces soldier, framed for the murder of Queen Victoria's heir while Britain descends into civil war between the totalitarian military government and the resistance forces. The C96 he uses is customized with a black ebony grip, nickel plated finish, the ability to accept a 15 round box magazine, and a semi auto, three round burst, and a full auto mode.

So my questions are, is is feasible to modify any pistol to accept fire rate modifications? Also, can the C96 (a basic one) be hand loaded mid-magazine from the top? Or do you have to wait until the magazine is dry and just use a stripper clip?

The modified C96 isn't the only weird gun in the story. I'm trying to keep in realistic in a sense (trying). The British army use assault rifles and submachine guns in the late 19th century, there's also a man portable Maxim Gun, a flamethrower, and American mercenaries seen later on use the "Walker Carbine-" think a smash together of the M1 Carbine, Garand, and the M14. --PyramidHead (talk) 09:21, 21 July 2013 (EDT)

About the 20-round C96 magazines, do they also have the automatic bolt-closing system like the normal C96? If that is so, does that mean that to reload them with 10-round stripper clips, you will have to load 10 rounds, remove the stripper clip and having the bolt slam shut, then manually open the bolt again to load in the next 10 rounds? --Wuzh (talk) 00:25, 30 August 2018 (EDT)

As far as I read sometime, yes (I could be wrong now, however). This is one of the reasons why the 20-shot version did not become popular. As far as I remember, you had to hold the bolt manually there, also concerned if you wanted to reload your C96 with single rounds. The slide-stop latch appeared only on the M712, but it made little sense, since you can simply replace the magazine. Not sure about foreign copies though. --Slon95 (talk) 17:52, 17 July 2019 (EDT)