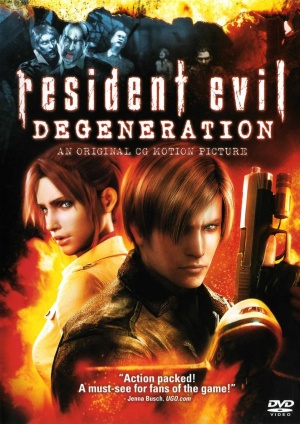 Resident Evil: Degeneration is a computer-generated film released by Capcom in 2008. Degeneration is canon to the main-line video game series, unlike the Paul W.S. Anderson live-action films (which haven't been well received by fans and critics).

The story takes place in the fictional city of Harvardville, U.S.A. in the year 2005 (one year after the events of Resident Evil 4), where it is revealed that in the seven years that have followed since the destruction of Raccoon City in 1998 (as depicted in Resident Evil 2 and 3) and the dissolution of Umbrella Corporation, a pharmaceutical company called WilPharma has taken the reigns of continuing the study/research of the T-Virus to prevent any future biohazardous outbreaks or future bio-terrorism attacks. However, when a T-Virus outbreak occurs without warning at the city's local airport, special agent Leon S. Kennedy is called in to deal with the outbreak, and to find out who or what is behind it. During which he is reunited with his old partner, Claire Redfield, and along with the help of several other allies, they both begin to discover that there is more behind the circumstances surrounding this T-Virus outbreak than there seems to be...

The following weapons were used in the film Resident Evil: Degeneration:

Leon's primary weapon throughout the movie is the same fictional custom handgun he used in Resident Evil 4, nicknamed Silver Ghost, with the laser sight being swapped for a flashlight. 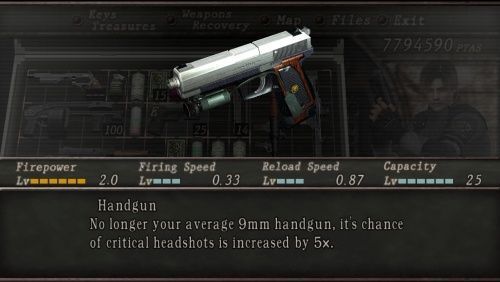 The Silver Ghost as seen in Resident Evil 4.

Leon readies his Silver Ghost as he infiltrates the overrun airport with Angela and Greg.

Leon taking aim down the ironsights of his Silver Ghost.

Leon aims at Curtis Miller during the climax in WilPharma's underground facility.

Leon keeps a Glock 26 with a Pearce Grip +2 mag extension in an shoulder holster as a backup, which he gives to Claire near the end of the movie. This is also seen in the promotional posters as Claire's gun.

Claire keeps the Glock 26 at the ready as she attempts to reach the control center of WilPharma's underground facility.

In a flashback of the Raccoon City Incident (see Resident Evil 2), we see Leon with his VP70M machine pistol that he used when he was part of the Raccoon PD.

Leon fires his stockless VP70M at several zombies during the flashback to the events in Raccoon City in 1998 (The year that Resident Evil 2 takes place). 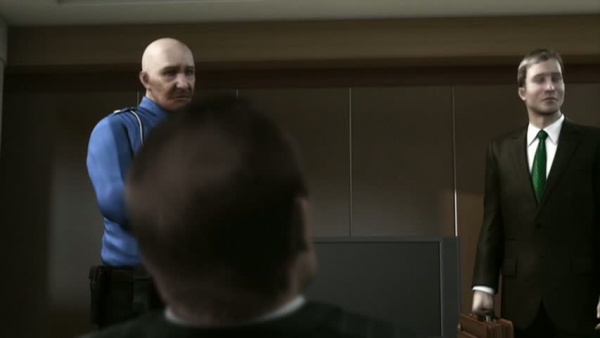 Senator Davis meets with the Harvardville Police Chief. Note the Glock 17 in the officer's holster. 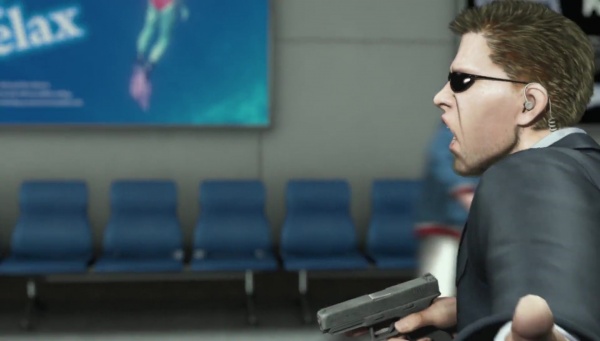 Davis' bodyguard makes an unflattering face while trying to clear civilians out of the way so he can shoot the attacking zombie. Note both the accessory rail (indicating a Generation 3 model) and the bodyguard's good trigger discipline. 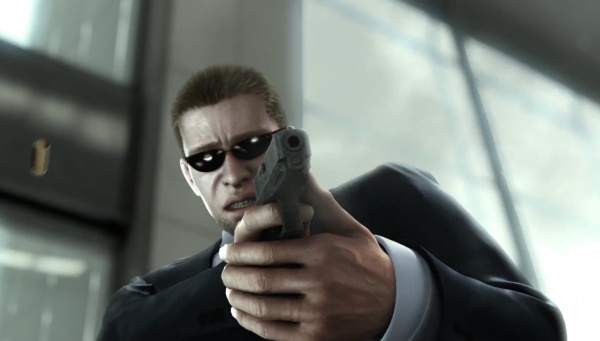 Davis' bodyguard fires two rounds from his Glock 17 into a zombie's chest, which ends up doing nothing since the zombies of Resident Evil are based on the Living Dead, and can only be killed by destroying the brain.

Angela's sidearm is a Glock 17 fitted with a Glock 26 slide, Novak-style sights, and a barrel weight/compensator. This seems to be based on the "G26 AdVanced" frmm Tokyo Marui, an airsoft company that provides reference material on firearms for Capcom, as Angela's Glock has identical modifications to it (the only difference being the Glock 17's full length grip/frame). 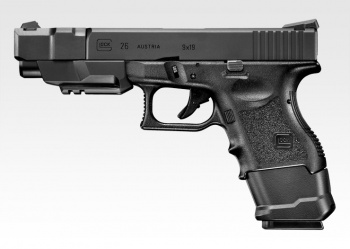 Angela loads up a fresh magazine into her customized Glock...

...then releases the slide to chamber a round.

At the end of the film, Frederic Downing uses a nickel-plated Walther P5 Compact near the end of the film. He racks the slide after drawing it, indicating he carries the pistol without a round chambered - not the best idea for self-defense. Then again, considering that he's a corporate executive, he probably hasn't had very much formal training. 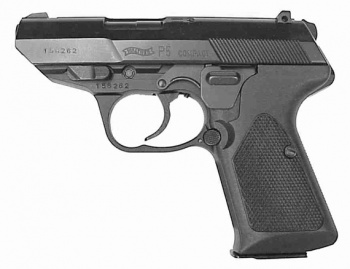 Frederic Downing brandishes his Walther P5 Compact at Claire and Leon in the film's climax.

Downing keeping his P5 trained on Claire and Leon as he attempts to call their bluff.

Angela's primary weapon is a custom Heckler & Koch MP5K-PDW. It features an interesting vertical foregrip attachment that is latched onto the weapon with a thumbhole and an integral flashlight. The front and rear sights have been replaced with a single piece that forms a rail across the top of the weapon similar to that of the H&K G36C's rail. The PDW's standard folding stock has been replaced with a retractable buttstock like those found on the full-sized MP5A3 and MP5A5. 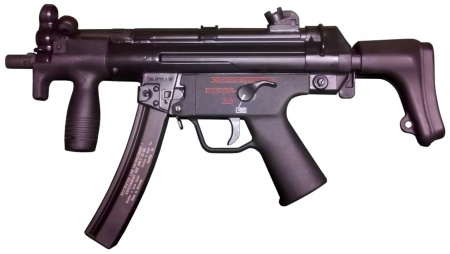 MP5K "Reverse Stretch" - 9x19mm. This is a custom weapon created by combining an MP5K front end with a full-size MP5 receiver. This results in an MP5K capable of accepting a standard MP5 stock, in this case an MP5F retractable stock.

Angela searches a room inside the overrun airport with her custom MP5K at the ready.

Angela prepares to fire her MP5K at an approaching zombie.

Angela loads up her MP5K as she prepares to go face her brother.

Greg is seen using a M4A1 Carbine with a railed handguard, no carry handle and a removable rear sight. The 75th Ranger Regiment are also seen using factory standard M4A1 rifles. Most people had identified them as Marines, but the official biohazard DEGENERATION Visual & Scenario Archive book has the Japanese-based script that identified them as Rangers.

Greg readies his M4A1 as they prepare to infiltrate the overrun airport.

Greg reloads his M4A1 during the escape from the airport.

Rangers take aim with their M4A1s as they prepare to clear out the overrun airport.

Two of the Rangers carry M4A1 Carbines with M203 under-barrel attachments when they engage with an infected Curtis Miller in WilPharma's underground facility. Leon later picks up one of these carbines. They noticeably have folding front sights instead of the standard front sight post.

A Ranger takes aim with his M203 at an infected Curtis...

...but ends in getting brutally sliced up by Curtis.

Leon however, manages to put the M203 to good use.

Claire is armed with a Remington Model 1100 in the flashback of the Raccoon City Incident. While this weapon was available in Resident Evil 2, it was not available during Claire's campaign, it was likely borrowed from Leon as she was in close proxy to him in the flashback.

Claire fires her Remington Model 1100 against several zombies during the flashback to the events of Resident Evil 2, during the zombie outbreak in Raccoon City in 1998.