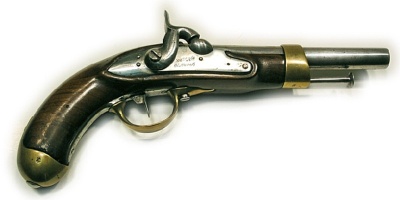 The percussion cap replaced the flint, the steel "frizzen", and the powder pan of the flint-lock mechanism. It was only generally applied to the British military musket (the Brown Bess) in 1842, a quarter of a century after the invention of percussion powder and after an elaborate government test at Woolwich in 1834. The first percussion firearm produced for the US military was the percussion carbine version of the M1819 Hall rifle.

The discovery of fulminates was made by Edward Charles Howard (1774–1816) in 1800. The invention that made the percussion cap possible using the recently discovered fulminates was patented by the Rev. Alexander John Forsyth of Belhelvie, Aberdeenshire, Scotland in 1807.

The Percussion Cap Pistol and variants can be seen in the following films, television series, video games, and anime used by the following actors: