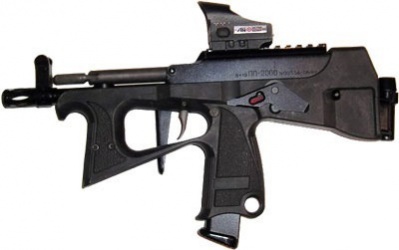 The PP-2000 is a Russian submachine gun developed by the KBP Instrument Design Bureau of Tula, Russia. Created in 2001, it was first shown to the public at a weapons trade show in 2004. It was launched into mass production in 2006 and is currently being fielded in limited numbers with law enforcement units in Russia. It is designed specifically to use Russian 7N21 and 7N31 overpressure 9x19mm ammunition, with the intent being to produce armour-piercing capability to compete in the vaguely-defined PDW market. The PP-2000 can also fire conventional 9x19mm Parabellum rounds.

The PP-2000 and variants can be seen in the following films, television series, video games, and anime used by the following actors: