The following weapons were used in the film My Zero Hour (Meine Stunde Null):

Blank (Friedo Solter), a member of NKFD, who speaks with Hartung, carries a Nagant M1895 revolver. This is a visually modified prop, fitted with elongated barrel and wide grips. It appears to be the same prop, used in Die Söhne der großen Bärin 1966 Western movie.

Elongated barrel and wide grip with decorations can be seen.

Soviet intelligence officer Maj. Gornin (Anatoliy Kuznetsov) carries a Walther PP pistol in several scenes (Note: Gornin is credited as Oberleutnant but he has Soviet Major insignia, while he appears in German Oberleutnant uniform only during the operation across enemy lines). During the operation Kurt Hartung (Manfred Krug), disguised as an officer, also carries a Walther PP.

Gornin (at the right) cleans his Walther PP.

He puts the pistol into holster.

Hartung puts his pistol into holster.

A closeup of Gornin's holster.

Soviet Sgt. Mitja (Lev Prygunov) carries a Luger P08 whe he is disguised as a German NCO. A Luger is also seen in hands of Pvt. Meyer (Karl Sturm).

A view of the Luger from the rear.

He shoots the wheel through the floor of the truck.

A good view of Mitja's pistol.

Meyer aims at Hartung's back.

Mitja holds his Luger and another one, taken from Obergefreiter Diegenhardt (Thomas Weisgerber).

In one scene Maj. Gornin (Anatoliy Kuznetsov) carries a pistol in TT-33 holster. The grip of the pistol seems different from TT.

In another scene Gornin holds an unidentifided pistol, instead of Walther PP that he carries in previous and following scenes. The pistol bears resemblance with CZ 27 but it's only a guess.

Most Soviet soldiers are armed with PPSh-41 submachine guns.

They aims PPSh-41s at captured Hartung.

A PPSh is seen at the background.

A PPSh at the bed of wounded Rumjanzow (Valentin Grachyov).

A PPSh at the bed of wounded Matuloff (Vitaliy Komissarov).

An MP40 is seen in hands of a Soviet scout, disguised as a German soldier.

A pair of Sturmgewehrs is seen on the wall in village house in which the German unit is housed.

Hartung (at the right) carries an StG44.

Another good view of StG44.

Soldier at the left and two soldiers at the right in distance carry M38 Carbines.

Most German soldiers are armed with Karabiner 98k rifles. This is historically correct, by contrast with numerous war movies that shows each and every Wehrmacht soldier with MP40.

Soldiers stand in formation with 98k rifles. Both hooded and unhooded front sights can be seen.

A closer view of 98k rifles.

Another view of Wilhelmi's rifle.

Kurt Hartung (Manfred Krug) carries several hand grenades. One of them, with an elongated elliptical body resembles Nebelhandgranate 42 smoke grenade but it is seen too unclear for positive identification.

Hartung draws a grenade and prepares to throw in in direction of Soviet troops.

Kurt Hartung (Manfred Krug) also has two hand grenades of another model. The body of these grenades resemble Model 39 Eihandgranate but the fuse is different. 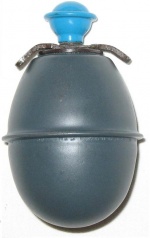 Captured Hartung secretly throws away one of his grenades, not found by Soviet scouts.

Another grenade is knocked out of Hartung's hand by a Soviet scout.

An unxeploded aerial bomb, dropped from Soviet U-2 light bomber, appears to be a Soviet FAB-50.

A soldier carries the bomb.

A ZiS-3 is seen at the background.

Destroyed German tank at the background. It seems to be a mockup, styled after Tiger heavy tank.

In one scene Hartung watches documentary footage from Soviet newsreel. Wartime photos are also seen during the opening credits.

A Soviet sailor with flare pistol.

A DShK is mounted on G-5 class torpedo boat.

An armoured car (supposedly BA-10) and infantry in attack.