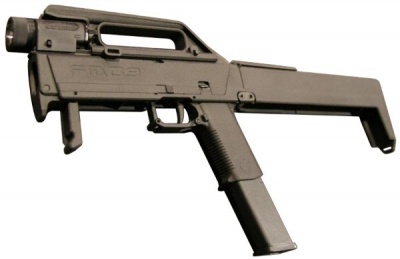 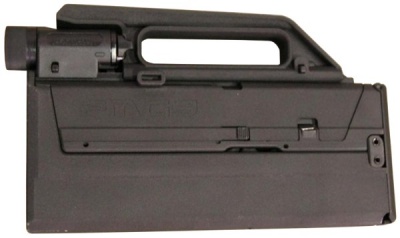 The Magpul FMG-9 was a prototype covert firearm composed of polymer plastic and lightweight metals. It borrowed an old design element originally used in the Ares FMG (Folding subMachine Gun), but more well known from the UC-9 submachine gun, which is the ability to fold up and resemble a harmless looking box. The weapon was built around a modified Glock 18 machine pistol due to its lack of requirement for a safety and its impressive rate of fire. It was developed by Magpul as a demonstration piece to show what they were capable of rather than as a production weapon, and Magpul have stated that they have no current plans to market the FMG-9: this is somewhat unsurprising since in order to do so they would first have to come to a deal with Glock or design an entire new machine pistol to put in the FMG-9 shell. An Airsoft version of the FMG-9 is produced by Magpul PTS (Professional Training and Simulation) and marketed as the FPG (Folding Pocket Gun).

The Magpul FMG-9 has been used in the following films, TV shows and video games: